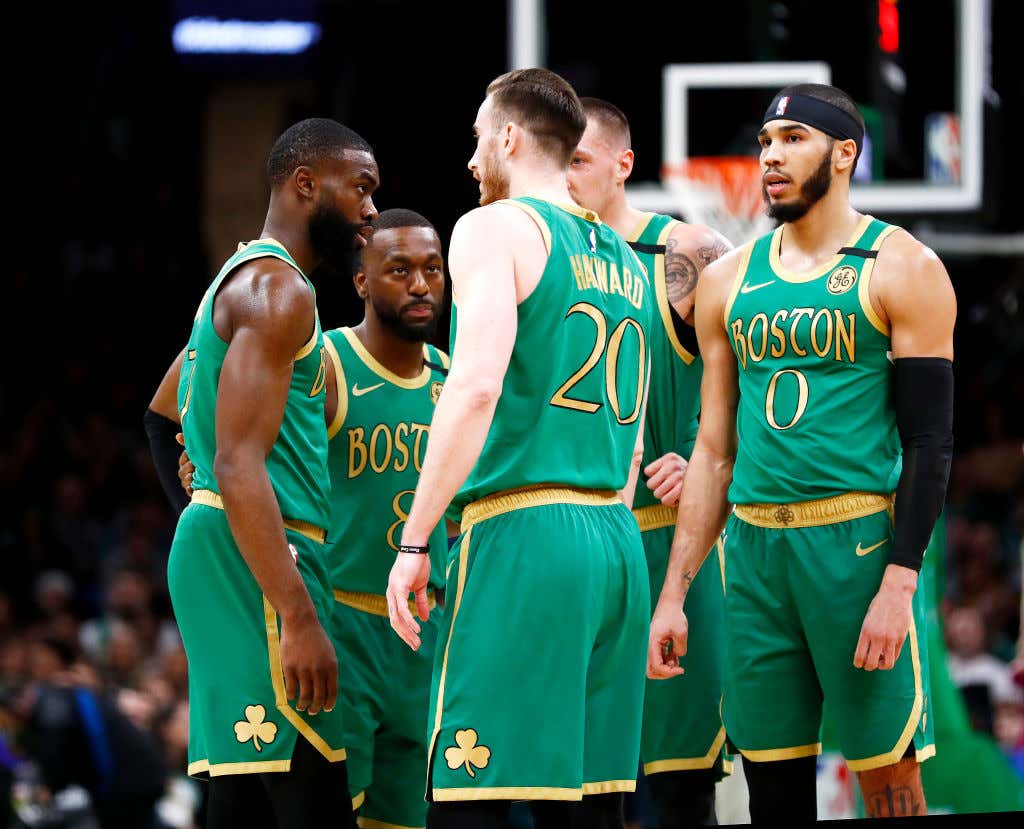 We're only a quick 44 days from the potential restart in Orlando and frankly things are pacing quite nicely. That number seemed much higher not too long ago if you ask me. That's the beauty of quarantine brain I suppose. Well with each practice video that Danny Ainge puts on our timelines I've been thinking a lot of what I want to see from each Celtic once things ramp back up again. Is that weird? Maybe to you, but this is my life. This is what I think about at all moments of the day. Now I obviously tried to be as realistic as possible, and what I mean by that is I didn't want to be like "Tatum continues his March/Feb production for the entire Orlando experience", or things of that nature. That would be awesome, but highly unlikely. I figure once the playoff rolls around Brad is only going to go like 8-9 deep in his rotations, but for the sake of this blog we're going all 15-17 (if they bring on Two Ways).

I think we all want to see this team make a deep run, and these are some things I'd love to see in an effort to make that happen.

The easy choice would just be that Kemba is healthy. But it's basically been an entire offseason so I'm going to assume that's not an issue. For Kemba there is a much more tangible thing I would like to see happen that will directly benefit this team.

I need Kemba to get off to better starts.

If you look at Brad's most consistent starting five of Kemba/Jaylen/Hayward/Tatum/Theis, there are a ton of offensive options available. But here are the facts. The Celts are 20th in the league in first quarter scoring and 27th in first quarter FG%. Getting off to good starts is not exactly this team's biggest strength. That's where Kemba comes in. Did you know he only shoots 41/35% in first quarters? That's the worst of any starter while also taking the second most FGA. I'd love for him to be more in the Jaylen range (47.9/40.5%). He's too important to this offense by starting games in a 2-7 rut or some shit. I'd love to see him be much better production wise to start games.

I don't think it's a stretch to say that during this return the Celts will do everything they can to play through their two young wings. That's how you win in postseason basketball. This season Jaylen has the 3rd highest usage rate on the team which is great, but he also leads the team in turnovers per game and has the highest TOV% of any starter.

That's why for Jaylen I'd like to see him keep his turnovers down despite what will for sure be an increase in usage. He has shown the ability to play more under control, and in the playoffs turnovers are so goddamn important. I'd love for him to drop his TOV% from his current 11.8% down to Tatum's range of around 9.7%. Nothing drastic, but it could really make a difference

The easy answer is we'd all love to see Hayward be aggressive right? Well how do you quantify that. For me, the one area I'd love to see Hayward improve while in Orlando is his FTr. This dude needs to get back to the FT line at a much higher rate. He's shown that his ankle is 100%, he played great pretty much all year, so it's time to bring this aspect of his game back to life.

In an ideal world he'd be around his UTA rate, of around 38%. Last year we saw him at 29% which was understandable since it was his first year back, but this year that number has dropped even more to 18%. That's not going to cut it. He was close to a 6 FTA a game guy in UTA, and is only a 2.5 FTA guy in Boston. I say meet in the middle, but really even getting to last year's FTr would make a difference for a team that has been known to go on shooting slumps.

We all love Jayson Tatum. We all enjoy watching him destroy All NBA defenders on the regular. But here is the dirty little truth that a lot of people don't want to accept. It has to do with Tatum's efficiency against the elite defenses in the East

If you're going to be honest, you'll admit that his efficiency has been pretty dogshit. So for Tatum, I'd like to see him just replicate his season long efficiency against these guys. That's 44/39%. I don't need him to go crazy like he did before the hiatus when he was averaging 47% from deep taking like 8 threes a night. Just don't throw up 4-17's and shit like that which he has done against pretty much all these teams listed.

The easy choice is to not get in foul trouble, but a lot of that isn't his fault due to his brutal whistle. So instead I'm going in a different direction for Theis given what his role is going to be.

I'd love to see Theis fully embrace Playoff Horford and be a legit threat as a pick and pop option from three. He's only shooting 32% from three on the season which is a dip from his 38% last year. You remember how legit Al was at that in the playoffs? His second year he shot 42% from three when they made their deep run, and for his Celtics playoff career he's a 38% shooter from deep. That's where I'd love to see Theis live because the pick and pop is a huge part of what Brad runs.

This one is easy. Shot selection. It's always going to be shot selection when it comes to Marcus Smart because it's the one thing you can never predict. But in the playoffs, poor shot selection may as well be a turnover and I'd love for Smart to take a deep breath before he lets it fly. We've all accepted that we're just going to live and die with his decision, but when touches are a premium we can't see this team waste possessions will low percentage Smart threes. I'm all for him taking them when it comes within the flow of the offense, but it's when he forces things that makes me nervous.

I only want one thing from Enes Kanter. Rebound. That's it. I can live with the brutal defense at times, I can handle the turnovers even if it makes me sick. But I need this man to rebound, especially on the offensive glass. Chances are he's the first big off the bench and given the type of teams the Celts could face, owning then glass becomes extremely important. Kanter can thrive in that role, we've seen him do it all year.

Wanamaker had a weird year. When he was playing well, this team was virtually unbeatable. The nights where he gave you a solid 8/4 with good shooting splits was just the type of bench production they needed. But when he was bad, ohhhhh buddy was it hard to watch. So what do I want to see from Wanamaker?

Play within his role.

When he tries to do too much and forces his shot, disaster happens. But the times where he does his job, defends at a high level (sneaky good STL%), and plays in transition, he's an asset. It sort of reminds me of a young Marcus. When he tries too hard to make an impact he usually does more harm than good. But when he comes in and embraces his role and is solid things tend to work out well.

No brainer for me here. I want to see Rob play every game on the schedule, or at the very least be a healthy scratch for rest, not injury. That's it. That's where the bar is for me. Just get on the floor and stay on the floor. Whatever else he gives you is a bonus. The shot blocking, the passing, the lobs, all great. But if he can't stay on the floor it does nothing for me.

Brad's secret playoff weapon. Did you know Semi is shooting 36% from deep this year and shot 60% from three in his limited postseason opportunities last year? Show me you can be a reliable corner shooter when defenses tighten up on Jaylen/Tatum/Kemba. To me, that's like 38%. During the year he shot 55% from the left corner and 34.6% from the right corner. That shot is going to be there for Semi this postseason, so not only can he earn minutes with his defense, but he can earn them by continuing to knock down open corner threes.

Grant fouls a lot. He has the highest PF per 100 possessions of any regular rotation player, even more than Theis. My guess is there will be situations where Brad throws him into the fire, maybe not in the playoffs but definitely in the tune up games. So I'd like to see him figure out how to defend players without fouling. Of his 149 fouls on the season, 77 of them have been shooting fouls. I know sometimes that's maybe his role, but given the depth of this frontcourt you never know when you'll need Grant to play legit minutes and he can't do that if he can't stop fouling.

Give me all the dunks. Love watching Javonte dunk. Might be one of the best in game dunkers in recent Celtics history. Give me as many fastbreak situations as possible with Javonte on the finishing end.

With the news that there will be no drug testing during their time in Orlando. All I want from Romeo is to just make sure he makes it to the games on time and goes to the right location at Disney. Let's just start there.

I'd love to see a game or two where he lives up to the supersub name. It most likely will not come during the playoffs, but in the ramp up games? Give me a night where he replicates that CLE preseason game with his 8 threes. Just so Brad has that in the back of his mind in the event they need some emergency shooting in a playoff game. He has the type of microwave shooting that could randomly swing a playoff game. What better time than now to finally show that since we didn't really get it during the year.

Please make sure everyone is hydrated during the game and is on the receiving end of a quality high five during timeouts as they walk to the bench.

If he's called up for Orlando I'd like to see him get some run with some of the normal rotation guys. Backup point guard is up for grabs after this season and I'd like to see what Tremont can do. We know he has hands that are quick as shit, he might be the best pure passing point guard we have after Marcus Smart, so I say give him some run if it's a blowout.

Continue to be the most dominant force the NBA has ever seen. That's not a joke either. I think Tacko can be a fantastic secret weapon for like 5-10 minute stretches. Nobody is prepared for a man of that size with his type of quickness and overall dominance. You have to face some legit bigs in Orlando, I say throw Tacko at them and watch them cry out of fear.

So that's it. Some pretty realistic expectations for every player of things I'd love to see once games are back. If they can manage to do those things they'll set themselves up for another potential deep run. Seems pretty easy to me.