CBS Boston - Six former eBay executives and employees are facing federal charges after they allegedly led a cyberstalking campaign against a Natick couple they believed was critical of the company in an online ecommerce newsletter.

“It was a determined, systematic effort of senior employees of a major company to destroy the lives of a couple in Natick, all because they published content company executives didn’t like,” said Lelling.

Lelling said the Natick couple serves as editor and publisher for an online newsletter that covers ecommerce companies. According to prosecutors, members of eBay’s executive leadership team followed the newsletter and took issue with the content and anonymous comments under the stories.

In 2019, two members of the leadership team allegedly sent or forwarded text messages saying it was time to “take down” the newsletter’s editor. One of the messages said the group wanted to “crush this lady,” referring to the editor.

The couple then received a host of deliveries aimed at intimidating them.

“These deliveries included fly larvae and live spiders, a box of live cockroaches, a sympathy wreath on the occasion of the death of a loved one, a book of advice on how to survive the death of a spouse, pornography mailed to their next door neighbors but in the couple’s names, Halloween masks featuring the face of the bloody pig, and the pig fetus which was ordered, but after an inquiry by the supplier, thankfully, wasn’t ever sent,” Lelling said.

On August 18 just after midnight, the eBay employees allegedly posted a classified ad on Craigslist claiming to be from the Natick couple inviting “singles, couples and swingers” to their house to party after 10 p.m. every night.

“People were encouraged to knock on the couple’s door, anytime day or night,” said Lelling.

All of the employees were fired by eBay following an investigation. Lelling said the company cooperated with investigators.

“For a while they succeeded, psychologically devastating these victims for weeks,” Lelling said.“The result as alleged in the complaint was a systematic campaign fueled by the resources of a Fortune 500 company to emotionally and psychologically terrorize this middle-aged couple in Natick, with the goal of deterring them from writing bad things online about eBay.”

A wild one out of Natick, MA today. (Shout out Doug Flutie).

Shake your head all you want at these 6 employees' actions, but they can play for my team any day. Talk about pride in the company. You know how hard it is to find employees that give a shit about your business? At all? Nevermind go to lengths like this to defend it? It's unheard of.

There's a saying that business owners love to preach- “I want my employees to act like they own the company.”

These eBay 6 did exactly that.

You wanna get on your keyboard and slam the world's online marketplace? Send some eblasts out talking down on the internet's premier auction site? Encourage your minions to leave negative feedback reviews across the board? Yah?

Well, how about a box of fly larvae and cockroaches delivered right to your doorstep via next day air?

Granted, traveling to the home of the family in lovely Natick, Mass and conducting "covert surveillance" is a bit much and pretty fucked up, but if you haven't received a dead pig mask in the mail from somebody trying to send you a message then are you really even living?

(Btw, they sell dead pig masks? Who exactly created the demand for such a thing? And are they on some sort of watch list?)

Look how fucked up this is - 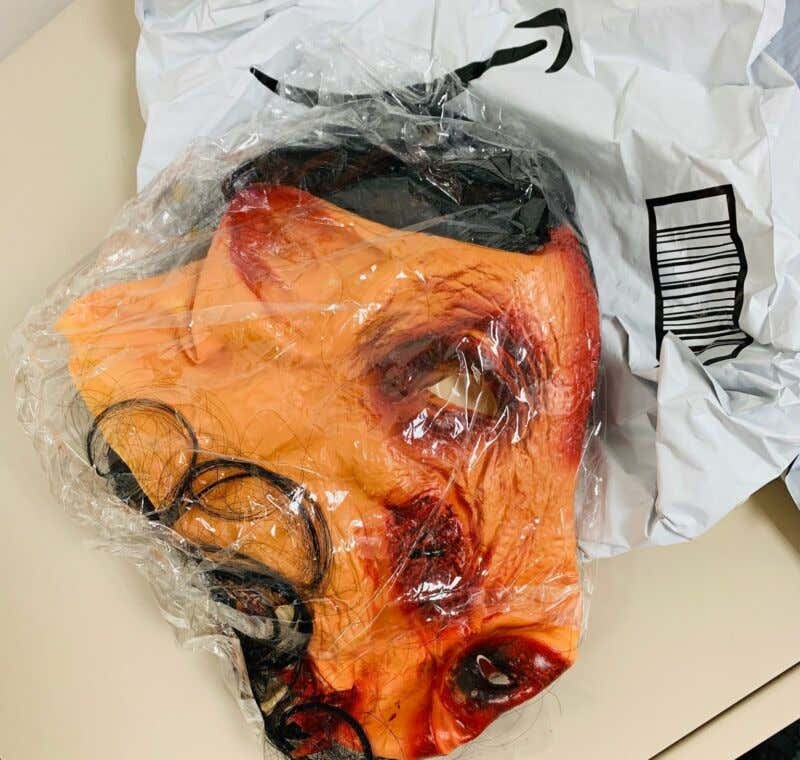 If that doesn't get the point across than I don't know what else would.

The most thoughtful and unique move had to be the craigslist ad.

On August 18 just after midnight, the eBay employees allegedly posted a classified ad on Craigslist claiming to be from the Natick couple inviting “singles, couples and swingers” to their house to party after 10 p.m. every night.

“People were encouraged to knock on the couple’s door, anytime day or night,” said Lelling.

There were also some other special deliveries. Fly larvae? What kind of sick fuck thinks of that? And the funeral wreath and books about losing loved ones is way over the line. These employees were ruthless.

In all seriousness though fuck these eBay people. This had to have been a year from hell for the Natick family. Living in constant fear of opening their mail or seeing the UPS guy standing on their front steps. This is one case where the people suing a large company deserve to be compensated. What's really messed up is this wasn't some rogue employees on a warpath. It was known up the chain of command and possibly even ordered.

When asked if further charges could be filed against other executives, Lelling said “The investigaton is active and ongoing.” Two unnamed executives are included in the complaint that had roles above Baugh.

“I don’t think I would characterize the conduct as rogue, because as seen in the complaint, the directive to do something about this goes pretty high up the chain within eBay,” said Lelling.

Part of the investigation included what role former eBay CEO Devin Wenig may have had in the incident.

“The internal investigation found that, while Mr. Wenig’s communications were inappropriate, there was no evidence that he knew in advance about or authorized the actions that were later directed toward the blogger and her husband. However, as the company previously announced, there were a number of considerations leading to his departure from the company,” eBay said.

p.s. - I have a blog that's been in the pipeline on Yelp that will post later today. I pray somebody comes after me with cockroaches and spiders in the mail. It will be a welcomed reprieve from the daily phone calls, emails, and DM's from their salespeople extorting/offering to sell us "partnerships" where we pay them so they highlight positive reviews rather than negative ones.

p.p.s. - Everybody loves to talk about Mr. Woltz waking up to find his thoroughbred's head in his bed as the message in the film.

But for my money, the better intimidation tactic was mailing the fishes in the rolled-up newspapers. I'm a big fan of subtlety. ("Speak softly and carry a big stick." - Teddy Roosevelt)

I'm also a big fan of horses. Live ones.

Also "Luca Brasi sleeps with the fishes" is an ALL TIME line.