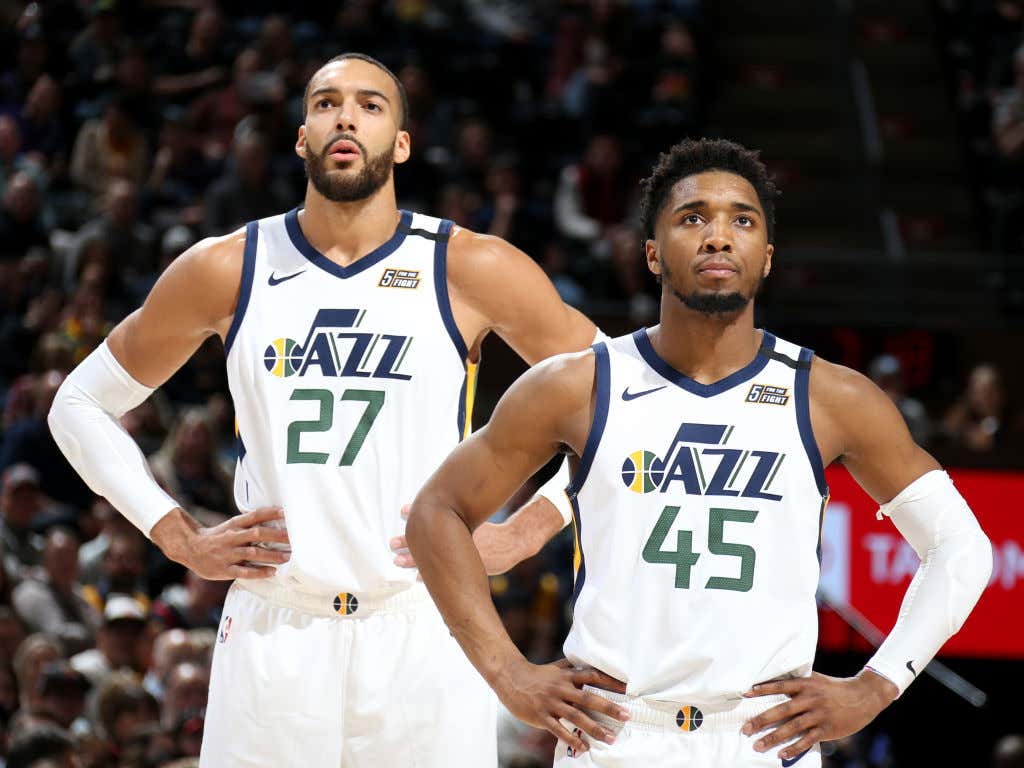 Ah, Rudy Gobert...remember him? There was speculation that the Jazz would have to break the Gobert/Mitchell duo up because they hated each other after they both came down with coronavirus. Well Tim Bontemps had a nice little nugget in a story that came out earlier today about the potential future of both Donovan Mitchell and Rudy Gobert

No one surveyed said that potential frostiness between the two will be the driving factor in any major roster decisions for the Jazz.

"I think it's fine," an Eastern Conference executive said. "The Jazz have no interest in trading either guy, and I don't think it's leading to the breakup of their team."

But people did point to the potential uncertainty surrounding Gobert's contract moving forward. Unlike Mitchell -- who will be a restricted free agent in 2021 and is all but certain to get a full max offer from the Jazz -- Gobert can become an unrestricted free agent next summer.

If Gobert and the Jazz are unable to agree to an extension, several people said they could see Gobert becoming available in trade talks.

"They're not Stockton and Malone," a Western Conference executive said. "It's a different time. There's not a lot of guys like that anymore."

If you take a step back for a second, this isn't all that shocking. This is how business works in the NBA. If you have a big salary player that you can't reach an extension with, you have to trade him. We see it time and time again. Rudy Gobert has a $24M salary next season before UFA, so obviously the Jazz need to make a decision. If they don't extend him they can try and trade him again come the deadline, but his value is going to tank since a team will only get him for half a year. Seeing as how he's unrestricted, unless it's worked out that whoever he gets traded to he agrees to sign an extension, nobody is going to give up anything of real value for half a year of Gobert.

It's a similar situation with guys like Oladipo. Teams can't afford to just cross their fingers and hope it works out and then be left with nothing when the player walks. You have to trade them early.

The question then becomes, what on earth would Gobert's market be? I'm not someone who thinks Gobert provides little value to a team. I mean he's as good a rim protector as you are going to find in today's NBA. His defense is an asset. But are teams going to be lining up to throw a ton of money on a guy who is offensively limited? I will say what he does have working for him is potentially hitting the market in the summer of 2021. While every team is carving out cap space for Giannis and some of the big names that could be available, a lot are going to strike out. At least there will be teams with space and you can bet that to bring in Gobert it's going to cost a pretty penny

So who should even consider trading for him if he becomes available?

What if the Bulls are looking to get out of the Otto Porter Jr business and that contract and are willing to throw in Wendell Carter Jr or something to sweeten the deal. They actually had a decent defense this year (13th) and adding Gobert will only help. Plus he's not going to be taking shots away from guys like LaVine/Baby Dirk/Coby White.

What about a potential center swap in ATL? Find something around Clint Capela and have Gobert be the defensive anchor of a team that desperately needs it. Collins stays at the 4, you have a P&R option with Trae Young, and again a team that really needs to improve defensively if they want to make the top 8 gets help. From the UTA side, you can Gobert-Lite at a more reasonable price for the next three seasons.

You always have to factor in the Knicks, because trading young assets for an offensively challenged big salary player is totally a Knicks move. Let's be honest here too. Is any free agent better than Gobert ever coming? Probably not.

What if the Warriors are willing to throw in their picks plus Wiggins? Do you know how terrifying a defense of Klay/Draymond/Gobert would be? That's pretty damn intriguing considering you wouldn't need to worry about touches once Klay and Steph are back.

If I had to guess, I imagine Gobert is going to sign an extension. Especially if the Jazz have a nice playoff run, but there is risk. We've seen Gobert be played off the floor based on certain styles and that has to be a factor in whoever considers trading for him/signing him. He's this weird type of player where his production is pretty dominate, but he plays in the wrong era for most teams out there outside of UTA.