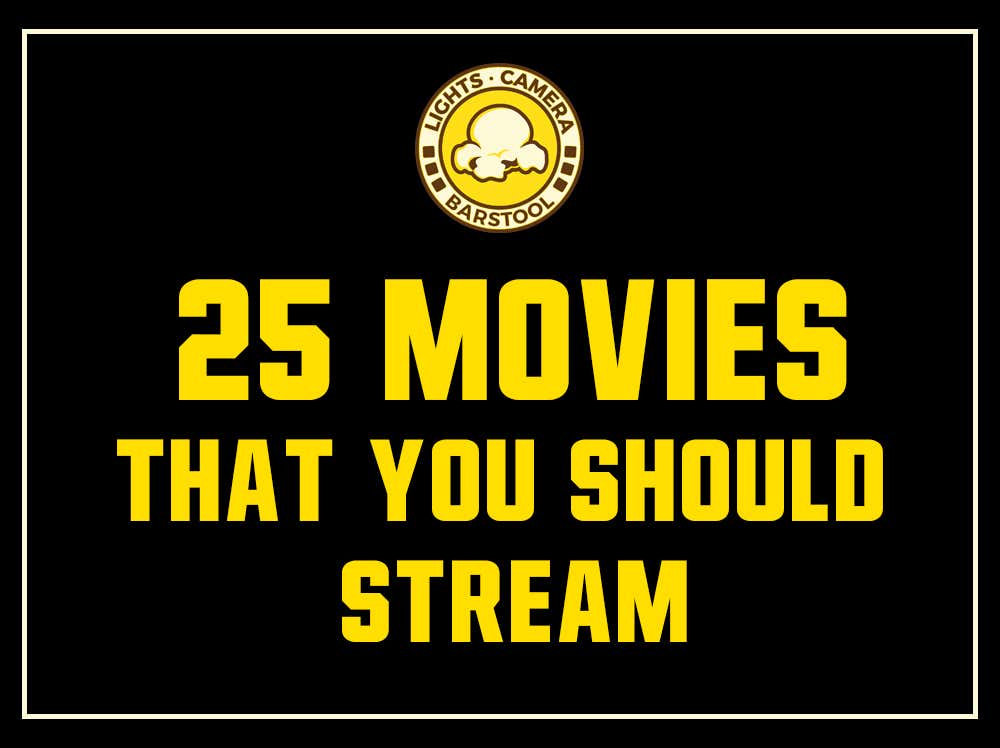 To me, this ranks among the best psychological thrillers ever made.

3. Monty Python and the Holy Grail

Much like I do with anything Mel Brooks, I will always include Monty Python movies when I can for these. This still holds up as one of the funniest comedies ever in my opinion.

One of the best cult movies you'll ever watch, this started my fandom for Bruce Campbell that carried over all the way into 'Burn Notice'.

Considering it's one of the better 90's rom-coms, I'd imagine you've already seen it. Why not give it a rewatch?

This movie didn't get nearly enough play considering how entertaining it was. Absolutely EXPLOSIVE ending.

This GIF should be all the convincing you need. Look at the size of that fucking DUMPER of an ass! Cheeks for god damn weeks.

Me and Trill talk about this and other Studio Ghibli movies a lot on the pod, and this is one of their best. It's beautiful and the english voice cast is lowkey stacked with Billy Crudup, Claire Danes, Minnie Driver, Billy Bob Thornton and Keith David.

I know it made a ton of money, but this movie still feels underrated to me. It doesn't seem to creep it's way into enough best-of rankings considering how funny it was at the time and how well it still plays.

Bar-none one of the best war movies ever made. We were lucky enough to talk to Vincent D'Onofrio about his experience on set if you're interested to see how faux boot camp went.

I probably watched this movie 50 times when I was in high school and I don't regret it. Shoutout to Bobby Lee Swagger for having the coolest name maybe ever. Also, Kate Mara…hello

I know it's a black-and-white movie and maybe 1/1000 people that reads this will actually watch it, but I can't not recommend it.

Another movie that flew under the radar, this has 2 career performances from Will Poulter and John Boyega.

This movie gets overshadowed by the modern comic book movie landscape, but I still love it. Peter Stormare is my personal favorite on-screen adaptation of Lucifer, and Tilda Swinton is also amazing in it.

It's always weird to me that this is a Ridley Scott joint considering what I know him for, but this is one of my favorite road trip movies. It's also one that helped jumpstart Brad Pitt's career.

I have no fucking idea why more people haven't watched this doc. Admittedly, I'm a huge space guy, but still.

It was nominated for an Oscar, but was a pretty huge box office bomb. As someone who normally hates stop-motion, I really enjoyed this and found it to not be as creepy as the other movies that use the same animation technique.

This just makes me sad Rob Redford's acting career is over. This comes in as one of the better sports movies and arguably a top 3 baseball movie ever.

4. The Silence of the Lambs

How the fuck did Anthony Hopkins go from this to god damn transformers movies. Seriously, I cannot wrap my head around that at all.

'The Central Park 5' is both timely and very important to watch. As is "When They See Us" on netflix.