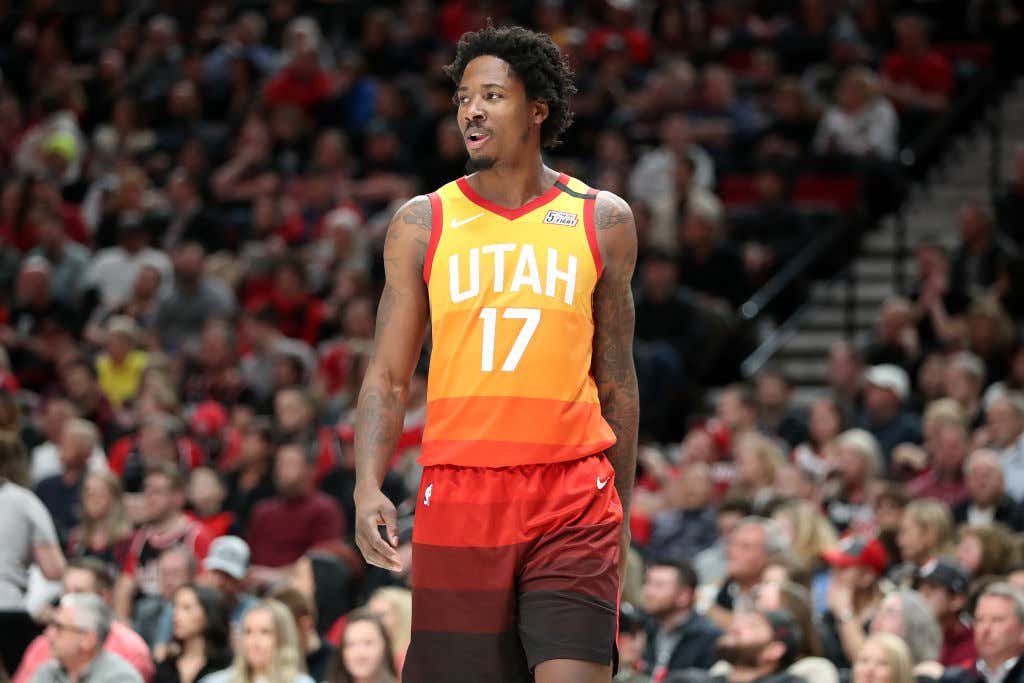 You very well may be asking yourself, "who the hell is Ed Davis?". Well, he's someone who has been in the league since 2010 and is not some someone who you see going out and making public statements in an effort to dray attention to himself. He's made about $34M in his 10 year career and brings an interesting point of view to this conversation about basketball returning. Just like I said over the weekend, it's very important that every side of this discussion is heard. Kyrie's ideas, the ideas he's voicing of other players in the league as the NBPA VP, the economic side, and then the side from guys like Ed Davis. It's all important in an effort to come to a conclusion that works for everyone.

Well in a great interview with HoopsHype, Ed Davis let it all out and brought some pretty interesting points to the table. Here were some parts that stood out

It’s easy for a guy like Kyrie [Irving] to say that he’ll give everything back [for social reform], but would he really give everything back? It’s easy for Dwight Howard to say that we don’t need to play when he’s in Atlanta in his $20 million mansion. But there are other guys on the rosters who need this money to provide for whoever they’re taking care of and things like that. It’s easy for the superstars in the league to say this and how they feel about this and that. But it means a lot more when it comes from the role players and the guys that [aren’t stars]. There are so many different perspectives because there are so many different levels in the NBA. Like I said, it’s so easy for the superstars to say, “Let’s just not play,” and they’re good. But some guys can’t just do that. There are lives on the line and, like I said, generational wealth on the line. These are the hits that we’re going to take if we don’t play.

Kyrie did sort of lose me when he said he would give up everything. Again, we haven't heard he plans to retire right? Someone like Maya Moore, one of the greatest WNBA players maybe ever, did just that. She left basketball in her prime to focus on social justice. This is where things get dicey because some of the more vocal guys when it comes not coming back have already made their money. They financially can handle not playing or a lower salary cap moving forward. That is not the case for every player and why this is so complicated.

Yeah, I think a lot of guys understand that. But, like I said, sometimes the guys that are speaking up, those are the guys that [are set] financially. They can say certain things because they made so much money in their career that they can miss a year. They might be on the back end of their career. Like, with me, I’m on the back end of my career and if I don’t play another game or make another dollar, I’m still gonna be fine. But I just know what this is going to do to the future. And it’s more for the guys that came before us and put in so much work and it took so much to get to this point. To throw that down drain because of a quick, emotional decision? I just don’t think that’s a smart thing to do at all.

I’m with the movement and with every cause. I even thought about this: We, the players in the NBA, could take a percent of the BRI (Basketball Related Income) and give that back to the community. There are things like that we could do and there are too many powerful people in the NBA – with the owners and the players working with Commissioner [Adam] Silver – that if we take a stand and don’t play, we’re not going to benefit from that. We’re going to lose all the way around. It’s just not going to be good. You don’t have enough players who are willing to do that, and I don’t feel like it’s right for a player to force other guys to do that. It’s your decision. If you want to take a stand, take a stand; if not, it’s your choice. But to try to make a whole group do something? Nah, I ain’t really with that.

This was in response to a question about the CBA being ripped up and a potential lockout for the 2020-21 season. That can't be stressed enough as something the players have to consider pretty seriously. Not playing would give owners the right to rip up the current CBA and try and renegotiate to something not as player friendly. To me that seems like it does more harm than good, and I think Davis makes an interesting point about BRI. That would be a cool way to still play but also help the community and the cause.

That's why if there are players who don't want to participate, they don't have to. The league already said nobody will be penalized for sitting out, and I don't think anyone publicly should have an issue with it if that's what a specific player chooses to do. But that also doesn't mean all players should be forced to make that same decision.

Yeah, a lot of them have been accurate, but they’re just taking certain quotes and certain things. So, they’re getting real information, but they’re not getting the whole story; they’re just getting bits and pieces of it. When a quote comes out, you can spin it however you want in your head. The quotes are accurate – because I have been on the calls – but there’s more stuff that’s being said before and after that the general public isn’t seeing.

This was my big takeaway from Friday night. It was so clear who was feeding who and what narrative the league was trying to get out there. Kyrie was immediately turned into a villain when not all of his quotes were put out by Shams/Woj. It's just another reminder that everyone has an agenda. Leaks from the league to reporters and leaks from the players to reporters. It's a clusterfuck.

He would go on to say he was about 99.9% sure that the league would resume, which is nice to hear. It's one thing to get Woj/Shams thoughts on it and another to get it from a vet in the league who was present on that call.

I think Ed Davis brings an interesting perspective to this conversation as someone who is most certainly not a star. He's also not someone that has a huge contract on deck after this season. I imagine there are a lot of other players that share his perspective and concerns. Everyone knows this is a complicated issue and it's not perfect, but the more opinions and points of view we hear from players can only be a good thing. Whether you agree with it or not, this is all part of the process.