I was blogging about Miller Lite vortex bottling technology earlier today when I remembered another distinct line of Vortex technology that completely changed the way we grip and rip things. Instead of beers though we're talking footballs. And instead of You, we're talking about 2-time Super Bowl Champion John Fucking Elway and his rocket laser arm. The fact I remember this clear as day 25 something years later speaks volumes about the Shock Factor of the vortex marketing campaign. I love the idea of some old guy in the room like WHAT IF WE GET SOMEONE TO THROW A FOOTBALL 100 YARDS boom that's how the vortex was born. Then you factor in the whistles which a lot of people considered an upgrade. You'd throw a vortex and you could hear that thing singing in the air 60 yards down field. Only problem is they hurt like absolute fucking hell once the temperature started to dip. Having an older brother and a whistled up vortex in 38 degrees of generally wet weather was a recipe for disaster. Just looking at this thing is giving me flashbacks 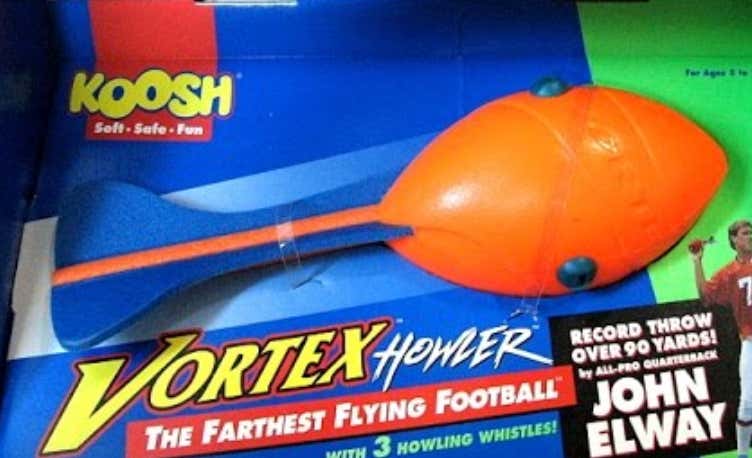 Anyways that's the point of the blog. Just wanted to show you guys that old commercial of Elway ripping it goal line to goal line. Then a couple years later Mike Vick did the same thing except this time with a real football so people just stopped talking about the Elway vortex. That's unfortunate. Here's some Elway highlights anyways.