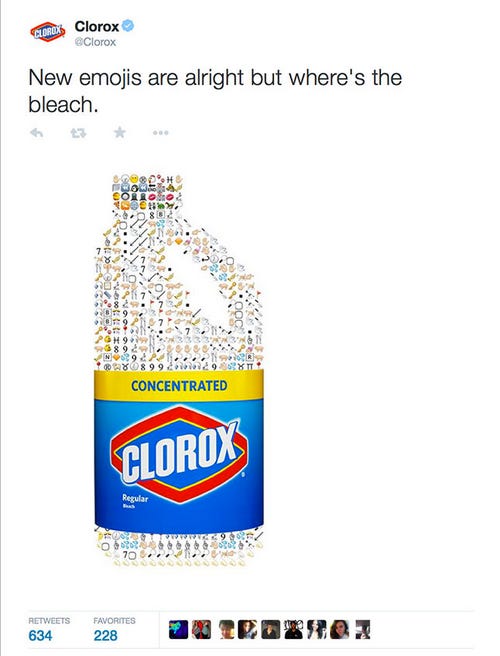 There’s the tweet. I didn’t even understand what people could possibly be upset about over it. I even started looking for other Clorox tweets, thinking something was up and I was confused or looking at the wrong thing, I don’t know. It didn’t really make sense. But alas, that is the offensive, racist tweet afterall. How? Well let me tell you.

CNN – In its tweet, Clorox seemed to be commenting on why bleach wasn’t included among the hundreds of other household items that Apple had added to its list of emojis. But on social media, offense was taken.“You need to clean up your PR person. Put some bleach on your distasteful marketing ideas,” tweeted @DriNicole. “Black emojis were added today. Saying this implies you’d rather the emojis be only white, by adding bleach.”

OF COURSE! OF COURSE THAT’S WHAT THAT TWEET IMPLIES! How did I not realize that tweet implies the social media person at Clorox is a KKK member who is on a mission to make sure emojis stay white!?!? Unbelievable. Like, even when people go crazy on Twitter over things and I say people overreact, I can usually at least see the other side. 99% of the times I disagree with it, but I’m not so dense and stubborn that I can’t at least be like “ok fine, I can at least understand their stupid argument”. Not this one. Not even close. So for whatever reason, Clorox apologized. They should have offered every idiot who got “offended” by the tweet a free bottle of bleach so they could do us all a favor and drink it. But they sent this tweet instead: 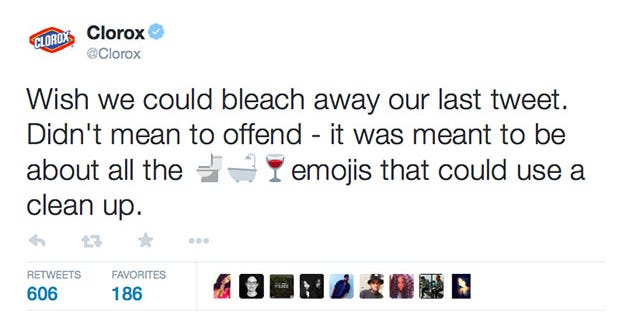 Whatever. There’s no need to bleach away that fucking harmless tweet about adding a clorox emoji. I’m still just slowly shaking my head, in awe that people could actually spend their time getting angry about that tweet. To even have the thought process that Clorox could have meant they want to bleach out the black emojis is mind blowing. Like, I come up with weird shit, I talk about weird shit, I could never in a million years interpret that tweet that way. But that’s where we’re at, I suppose. I hope one day all these companies come together and make a set of Geneva Accords where they agree not to back down to fucking Internet idiots who want to get mad about everything. Probably the same type of person who tweets at pornstars all day. Fucking losers.