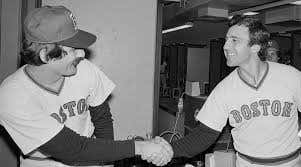 Fearing the impact of free agency, Charles O. Finley, owner of the Oakland Athletics, sells off three of his top players. The temperamental owner sends outfielder Joe Rudi and reliever Rollie Fingers to the Boston Red Sox for $2 million, while sending starting pitcher Vida Blue to the New York Yankees for $1.5 million. Fingers and Rudi both put on Red Sox uniforms but never appear in a game as Commissioner Bowie Kuhn cancels the deals.

The Oakland Athletics were a dynasty as the 1970s began. After four decades of meandering in the second division through three cities, the A’s won the American League West in 1971. Oakland would lose to the Baltimore Orioles in the ALCS, but soon became the talk of the sport as they won three straight World Championships.

The Swingin’ A’s were as colorful as their Kelly green and yellow uniforms. In an era in which clean-shaven players were the norm, Charlie Finley paid his players to grow mustaches. The great mustache brigade featured stars like Reggie Jackson, the 1973 MVP, Vida Blue, who won the MVP, and Cy Young in 1971 and Catfish Hunter, who won the Cy Young in 1974. It also included Rollie Fingers with a handlebar mustache who became the first star closer in the new era of relief pitchers.

Things began to fall apart for the Athletics in 1974, as Finley failed to pay a bonus to Catfish Hunter leading him to become free to sign with another team after it was ruled that Oakland was in breach of contract. The A’s won their fifth straight division title in 1975 but were swept by the Boston Red Sox in the ALCS, ending their championship reign.

When the 1976 season began, a new CBA was worked out after a brief work stoppage in Spring Training. The new agreement would allow players whose contract expired after six seasons could become free agents. Charlie Finley was not independently wealthy and could not afford to play the big contracts his stars would deserve. The sell-off of the Athletics stars began in Spring Training when Reggie Jackson was traded to the Baltimore Orioles with Ken Holtzman for Paul Mitchel, Mike Torrez, and Don Baylor.

The Athletics under their first-year manager Chuck Tanner were 28-31 and in fifth place, 11 games behind the first-place Kansas City Royals. With some of his top players about to depart at season’s end, Finley, at the June 15th trade deadline, decides to sell his top players. Joe Rudi and reliever Rollie Fingers to the Boston Red Sox for $2 million, while sending starting pitcher Vida Blue to the New York Yankees for $1.5 million. Fingers and Rudi both put on Red Sox uniforms as the team was in Oakland on the day of the trade. However, neither get in a game as Commissioner Bowie Kuhn puts a halt on the deals. Kuhn would later vacate both deals, citing that selling players could damage the credibility of the game and upset competitive balance. Finley would file a $10 million lawsuit which would later be dismissed.

Rollie Fingers, Joe Rudi, and Vida Blue all returned to the Athletics. The A’s would have a strong second half and made a run at a sixth straight division title, but fell three games short with a record of 87-75. Rollie Fingers would sign with the San Diego Padres, while Rudi ended up signing with the California Angels. Vida Blue would spend one more season in Oakland before he was traded to the San Francisco Giants. The A’s would plummet into the abyss in 1977, finishing in last place with a record of 64-98.