So we had ourselves a little news dump early this morning as a judge ordered the unsealing of a letter sent by Rob Manfred to the New York Yankees about their alleged sign stealing in 2017. First of all, it's insane we're still doing confidential letters. Why are we hiding things Rob? Any letter about alleged cheating or an MLB investigation should be made fully available to the public. Before we get into any of this, that letter should absolutely be opened regardless of what it shows.

Now why is this unsealing happening? There is an ongoing lawsuit involving Draft Kings players suing MLB based on the league wide sign stealing a few years ago. The Yankees were investigated and were found to be improperly using a bullpen phone. Basically Larry Rothschild is an idiot and didn't know what he was doing. It wouldn't shock me if there was some stuff back in 2015 or 2016 either considering the rules were either vague or non-existent in preventing the decoding of signs. Nothing is going to be worth noting the way I see it, but sure let the Red Sox and Astros fans have their fun for a few minutes I guess.

Now what's the weird part of this story everyone is freaking out about? Well people keep pointing to the Yankees not wanting the letter opened.

The Yankees argue the letter would cause “significant reputational injury,” Judge Jed Rakoff said in his order, and the letter is not to be unsealed until June 19, so the team has enough time to make an emergency appeal. People with knowledge of the case said it is likely the Yankees will do so.

Listen that's a weird thing to say no doubt, but it very well could be just avoiding making this public again. I could be wrong and it could be something else, but I really doubt Manfred covered up a giant scheme to avoid it being public knowledge. Then again we're talking Rob Manfred here and he should be given zero benefit of the doubt. I'm very curious to see what the letter has to say, but I think if you're a Yankee-hater here you should be tempering your expectations. They used the letter in court which makes it evidence. That means it has to be unsealed for public knowledge. It seems like more procedural than anything. Don't tell that to Carrabis.

The plaintiff has no case anymore, and the court held that what MLB wrote in confidence was irrelevant to the court’s dismissal of the plaintiff’s case. Under established law, this supports the Yankees’ right to confidentiality required by the Commissioner of Baseball.”

Added a Yankees official, speaking on the condition of anonymity: “We’re not doing this to cover up some smoking gun.”

As I've said countless times, I'm sure the Yankees were doing something similar to what the Red Sox were doing with a guy on 2nd base. Every team was. I'm not saying Apple Watches, but I'm sure there was some tomfoolery in the video room. The rules weren't in place to stop it back then. They were told to stop and they did. The Red Sox did not. We know this already.

When the Red Sox investigation was going on I really didn't put much effort into it because it wasn't on the level of Houston's cheating. There's a large difference between decoding signs and sign stealing. NO ONE was doing it like the Astros were and that's a fact. If you think the unsealing of this letter is going to uncover an elaborate scheme similar to Houston's then you are going to be really disappointed.

Now isn't it funny how you get a sniff of the Yankees doing something wrong and the assholes come crawling out of their caves. Carrabis is all over Twitter popping champagne and blowing everything out of proportion. He has absolutely no idea what's in the letter, but that's not stopping him from blindly tweeting and screaming at Aaron Judge. Carrabis is a buffoon and we can't hold him to any standard whatsoever, but about players reacting to this?

Are Correa and Bregman really treating this like a win? Jesus Christ guys. You still cheated to win a World Series. You go hiding when you cheat in the worst way possible and avoid any questions, but when the Yankees come up that's when you're ready to talk. It's impossible to be more hate-able than these douchebags.

Bregman already deleted this one. Maybe he read the article instead of just the headline. 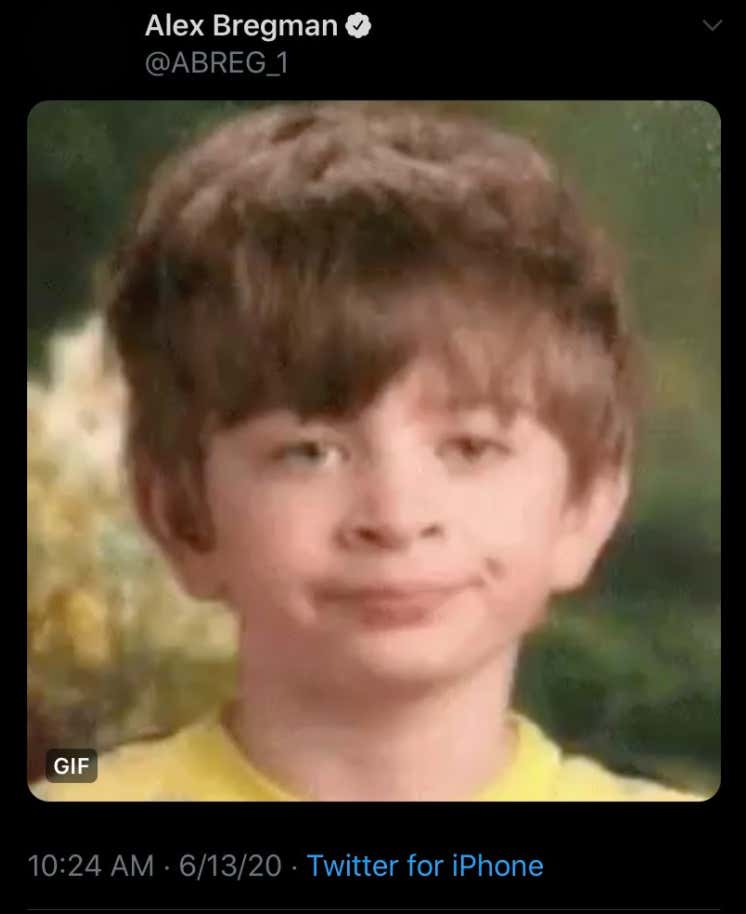 Stop worrying about letters Manfred and just make a fucking deal so we can play baseball. Enough distraction.