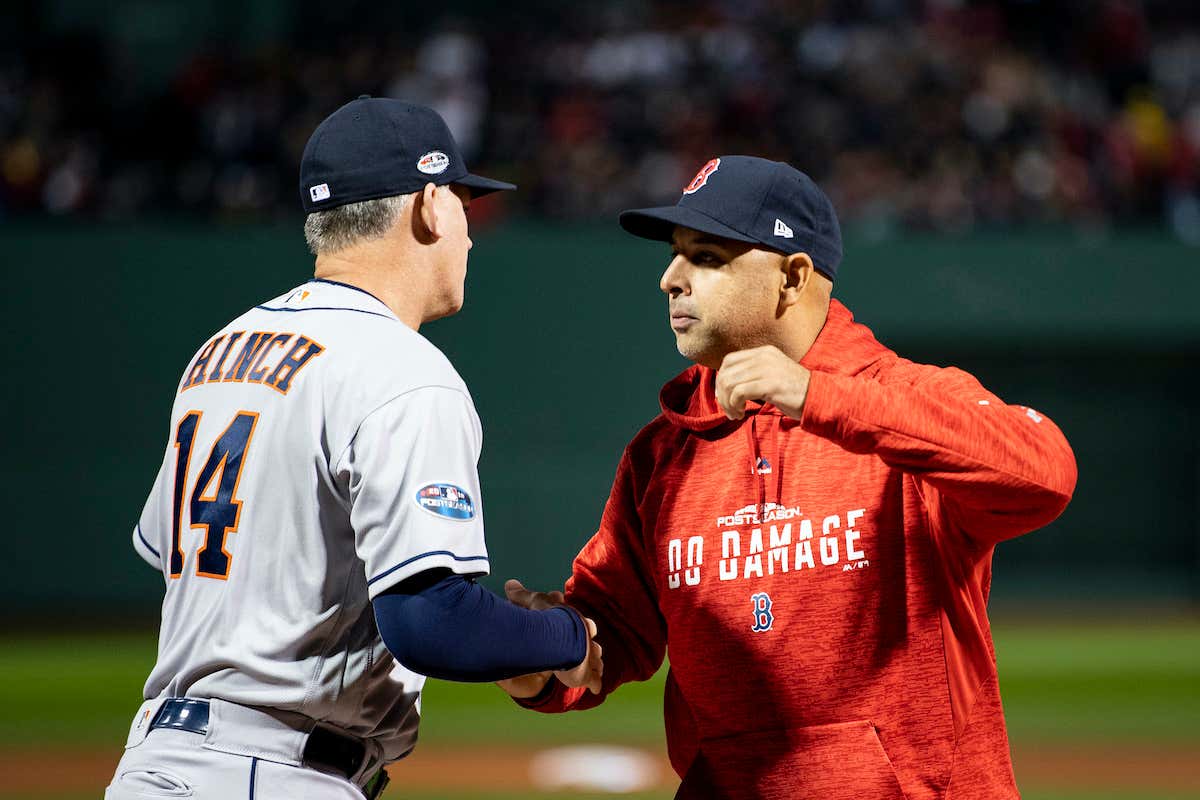 Since being handed a one-year suspension by Major League Baseball for the Astros' sign-stealing scandal (and not a single game for anything Red Sox-related because they didn't do anything), Alex Cora has been silent. Until now.

"There has been a narrative out there of what happened. Ever since mid-November until the commissioner announced the results of the Red Sox investigation, I have read many things that are true and many others that are not," he said. "Out of this whole process, if there is one thing that I completely reject and disagree with is people within the Astros' organization singling me out, particularly [former general manager] Jeff Luhnow, as if I were the sole mastermind. The commissioner's report sort of explained, in its own way, what happened. But the [Astros players] have spoken up and refuted any allegations that I was solely responsible."

He added: "If there is one thing I am absolutely sure of, it is that it was not a two-man show. We all did it. And let me be very clear that I am not denying my responsibility, because we were all responsible."

What this all boils down to is fuck Jeff Luhnow. Fuck him right in his stupid little ass. I said this three months ago that Luhnow was a rat fuck that was lying through his teeth, attempting to use Cora as a scapegoat for what the entire organization was responsible for. Just to refresh your memory, Luhnow released a statement after the the lid got blown off the Astros' sign-stealing scandal that read, "I did not personally direct, oversee or engage in any misconduct: The sign-stealing initiative was not planned or directed by baseball management." That was a lie, according to the Wall Street Journal.

Luhnow also said, "and the video decoding of signs originated and was executed by lower-level employees working with the bench coach." He singled out Alex Cora, didn't have the balls to actually say his name, and did not point the finger at anybody who was actually still employed by the Astros. Hm.

Good for Alex Cora for coming out and saying that Luhnow was full of shit. If you're gonna try to drag Cora's name through the mud, you better be sure that a Wall Street Journal report isn't coming down the pipe to expose your ass as a liar. And that's exactly what Jeff Luhnow is. He's a liar who tried to hang Cora out to dry. Why? Because he was one of the only guilty parties who wasn't still in the Astros' organization. That's why. Luhnow took no responsibility for what happened, said he didn't know that it was going on when that was proven to be a lie, and then he deflected the blame onto two individuals who were no longer in the Astros organization. Scumbag 101.

Also, my favorite part about all of this was when Luhnow tried to say that it originated with Cora, and then it was later revealed that the system was created in 2016 while Cora was still at ESPN. I guess AC was up there stealing signs with John Kruk and relaying them back to Houston's dugout.