We love college football for its craziness, but at the end of the day, it's a very simple sport where the rich get richer, and emerging out of the middle class of programs is very difficult.

There are only 15 teams that can win the national championship this year.

The formula is simple: you must have more blue-chip (4/5-star recruits) among your scholarship players than non-blue-chip recruits (3-stars and lower). On average, P5 teams have 85 scholarships. If you are the head of a program, you have to have at least 43 blue-chip players on your team for a season that you hope to win a national championship.

Now, you may be wondering, why is this a rule? Well, it's just history, folks. No team since the BCS' introduction has won a national championship with a blue-chip ratio lower than 50%.

Looking at teams over the past decade:

Here is this years long awaited blue-chip ratio via Bud Elliott (the GOAT) at 247Sports: 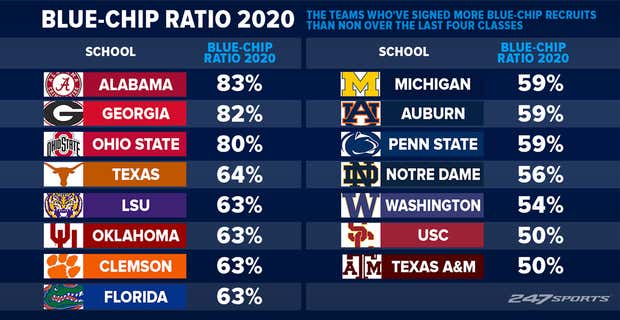 It took us to the 12th ranked team odds wise to find aa team that doesn't meet the blue-chip ratio. The hotels in Vegas aren't tall for no reason, so I think that's a pretty good sign that the BCR is here to stay.

I'm not going to pretend like I'm breaking much news here. The 15 teams who qualify for the blue-chip ratio won't surprise anybody. However, this is just a reminder that the idea of the cinderella team in college football is made up. It doesn't exist.

What teams are right on the cusp? Great question!

-Tennessee & Oregon are just below 40%

On the rich getting richer:

Not only are there more teams meeting the threshold than there used to be, but in recent years there has been a large increase in the number of teams who are recruiting way over the 50 percent mark.

But 2019 saw three of the top four highest ratios ever. And 2020 has the first, second, and fourth (tie) highest rates of blue chips ever with Alabama, Georgia, and Ohio State.