I've said it before, but I LOVE these type of reports. Inject them right into my goddam veins. The Lakers are certainly not excluded from this type of "report" either. How many times have we heard "Team X is interested in Giannis and prepared to go after him" reports? Uhhhhh no shit. Everyone with any sort of cap space is going to be interested in Giannis.

and here we are today with the Heat making it "known" that they are going after both Giannis and Oladipo. Uhhhhhhhhhh no fucking shit. People didn't know that? I'm curious as to how you make something like that known. Is Pat Riley sending a team wide email letting them know their intentions? Is it just leaking the info to Shams? So when everyone was photoshopping and talking about this for months it wasn't "known", but now it is? The whole thing is very confusing. If your curious of how the Heat are going to pull this off, this is what their cap sheet looks like

This does not include Bam Adebayo's new deal, which we can all assume he will have the summer of 2021. He has one more year at $5M and then is a RFA in the summer of 2021. You have to think he's getting an extension. So while that 2021 number will be a little lower, the Heat will make the money work to fit at least a max. Pat Riley knows what he's doing.

Now are they going after both at once, or is Oladipo the back up plan if they strike out on Giannis? Remember, there was some smoke surrounding Oladipo and his future in Indiana

It'll be interesting to see what Oladipo looks like once games are back and then after next season as he comes back fro his gruesome injury. If he shows he can be the same old Oladipo, the Pacers would be silly to not find a way to extend him. He's on a 4/85M deal now, and if he returns to his old form he's for sure worth that deal if not a little more. But if he's not the same player and the Pacers want to move on, I could see him landing in MIA. Why not?

It's not often that Pat Riley doesn't get what he wants when it comes to this shit. We know the move. He dumps all his rings on the table and the next thing you know another star player ends up in MIA. It didn't work with Gordon Hayward when he was the hottest FA on the market, but he's rebounded nicely. He sniped Jimmy Butler from PHI, he's drafted well, and he has weather on his side. I find it hard to believe he's going to strike out again in the summer of 2021. I mean look at this class 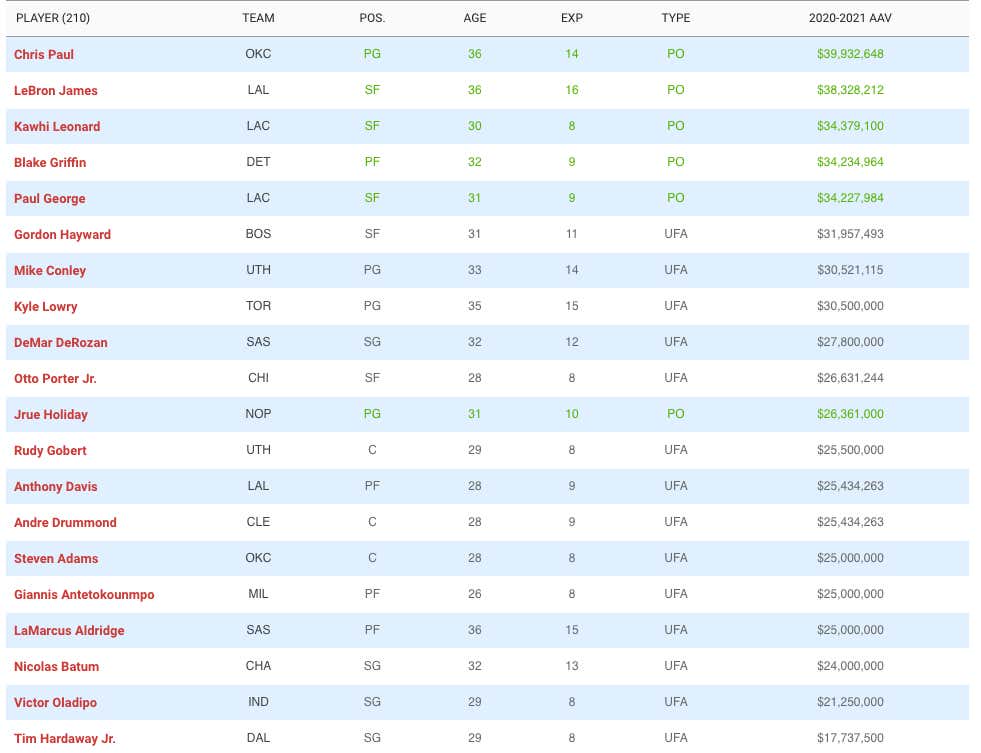 someone from that list is going to end up in MIA. Is now a good time to mention that Paul George is selling his LA home? Look it up.

I just can't get enough of these reports. Things that everyone already knows but we're all so starved for NBA news that stuff like this actually qualifies. Who knew a team with cap space would be looking to add the best possible free agents. Wild concept.

So now I need to know what the next team to be tied to something like this will be. You know it's coming, so who ya got?