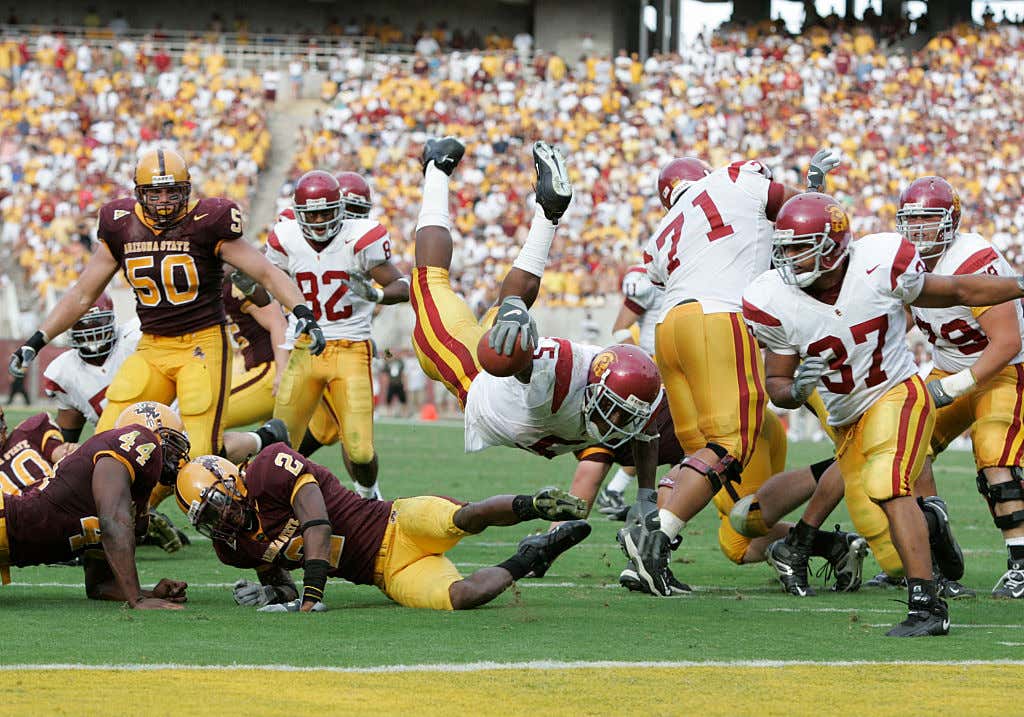 With the Reggie Bush news today I couldn't help but think back to my college days.

If you've been reading my blogs for the last 5 years, you know I am a proud Sun Devil. Deciding to say fuck it and head out to Arizona to attend the Harvard Of The West was one of the best if not the best decision I ever made in my entire life. There were a lot of reasons why it was a no brainer decision for me, but one of the factors was I wanted to see big time college athletics since I was coming from a small school in Worcester, MA. It wasn't so much that ASU had an awesome program, but at the time the Pac 10 was loaded with studs in both football and basketball. I was there from 2005-09 which in my opinion was the peak of that conference. I saw guys like Russell Westbrook, Kevin Love, OJ Mayo, Nick Young, Darren Collison, Aron Baynes, Klay Thompson, James Harden, Brandon Roy, etc in basketball. In football it was all the prime USC guys, Maurice Jones-Drew, Marshawn Lynch, DeSean Jackson, Dennis Dixon, Gronk, etc. You get the point. In my opinion the talent in those sports in the Pac 10 was pretty damn good, certainly much better than what we see today in the Pac 12.

But I can say with certainty there was nothing like seeing Reggie Bush in person. I'll never forget it.

At this moment USC was #1 in the country and 3-0. ASU was 3-1 and #14. Their only loss came at the hands of JaMarcus Russell and #5 LSU who threw a bomb TD in the final minute. We were ready to storm the field and everything. So with USC now coming to town it was a huge, and I mean huge game being played at Sun Devil Stadium. College Gameday showed up for that game. That was only the 3rd time ever and they haven't been back since I'm pretty sure. Normally ASU played their games at night because it was a billion degrees during the day, but for that game it was an afternoon kickoff. I think field level temperature was around 120 degrees or something close to that.  The entire student body had been drinking and partying since like 6am, and I remember 85% of the fans passed out from heat exhaustion after the first half. There were a lot of hot days at ASU, but being in a stadium and sitting in metal stands had to be by far the hottest day of my entire four years there. To this day I have no idea how I ended up back at my dorm (shoutout Manzanita).

I'll never forget ASU jumped out to a 21-3 halftime lead. They started things off with an 84 yard punt return TD by Terry Richardson. After Keegan Herring's TD right before the half to go up 21-3 the place was a madhouse. Everyone that was still alive thought we were going to pull off the massive upset. The student section at ASU was always awesome, but seeing as how this was my freshman year and really my first taste of big time college football, it was even better than I imagined. Yeah, well then Sam Keller that dickhead threw 5 picks, and Reggie Bush and Lendale White got in that ass. Reggie had 17 carries for 158 yards and 2 TDs

The Trojans ended up scoring 35 second half points to ASU's 7. There would be no upset. Reggie had a 24 and 34 yard TD run, and the second one was the dagger that gave them a 31-28 lead. About a minute later Lendale White had his 46 yarder to clinch it. In typical ASU fashion they then lost their next two and finished a classic unranked 7-5 and played in the Insight.com Bowl. Had they held on against LSU and USC, no doubt they would have been #1 in the country.

I just remember that during that game in 2005, every single time Reggie Bush touched the ball all you felt was fear. Nobody could tackle him, he seemed to be 5 steps faster than anyone else on the field, and of all the awesome players I saw during my time there, Reggie Bush was really the only one who ever made me feel that way.

I can only imagine what it must have been like to be at USC during his three years there and being able to see him all the time. I only saw him in person once and I still remember it 15 years later like it was yesterday.