The original Peter Forsberg tweet by Dimitri Filipovic is getting some buzz in the hockey community, and that's great but it is not nearly enough. Looking back at that era from the mid 1990s to the early 2000s before the first lockout I think it is safe to say that Peter Forsberg was the best player in the world. Not Yzerman, not Jagr, not Lindros not Sakic...it was Foppa. If you could create a forward in lab it'd probably come out looking a lot like Forsberg. Fast, strong as a fucking ox(he basically invented that reverse hit that Oshie uses), great shot, elite playmaker, could play center or wing, 200ft player. The only problem with him was the era in which he played because when I think of Forsberg I think of this 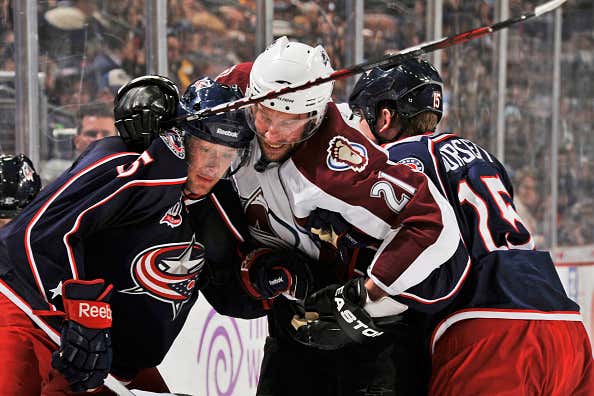 He was the ultimate alpha of the clutch and grab era. He is being straight up assaulted here by two guys. Free hands draped all over him. I guarantee you he fought through it and won the puck and I also guarantee you that no penalty was called. And when you're constantly getting whacked, held, hit, and interfered with guess what...your body is going to break down. And that is what happened to Forsberg. Forsberg played essentially 11 true NHL seasons. He played a full 82 game slate exactly ONE time. Once. And even though he was CONSTANTLY banged up he finished his career well over a point per game in an era that was known for the opposite. The clutch and grab era was so bad and lacked so much offense that the NHL took the opportunity of the lockout to change like...all of the rules. If Forsberg came into the league in 2005 instead of 1995 we'd talk about him in the same breath as Crosby. Someone who had transcendent talent. Instead, while he is in the Hockey Hall Of Fame, he's essentially an after thought when discussing the greatest players in the game. It's a damn shame. I'll put his youtube highlight tape up against any player ever.

He won the MVP, the scoring title, and finished top 5 in Selke voting in his "best" season and in that season he missed 7 games. So good that he out-scored the entire league while missing a good chunk. If I am starting a team from scratch, he would be on it. Dominant player who just happened to be plagued by being born 10 years too early. I love Forsberg, and I want you all to appreciate him too.