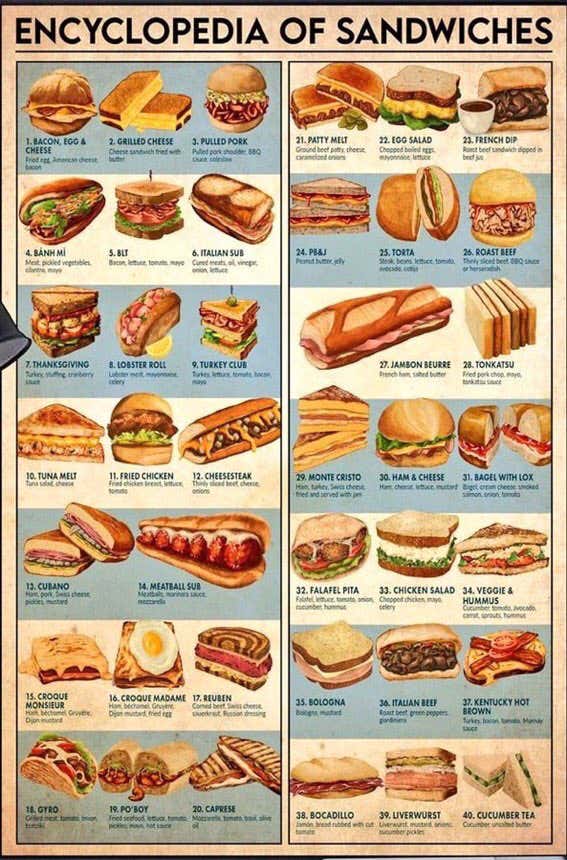 The people wanted a tier. I didn't think the nation was ready for more strife, more adversity, more disagreement. But then I saw how viral the above image started going and realized it wasn't about me. It was about the poor souls wandering this Earth having no clue what the good and bad sandwiches really are. People eating garbage daily under a shroud of ignorance. I now had a moral obligation to tier, and tier I did. Ladies and gentleman, may I humbly present: Sammiches, tiered. 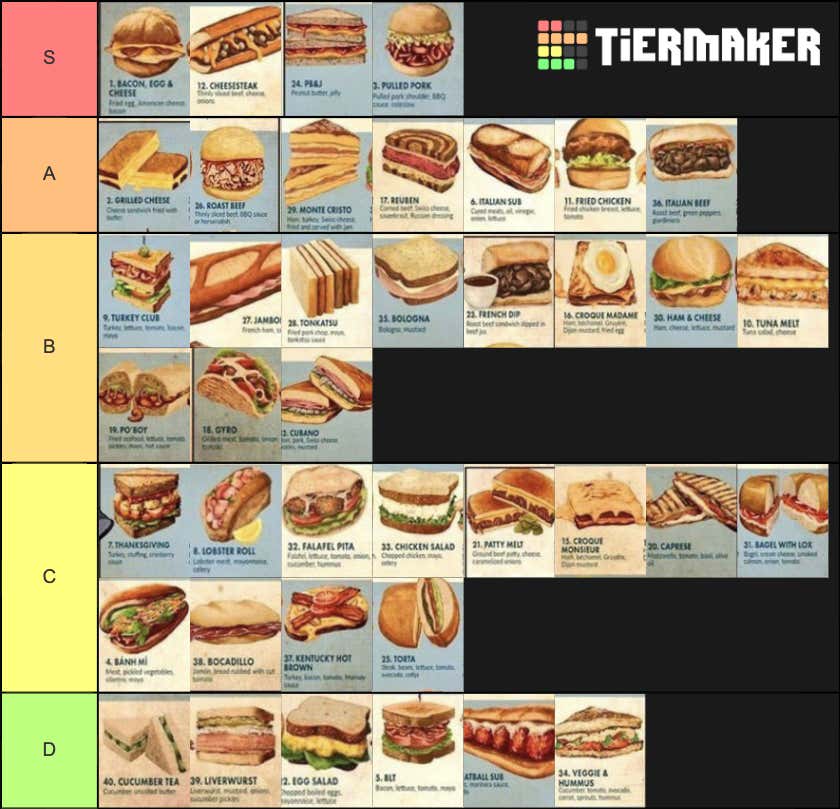 The elites. Everyone always wants to put more in this tier, but honestly four is more than I'm typically comfortable going. There's no shame in being A-tier. But looking at these forty sandwiches I knew I couldn't in good faith leave out the top 10%. Baconeggnchee on whatever bread you desire? Never once failed. Cheesesteak might be my overall favorite on the entire board. If you don't love a good cheesesteak you don't deserve to be talking sandwiches to begin with. Pulled Pork has always treated me and my family with care and respect. I'll never say a crooked word about pulled pork. And peanut butter & jelly. It wasn't the first sandwich ever invented but boy oh boy did it come seemingly out of nowhere to become the staple sandwich in the entire genre. I don't care who you are, what time of day it is, Skippy or Jiff, white or wheat, nothing quite hits the spot like a fresh peanut butter and jelly sammich.

This is why I always say there's no shame in being A-tier. A lot of players don't have rings because they played in the same era as Michael Jordan. That happens to the best of the best. These are the Charles Barkley of sandwiches. Strong enough to claim an MVP in any given season but certainly not contending for any GOAT status either. Grilled Cheese? What a treat. I'm not one of you tomato soup freaks, either. Just give me the bread and the cheese, melted, golden brown, thank you. Monte Cristo was my toughest cut from the S Tier. Easily, and I mean easily, the best named sandwich on the board. And a great meal to boot, but I can't in good faith place it above any of the four above it. Roast Beef, Reuben, and Italian Sub are staples in any self-respecting sandwich shop. They've been pillars of the game for a long time and they'll stick around even longer. Fried chicken is fried chicken. What more is there really to say? Franchises are built on the backs of fried chicken. If I ranked the Italian Beef any lower the city of Chicago would have descended upon my house and dragged me into the streets for a public flogging. If we've learned anything these past few weeks it's that mobs can bring great change. That's what you're witnessing here today.

Salt of the Earth sandwiches in this tier. Not a ton of fanfare but a lot of classic lunchbox classics and working class heroes. I'm sure people are going to be furious over bologna's inclusion in such a strong tier. Those people can kick rocks so large that they leave with shattered ankles. Bologna shows up. It's there for those in need year in, year out. It's beloved by small children the world over. Fried bologna sandwiches are perhaps the most rapped about sandwich. It also may be the single most preposterous word in the English language. Italians do not pronounce it how we pronounce it. The fact that it has sustained both as a cured meat and asinine enunciation vaults it into the B-tier no question in my mind.

Before you start writing emails en masse, you - yes you - haven't eaten a Thanksgiving sandwich since late-November. You didn't even like the last one you ate because you were over the novelty of it before you finished making it. Thanksgiving sandwiches are the "Magna Carter Holy Grail" of sandwiches - cool the day they come out and never again. I know Big Lobster is going to have a field day with this slight as well. Boo hoo. If you want to eat sea roaches you can be my guest. Doesn't mean I have to pretend it's a good idea or worth the $25.

Last and most certainly least: BLTs. Bacon is fine as a role player, but it's certainly no star. An incredible second banana that can really help boost another top tier talent. But with lettuce and tomato? Keep it. I have no idea how this sorry excuse for a sandwich has lasted this long. I can almost understand making it in the privacy of your own home as a light snack. But exchanging legal tender for someone else to construct one on your behalf? With other options on the board? Horrible. You only get so many meals in this life, and you have no idea which one will be your last. You really want to risk your last meal being a BLT? No thank you. Speaking of not getting enough for your dollar: meatball subs. Meatball subs are in dire need of national reform. Because meatball subs haven't failed us, we have failed meatball subs. There's never enough ball in those suckers. Meatball subs should be A or B tier, yet their makers have left them on the bench to rot for seemingly no reason. A change of scenery could be the boost in the arm meatball subs have been looking for. While there's time to save meatball subs, there's no saving egg salad. You're a sick fuck if you're scarfing down egg salad sandwiches more than never. Cucumber tea??? There's one person alive allowed to eat cucumber tea sandwiches and that's the literal Queen of England. Even she could do better but I'd understand. Finally: more like Liver Worst.