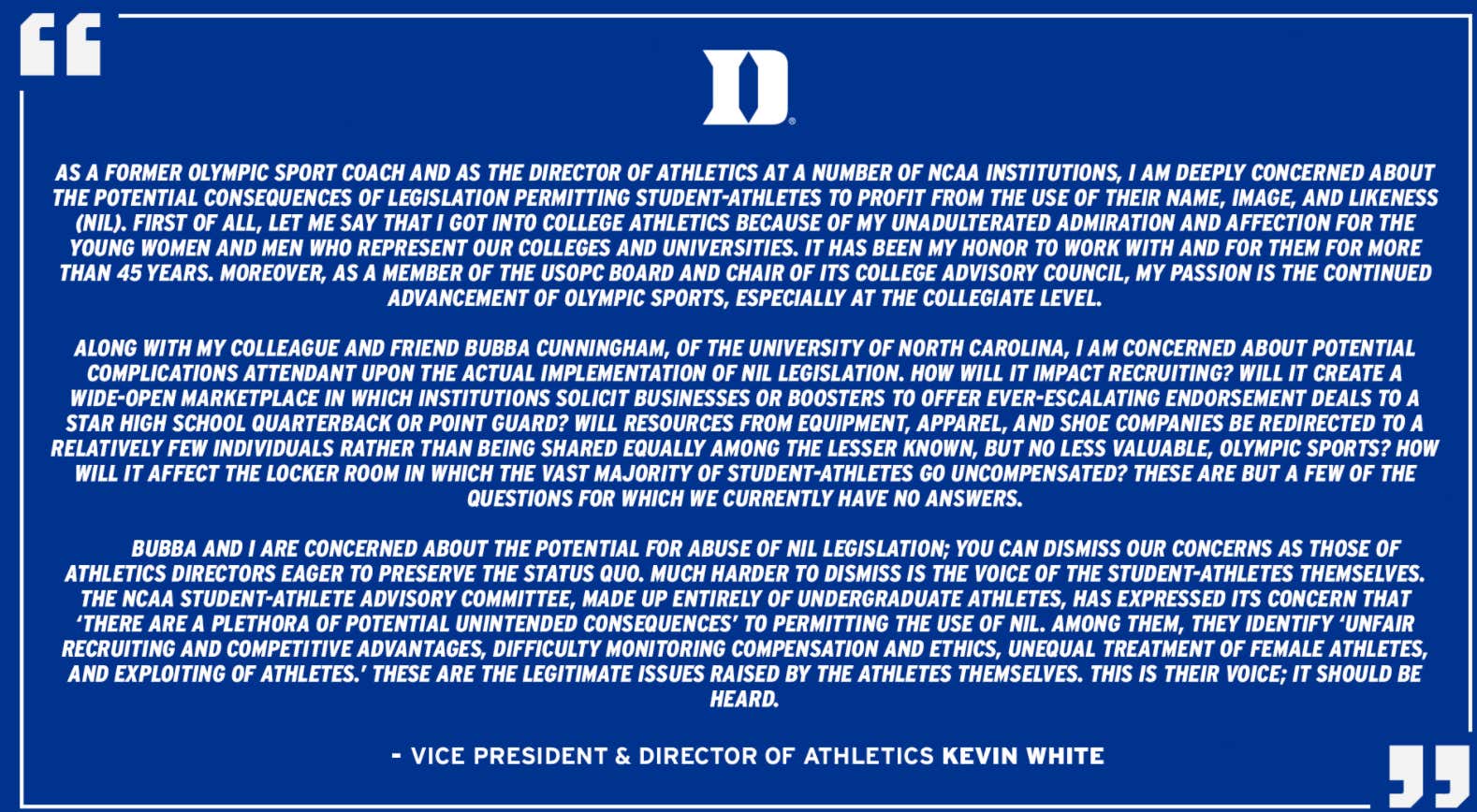 Jesus Christ. This isn't even a Duke fucking sucks post. This is a how can you be this goddamn clueless and put out a statement like this post. Leading with the 'I was a former olympic sport coach.' Yeah, bro people tend to not make money in Olympic sports unless they are big on social media - that's why like Oregon softball and gymnasts were listed as top-10 athletes that would make money on name, image and likeness (NIL).

And then - I can't stress this enough - how dumb it is that he brings up recruiting. Uhh, let's just clarify this again. The AD of Duke - a place with numerous No. 1 classes - is concerned about recruiting? Has he paid attention to college sports at all the last, I don't know, 50 years? People are going to the same fucking programs. There's a reason Alabama, Georgia, Auburn, LSU, Ohio State, Clemson and Oregon get the top football recruits. The top classes in college hoops tend to include Kentucky, Duke and Kansas every year. That's not going to change if people can make money on name, image and likeness. Recruiting won't change. Stop using that as a crutch because you don't want sponsors to go directly to a kid vs the university. It's the biggest lie in this whole debate vs name, image and likeness.

Oh not to mention if he really wants to bring up recruiting we can talk about how K flipped a Team USA deal for recruiting, right? He leveraged being the head coach of Team USA into staying on the board there and is using that as a way for him to talk to players within Team USA's system at the lower level. But, sure, letting players make money on name, image and likeness would ruin recruiting. Recruiting is already the biggest fucking joke in the world because of how people talk about it.

I just don't get how someone like White can speak out here. We're talking about the free market here. People will dictate what these players are worth. The school isn't going to pay them and if you lose a restaurant sponsorship because they deem someone like Zion is more valuable than Duke so be it. That would be how they view player vs program. The likelihood of a program, especially like Duke, losing major money is slim. Players would be getting a cut of the pie, not the whole thing. Just incredible stupidity from a guy making $1.5 MILLION. I don't even care about that to be honest with you because, again, that's what Duke dictates White is worth.

Everything about this is just terrible though. From the recruiting lie to saying it could split a locker room because someone isn't getting as much money as someone else? It's called self-awareness. The 11th guy on Duke's roster shouldn't be paid the same amount as Zion or RJ.

Just let the free market dictate what people are worth. I don't understand how this is difficult. Schools pay with a scholarship, that's it. We cheer for laundry, we don't fucking care if someone is getting $10,000 from a restaurant. We care about Kentucky blue, Duke blue, whatever. Fucking dork.