I love this concept. It's an awesome off-season brain teaser that gets you excited for the season. With that being said, the execution by this was bizarre from ESPN's NFL Nation reporters.

SOURCE-We hit reset on NFL contracts and released every player to the open market. Then we gave our NFL Nation reporters the GM job, allowing them to re-draft the foundations for their teams.

You can read the rest of the rules in the link above. There is much point in getting into the semantics, as the overall theme is: every player is draftable for your new franchise in which salaries do not matter. The goal is to win a Super Bowl in the next 5 years. Of course, ESPN couldn't hold a 53-player draft, so they did just 4-rounds. Every faux GM was required to pick a QB, offensive, and defensive player. The 4th pick can be a wild card. Here are the results: 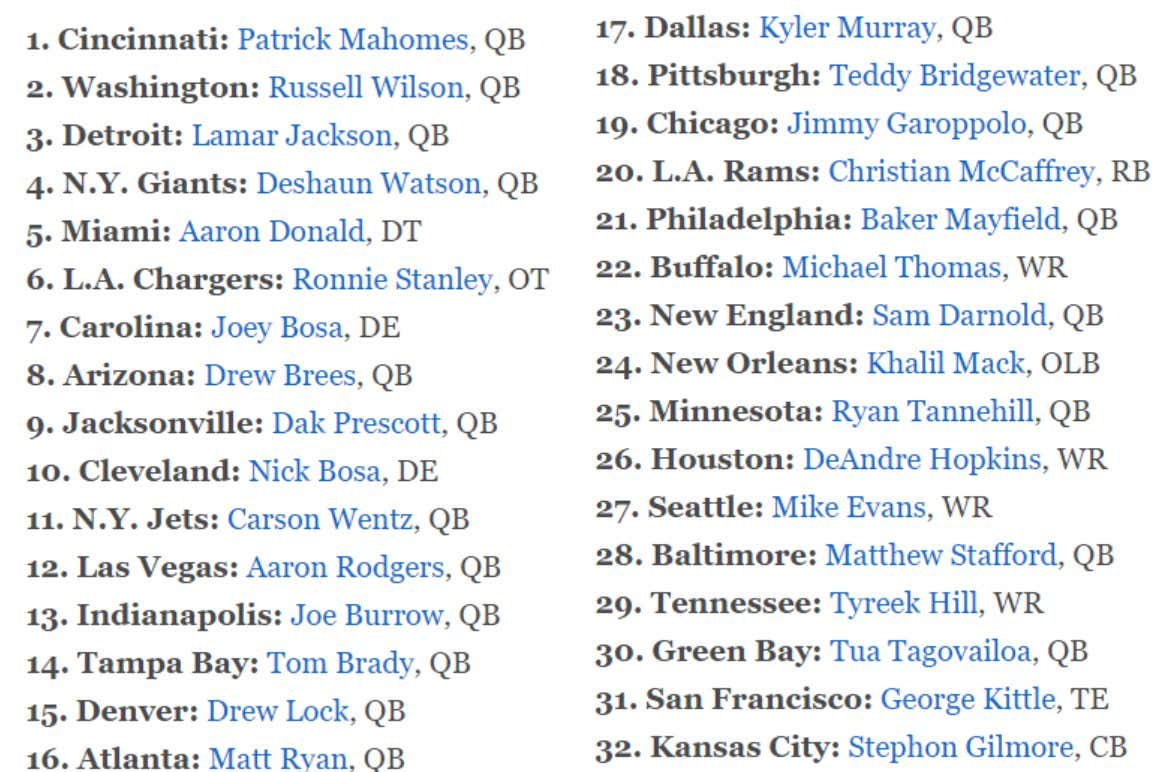 The first 4-picks are great. The issue arises when we get to pick 5. If you are an NFL GM and not picking a QB at any of the top 20 picks, I don't know what to say to you. You could even extend that to the top 25. The most important position on the field is your QB. Yes, I know Aaron Donald is great, but he's just not as valuable as even a Matthew Stafford.

Let's look into some of the questionable decisions.

-Drew Brees at 8 and Tom Brady at 14: how many more years do these guys have left? 2? You're wasting your top 15 pick on a QB that will only play for 2 more years?

-Drew Lock at 15: You're taking Drew Lock over Kyler Murray? Huh? Because he played well in a handful of games to end the season? Don''t get me wrong, I think Drew Lock can have a great career in the NFL, but picking him over Kyler is a weird choice.

-Taking an RB in the 1st round is a sin in anything outside of fantasy football. That being said, you could look at McCaffrey as more a slot receiver than an RB. If you do think that way then I'd say Michael Thomas, Julio Jones, and DeAndre Hopkins are better.

-The hate for Kirk Cousins is weird. Taking Ryan Tannehill over him? Huh? Same goes for Teddy Bridgewater. Cousins didn't go until 69th!!!!!

-Uhhhh where is Julio Jones? Did we forget about him?

-Ronnie Stanley going at #6 is a bit absurd considering for him to be worth the pick you need to have a QB that is very good.

-Surprised nobody took Quenton Nelson. He didn't go until 77th!

-JJ Watt has injury concerns but not being picked until 92nd is absurd. Same goes for Chris Jones. 78th pick? Fletcher Cox...93rd?