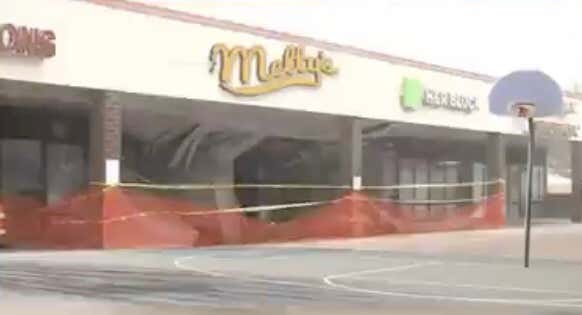 In mid February, when Nick and I first decided to start a podcast that revolves around telling fabricated stories about growing up in the corrupt hills of Wheeling, West Virginia together, we knew we had to start off with a bang. So on the night of Valentine’s Day, we bailed on our respective female dates (sue us) to focus solely on ANUS. And after meeting up at my apartment and housing more twisted teas than a Spencer’s clearance rack, we started drunkenly brainstorming ideas for the “pod.”

I pitched the story of the McTickler, a middle-aged former green beret who'd camp out in our local McDonald's PlayPlace and tickle all the kids who crawled through the tubes, for sport. And Nick pitched the tale of Melty's, a piping hot, under-18 dance club in a nearby Ohio town's strip mall that cranked the thermostat to the max and only served melted root beer floats. We ended up eventually pulling the trigger on both, but Melty's evolved from a whimsical concept to a bizarre infatuation that we couldn’t stop thinking or talking about for weeks. 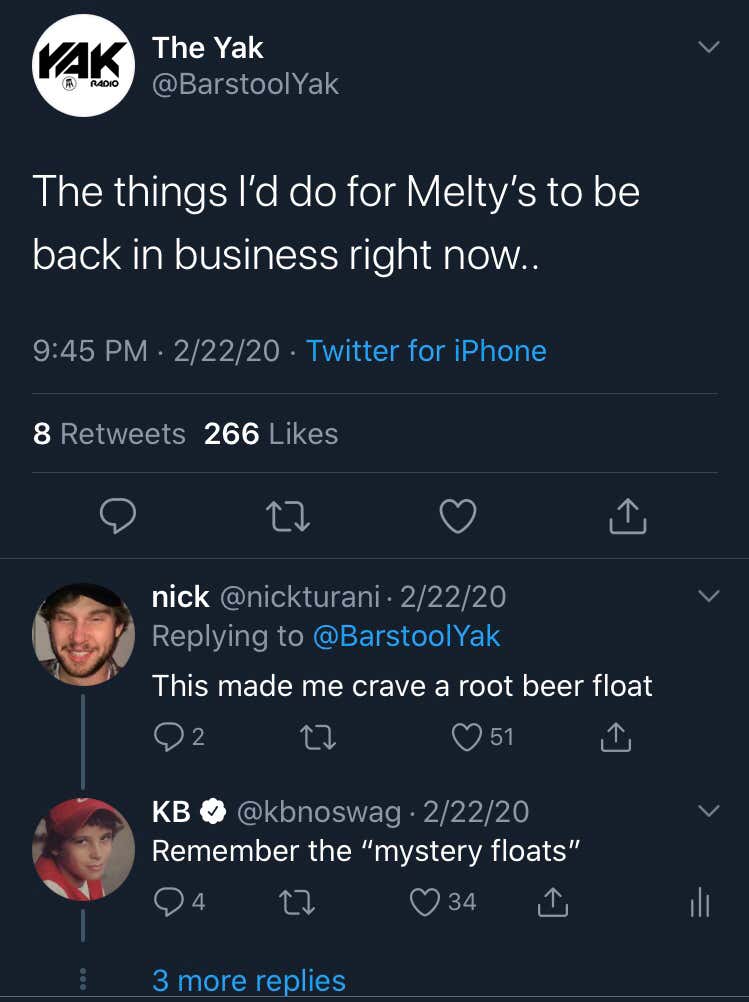 We originally told the story on The Yak, which seemed to elicit a “what the fuck?” reaction from the listeners and cohosts. Fair enough. We then progressed, naturally, to doing Instagram Q&As about the criminally warm underage dance hall. You know, by the common man, for the common man. 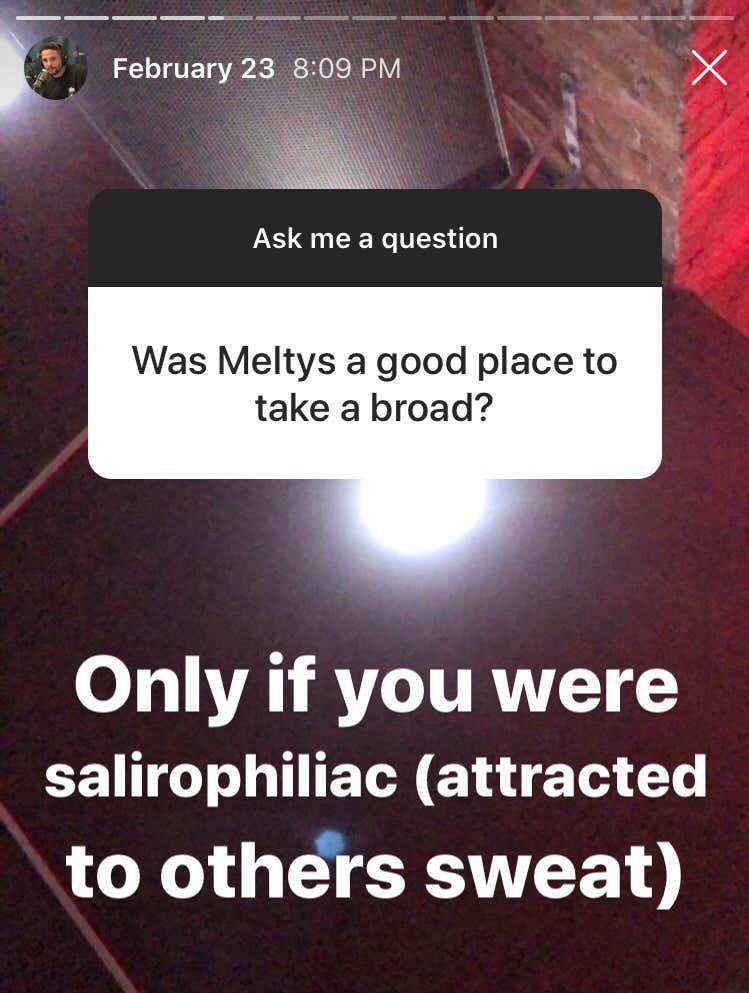 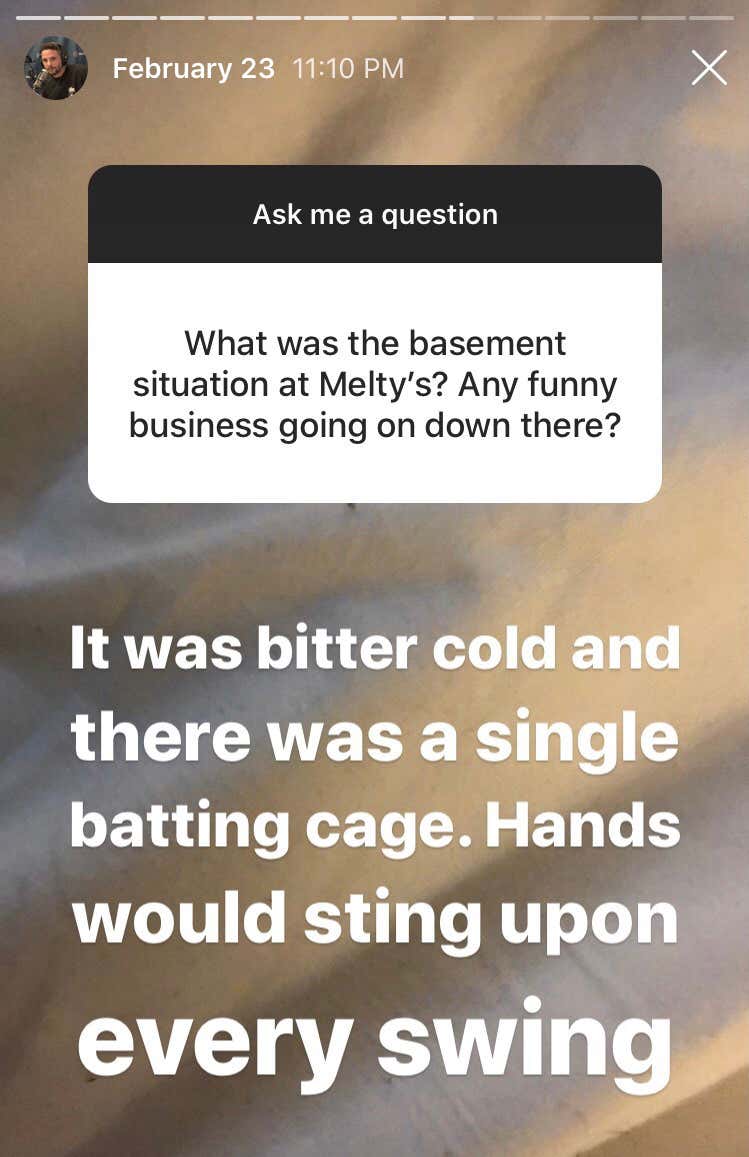 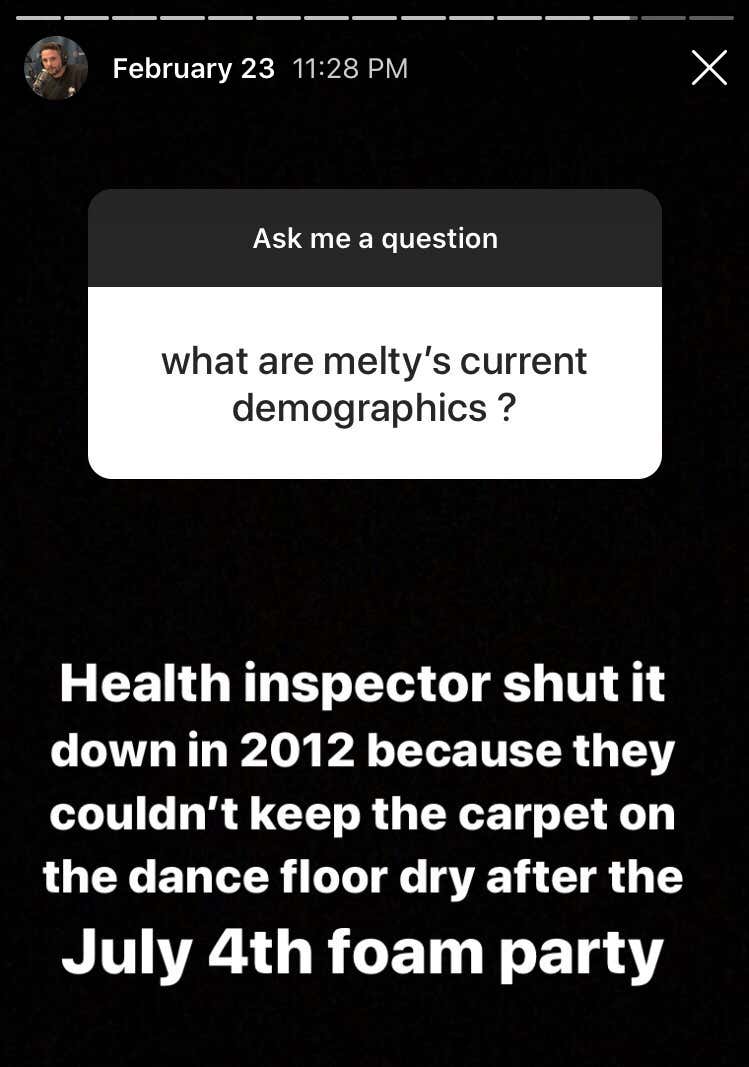 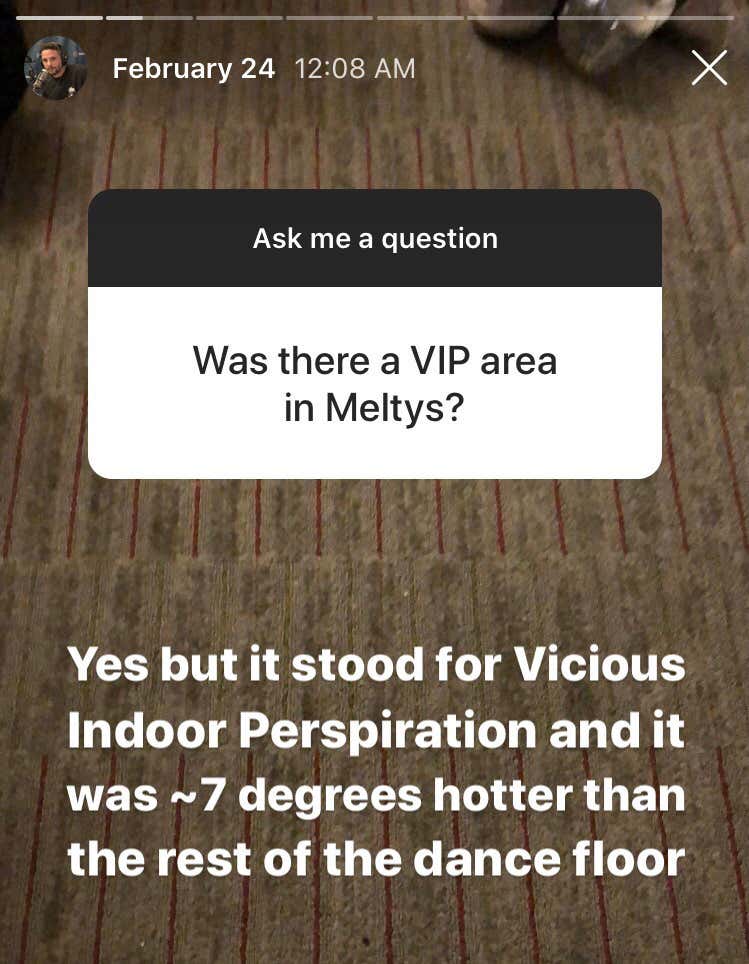 And that led to a full-blown podcast teaser about the mysterious nightclub.

Much like Intern Troy, Melty’s was conceived with the long-term goal of becoming a national phenomenon that sparked some combination of intrigue, shock, and outrage. Except unlike that douchebag Troy, Melty’s somehow managed to accomplish that goal. Unintentionally.

Thanks to a now-infamous hoax map crafted by the warped mind of Jeff Deception Lowe, which depicted our fictitious hotspot as the most popular restaurant chain in Ohio, Melty’s became a U.S. trending topic in a matter of minutes. 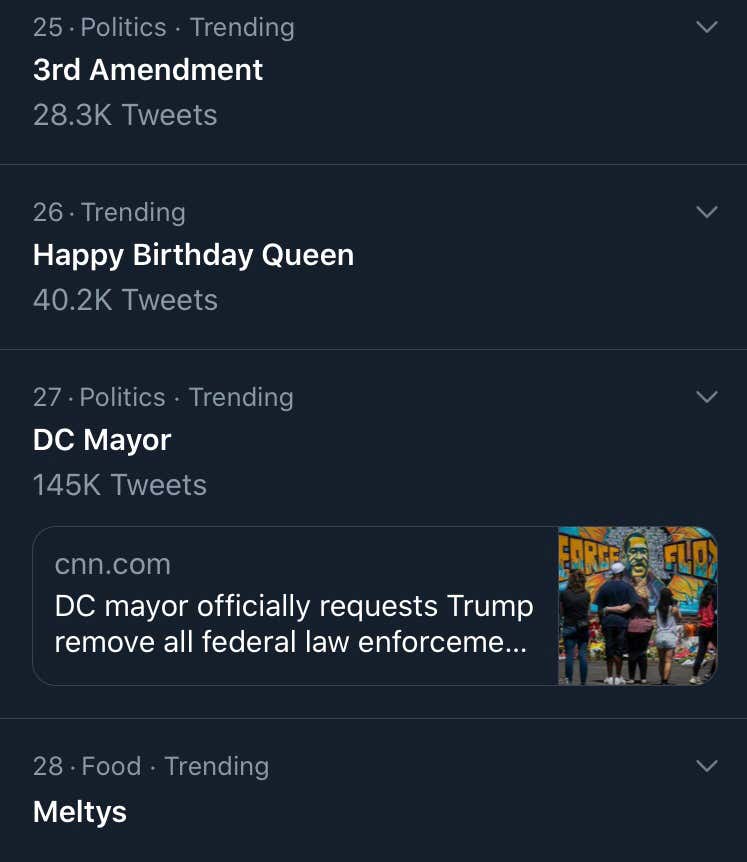 Now I will admit that Ohio gets a bad rap for a state that deserves, at the very least, a lot worse of a rap. In terms of population, it's the 7th largest state in the nation but conducts itself like the 7th largest pianist at a Montessori recital. A uniquely impeccable inferiority complex that causes them to do things like feel extreme personal pride about things like fast food chili restaurants and mediocre roller coasters. So on Friday afternoon, when they emerged from their permanently-stained Brutus Buckeye shower curtains after their weekly bath and logged onto Twitter, they decided to take all of their pent-up frustration on a parody research study. 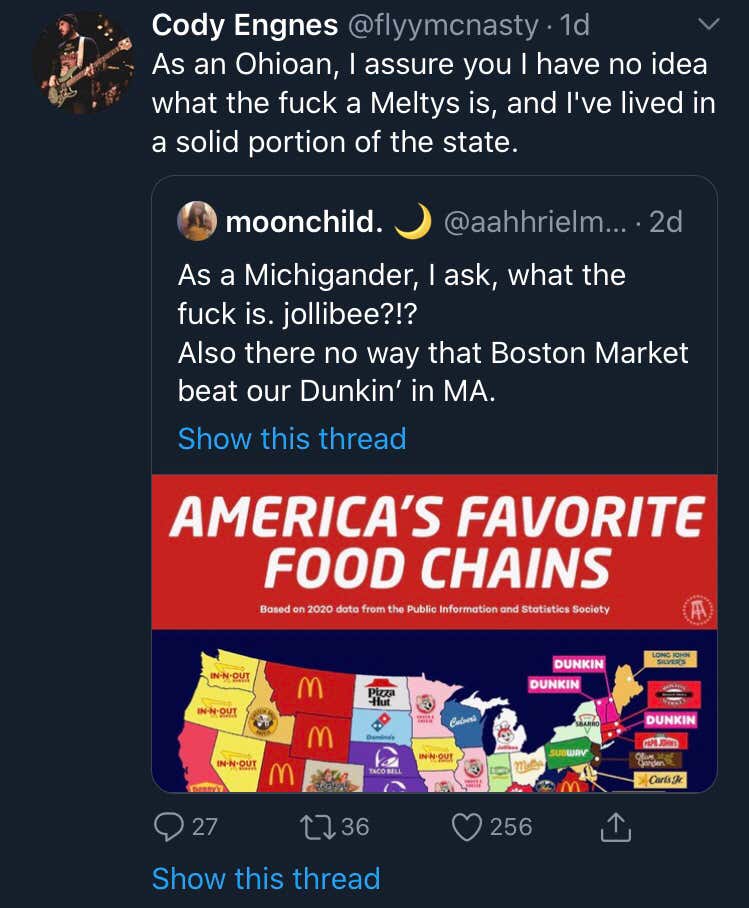 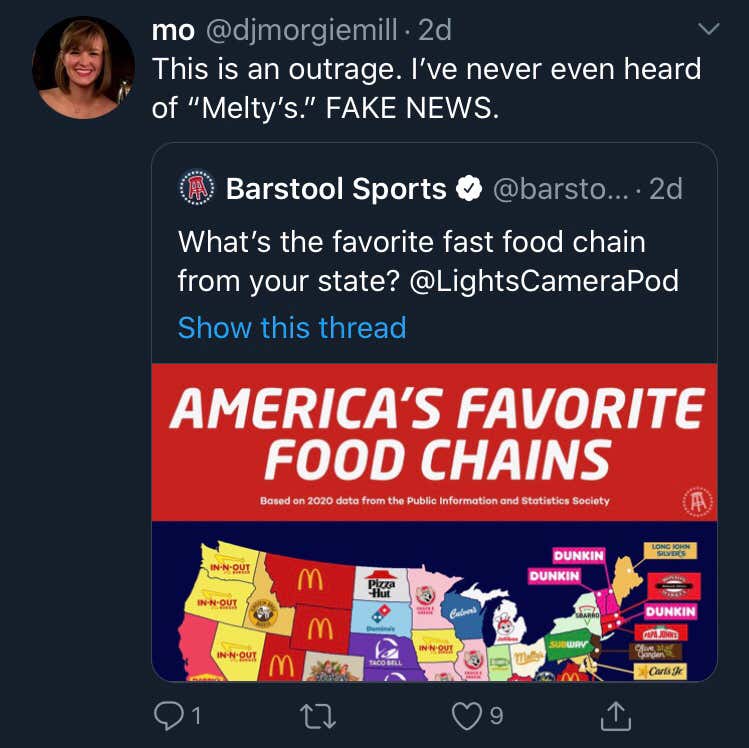 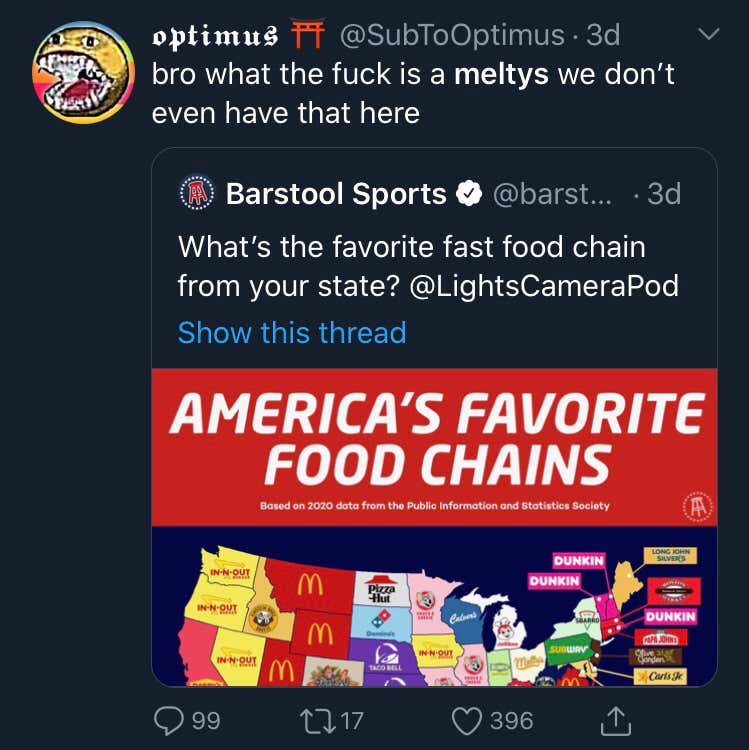 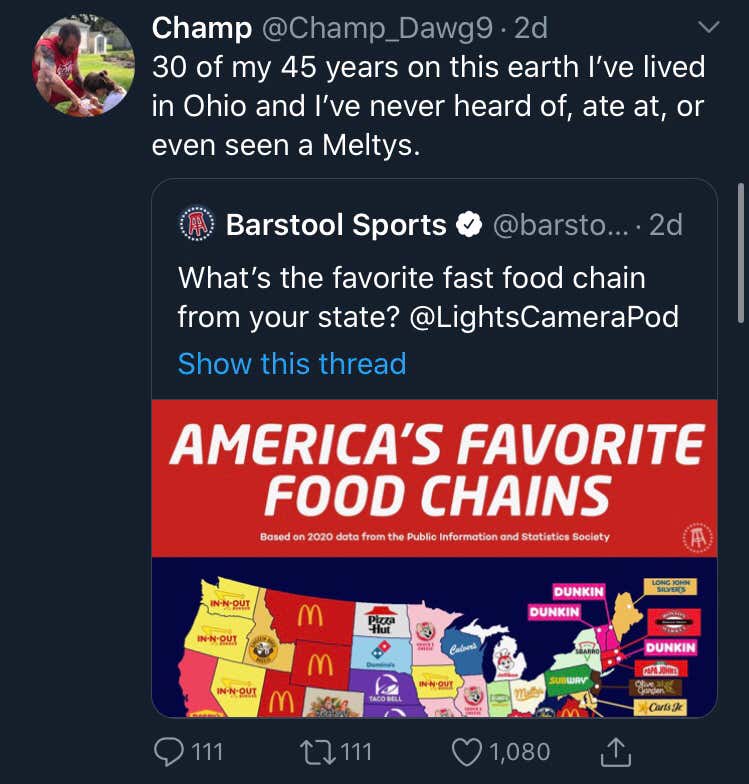 It was fascinating to observe these native Ohioans have such intense breakdowns over PISS data. It was like they were competing in a one-upping contest to see who’s heard of Meltys the least. 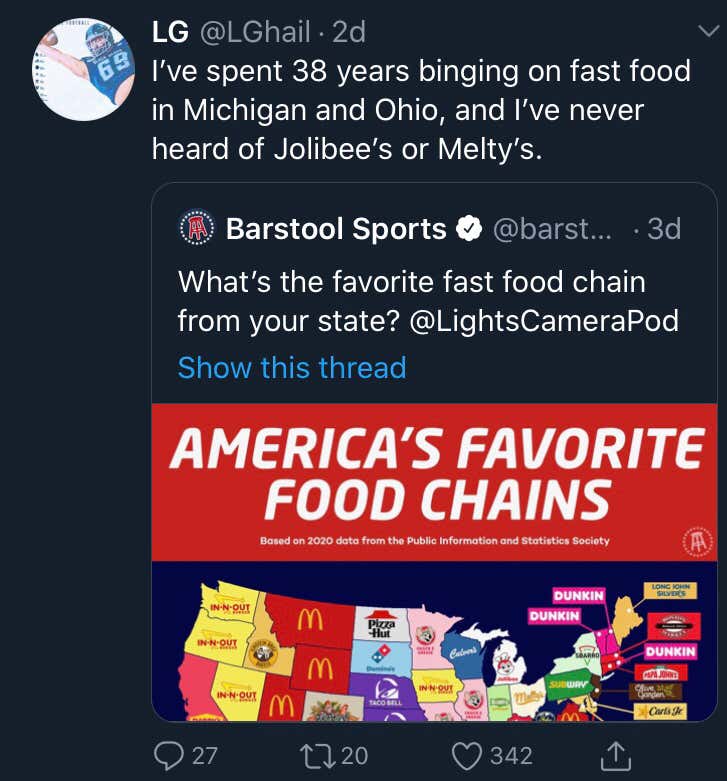 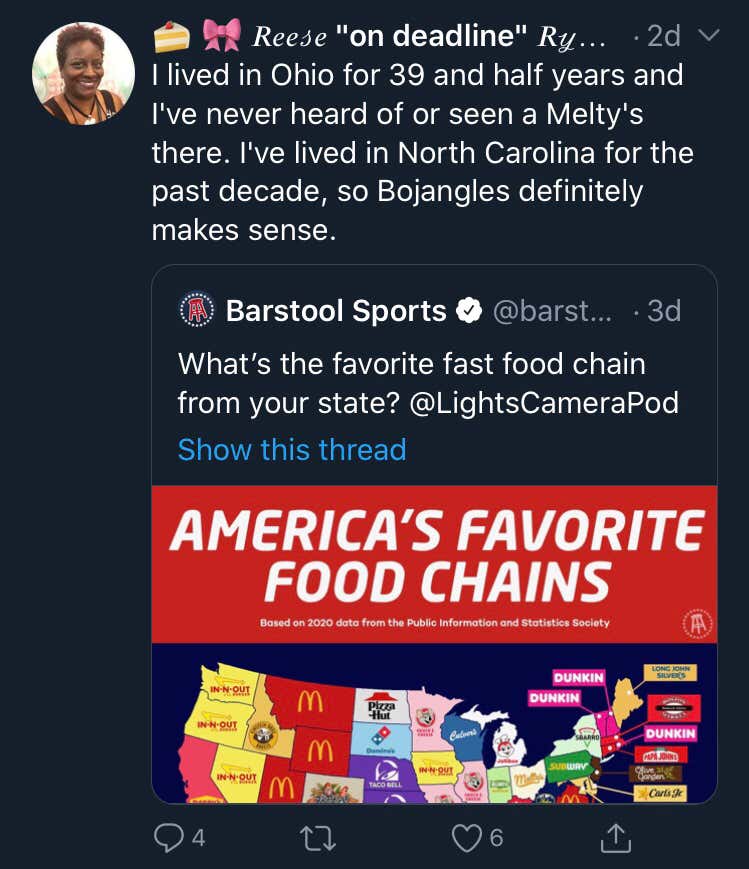 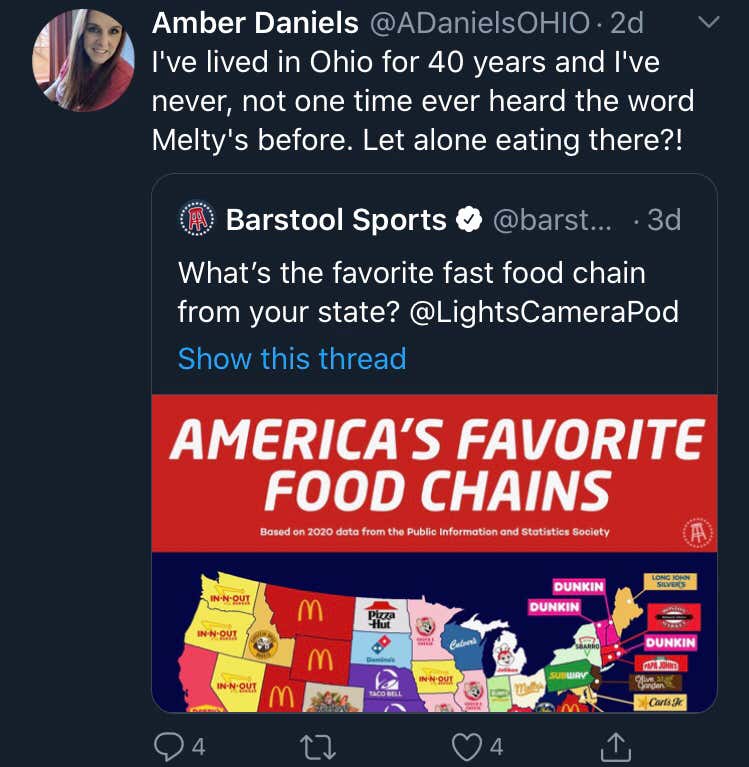 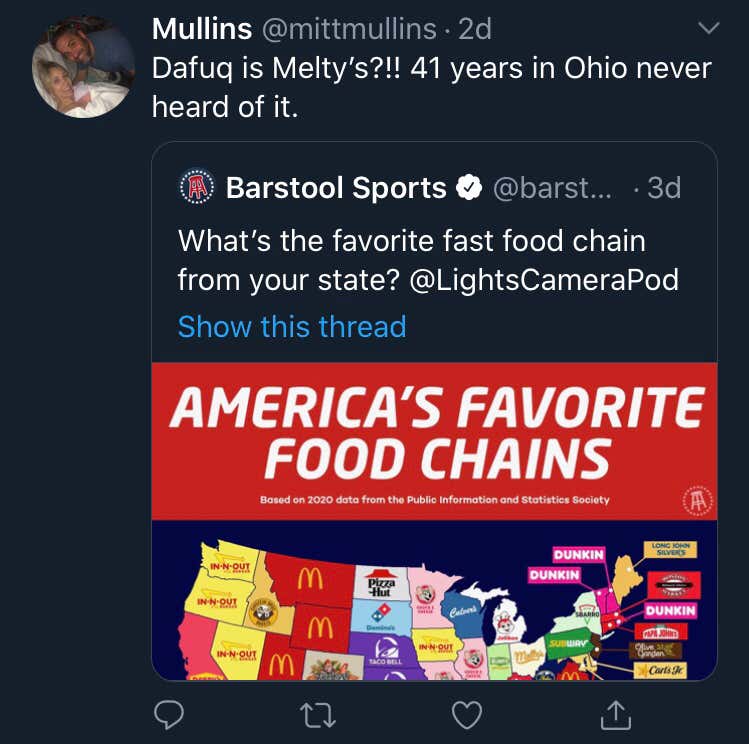 Even some of the state’s most prolific stars were completely oblivious to the pearl of Belmont County. 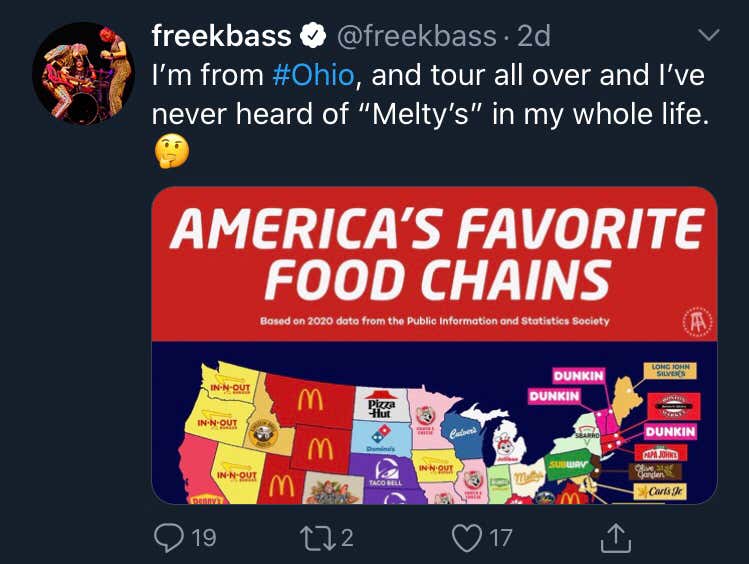 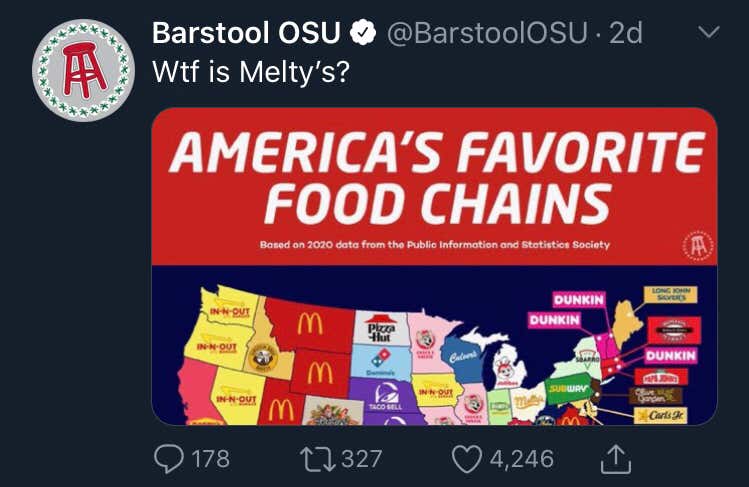 Maybe the Barstool OSU viceroy was too busy telling JV cheerleaders at Bullwinkle’s that he’s verified on Twitter to ever catch wind of such a prominent teen dance club like Melty’s. Whatever. It didn’t matter to me. Any publicity is good publicity. Especially when we’re trying to hit the merch bonus on the permastain shirts. 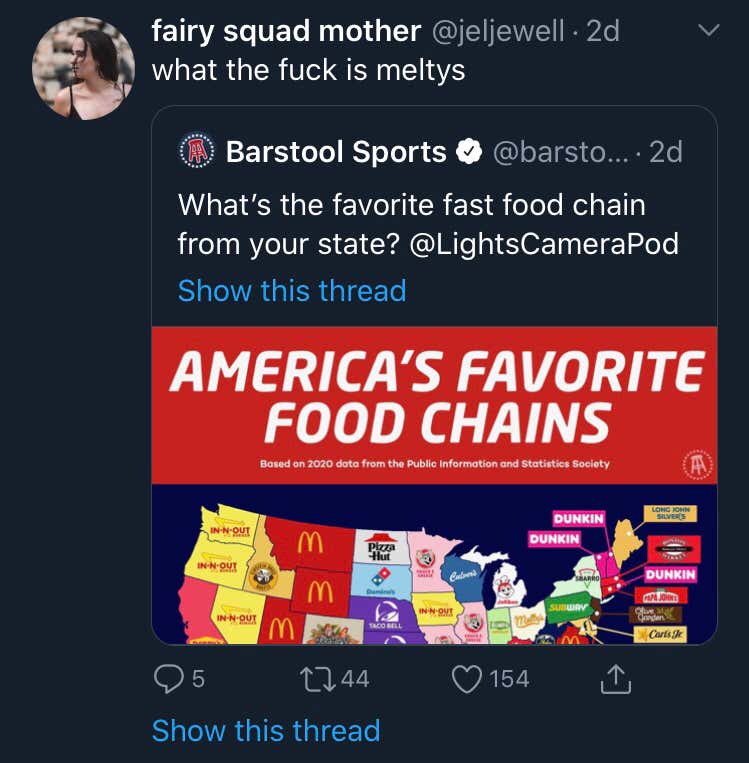 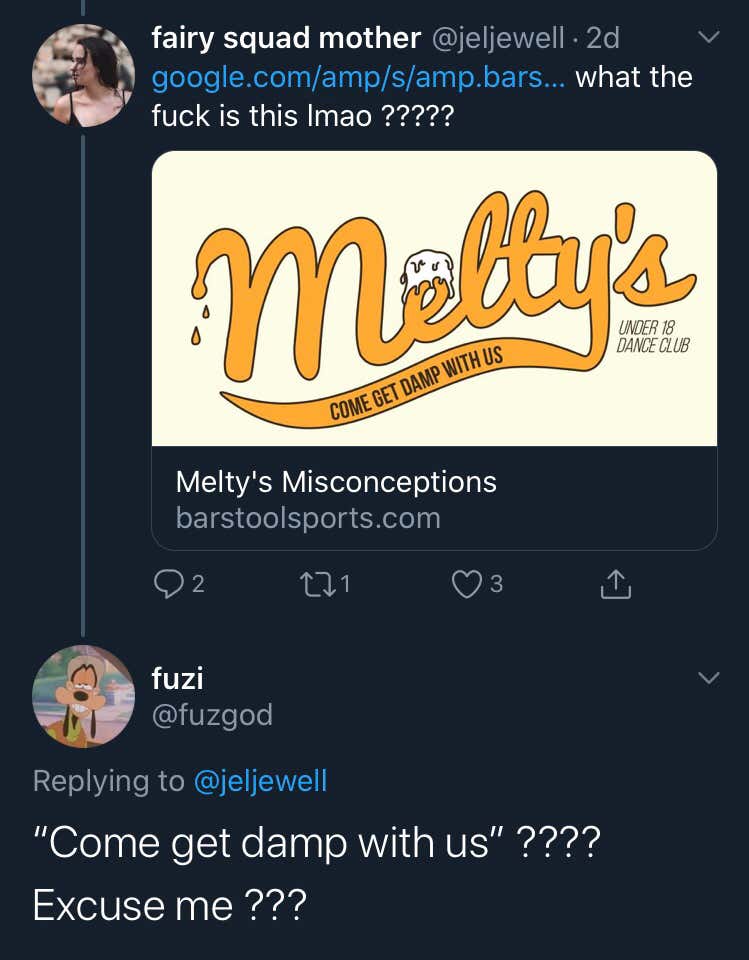 Call me old fashioned, but I’d say “Come get damp with us” is the perfect slogan for one of the sweatiest and most inclusive teen dance clubs in the world. 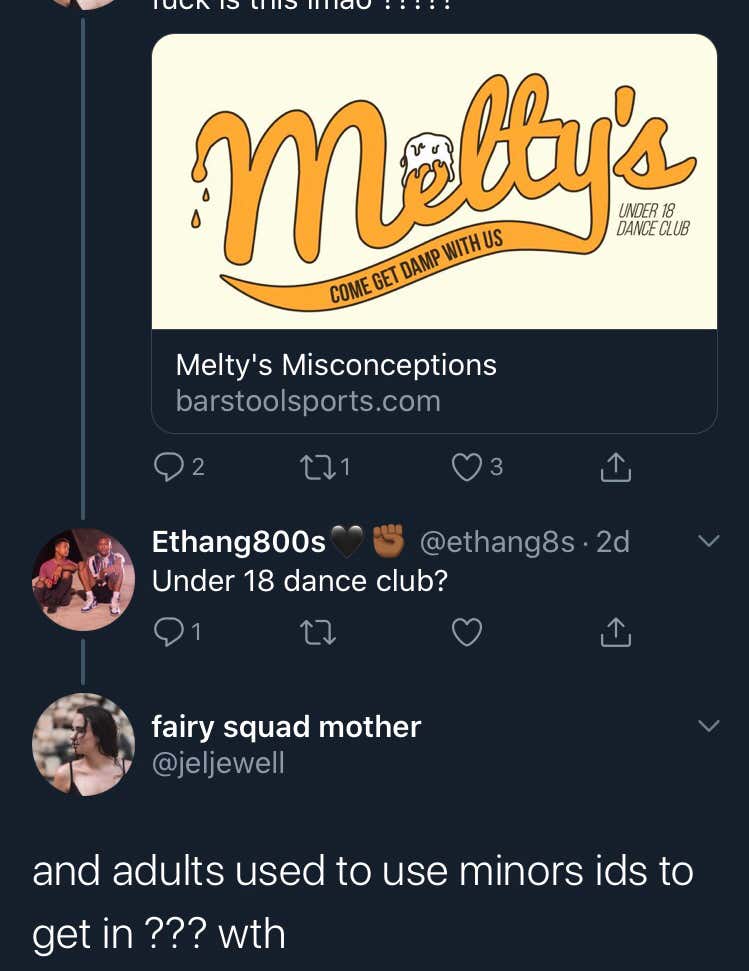 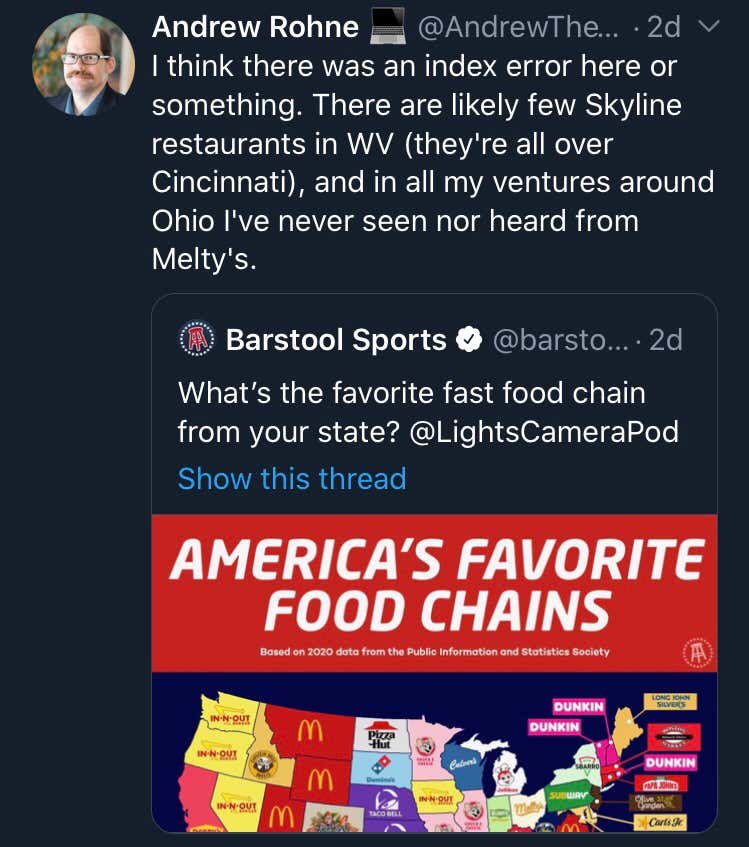 Not many things bring me joy, but I’ll be damned if I don’t derive it from visualizing a 55-year-old mustached man sitting at his computer in a three-piece suit and aggressively trying to research an underage dance club known for hot and sticky teens. 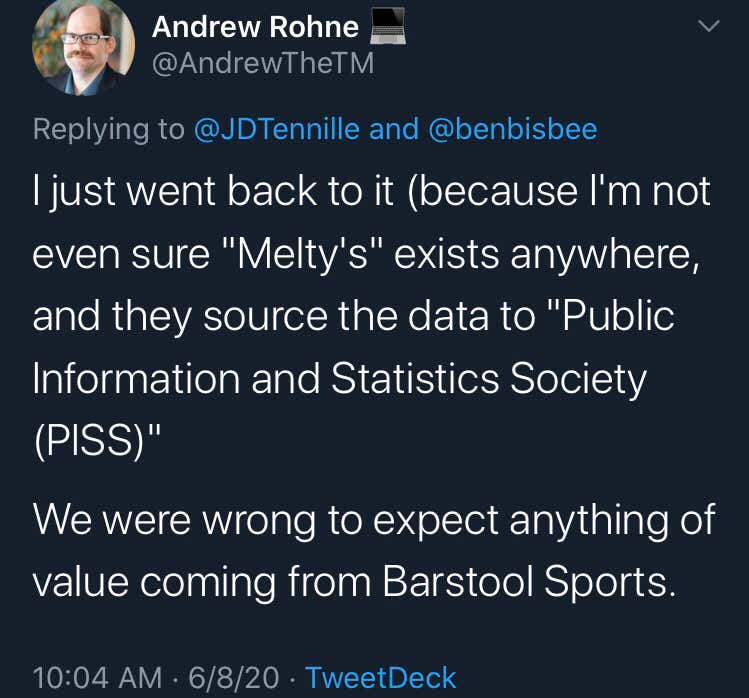 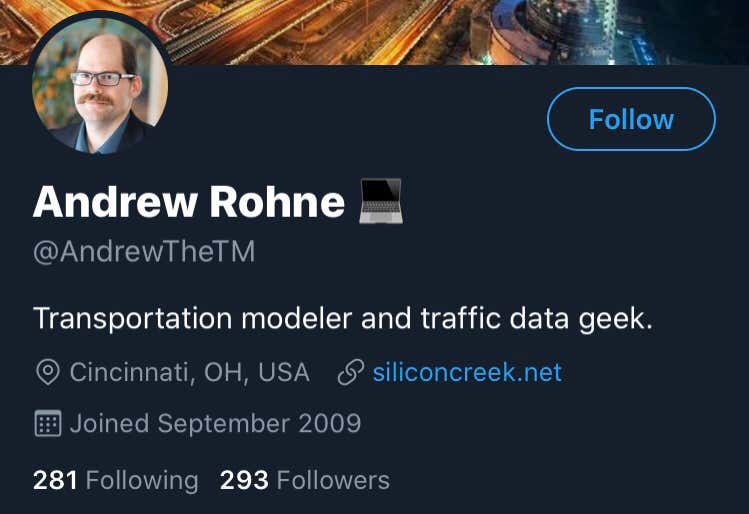 Let’s see what type of valuable articles his city’s Pulitzer-winning publication was churning out while those trash bags at Barstool Sports posted thinly-veiled satire. 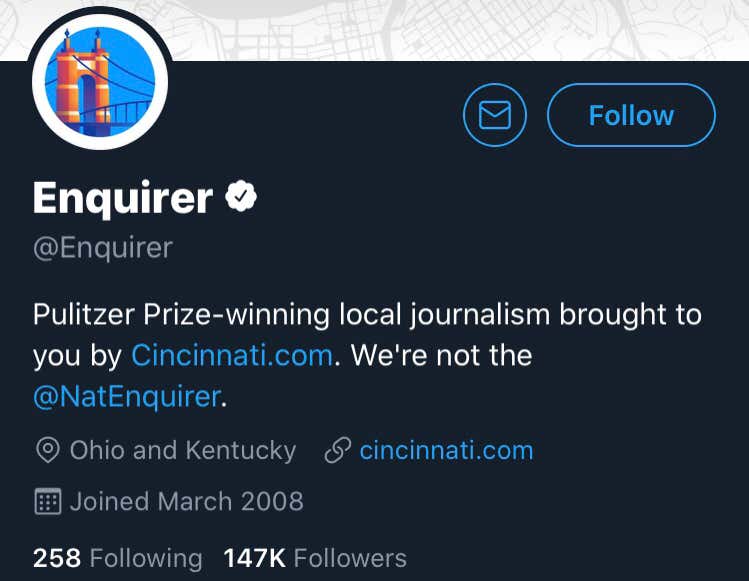 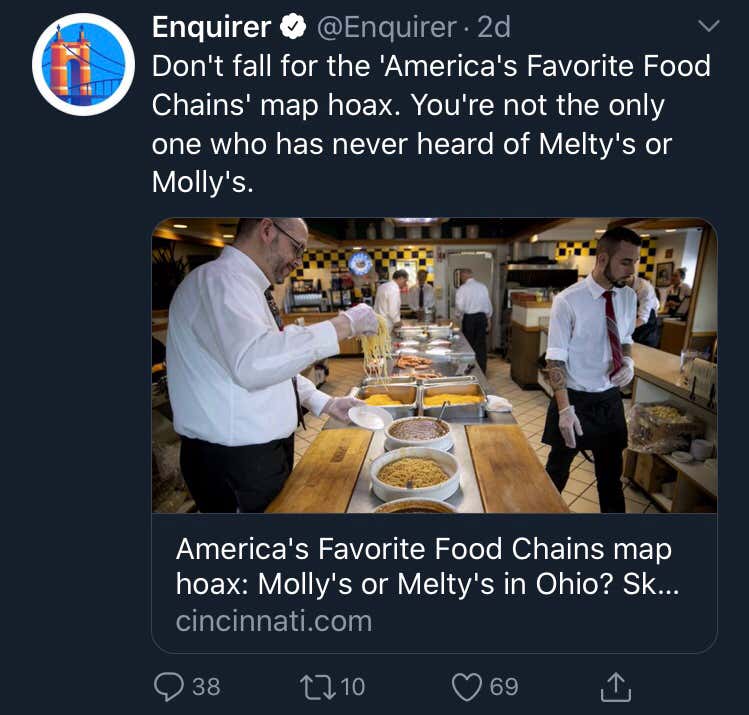 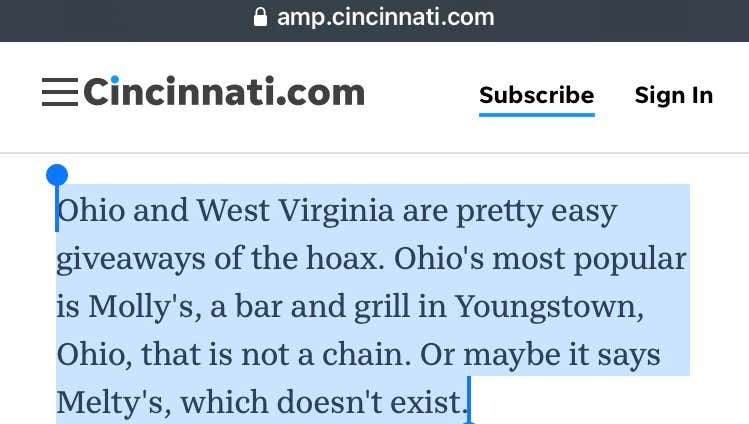