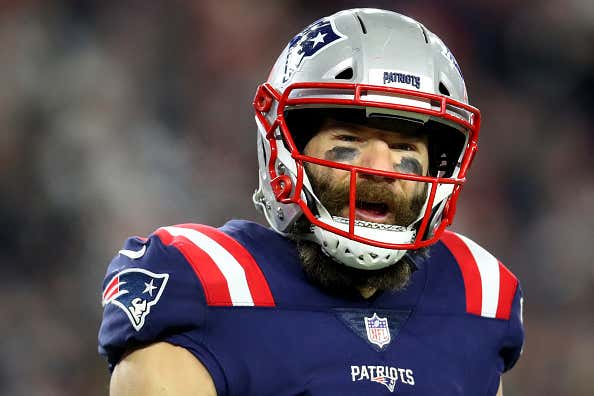 Motivational speakers, politicians and other such unnecessary douchebags love to quote an old JFK line about how the Chinese symbol for "crisis" is made up of the symbols for "danger" and "opportunity." It's total bullshit. About as accurate as the time he said "Ich bin ein Berliner," which was understood by the German people to mean, 'I am a jelly doughnut." (Which probably explains why it got such huge response, because jelly doughnuts have the power to make even as uptight a bunch as the Germans happy.) But even though the old trope is not literally accurate, the underlying point is. You can look at a crisis as something that will destroy you, or will give you a chance to prove your worth.

It looks like we know how Julian Edelman is looking at this post-Tom Brady crisis. And it's glorious.

There are two ways to handle it when your significant other walks out on you. You can spiral. Let yourself go. Wear pajamas like a second skin. Eat like a pig. Drink like a fish. Become more sofa than man. Wallow in misery and place all your self-worth into the relationship and decide you're nothing without that other person.

Or you can use the breakup as motivation. You can commit to bettering yourself. To reach your full potential. To self-actualize. To prove to the world, and more importantly yourself, that you are more than just one half of a relationship that had run its course. Instead of viewing your post-split life as a plank you must walk, see it as a spring board that will enable you to reach heights you never thought possible.

And I needed to know that Edelman is taking the latter and not the former as much as I've needed anything this offseason. It sounds like he's taking charge and setting the tone for the Patriots offense, if not the entire team. Using all the doubt as nitro-powered motivation to prove to everyone wrong. No excuses. Losing is unacceptable. He's taking over the leadership of his team. One red ass to rule them all, one red ass to bind them. And I couldn't be happier.

Remember when were all doing the "Will Brady or won't Brady" thing, even though he'd already made up his mind to leave? And while it was going on, Edelman posted this:

… and we all wondered how devastated he'd be after a break up? Or even whether he'd demand a trade so he could keep running routes for his life partner? Today we know he put down the boom box, shut off the Peter Gabriel and got down to work. He's Lloyd Dobler after he got over giving Diane Court his heart and getting a pen in return.

The rain on my car is a baptism. The new me. Ice Man. Power Lloyd. My assault on the world begins now. I believe in myself. I answer to no one.

This is exactly what New England needs to hear. Let's fucking go.