This week I was watching Kevin and Feits discuss what Feits called "the protest situation." He immediately corrected himself and understood how poorly that word choice came across. He then broke down how often we white people choose words that either seem diminishing or dismissive to something meaningful (like a nationwide protest designed to end many years of police brutality towards black men and women) or that appear inflammatory (like choosing to highlight empathy for "good cops" before you empathize with the innocent men and women being killed). Stereotypes get propagated, narratives get shaped, and for those watching closely, we send very clear signals about where we stand. We may not have consciously intended to do harm, but harm is done nonetheless.

The words we choose matter. A lot.

To illustrate how poor word choice can lead to trouble, it reminded me of my own word choice hiccup this time last year when I was covering the NBA Finals. The Warriors just lost Game 1 to the Raptors in Toronto and after the game Drake, the world's most annoying Raptor [sports] fan, decided to talk shit in Draymond Green's direction as he was leaving the court. As they barked back and forth, a crowd swirled around them. Heading into postgame pressers, it was the #1 thing trending on Twitter.

After the game, I went into the locker room for a couple of interviews and after I finished up, went to the press conference room to meet up with my producer and coordinate our postgame video. Draymond Green was still at the podium, just about to finish up, and according to him, no one yet had asked about Drake.

I got this text. 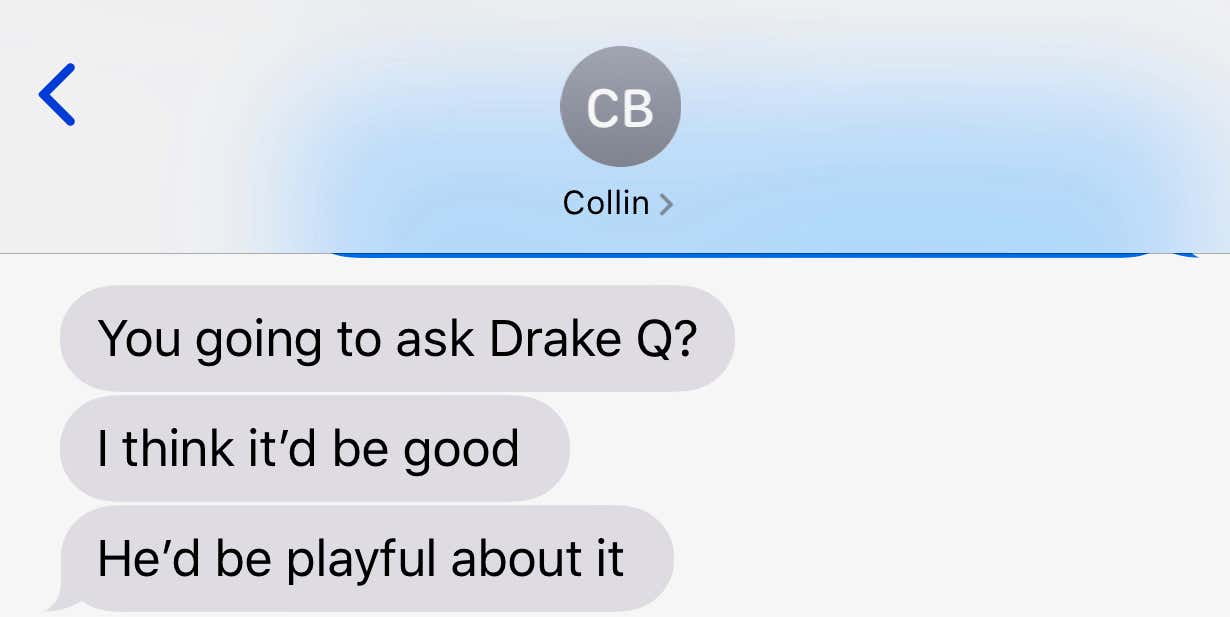 So I raised my hand, thinking that I would be in the back of the queue, and would have time to properly phrase my question.

And this is what came out of my mouth.

For those not interested in me being roasted by Draymond via video, the interaction went as follows:

Me: "Hey Draymond, just wanted you to talk a little bit about that post-game scuffle between you and Drake."

Now, as you might be able to tell, I fucked the question up.

It wasn't a scuffle. Kerfuffle. Verbal altercation. Confrontation. All would have worked (probably), but SCUFFLE? Nooooo that shit sent an inadvertent signal.

And it made news. The next morning, it was the talk of every sports morning show from First Take to Undisputed. I even made TMZ Sports. The long and short was that I got incinerated by Draymond and that "scuffle" was extremely problematic.

For the next couple of days, things were weird in Toronto. I remember when my colleague and I went to dinner one night at a popular spot in town, media members and athletes stared and pointed as they went past. We ended up chatting with a former player at the bar and when I mentioned we were in town covering the series, he explained that he knew very well who I was. "Scuffle girl."

Not exactly what one would hope to be noticed for.

But as much as it pains me to say, Stephen A was right. Using the word "scuffle" was terrible.

The dictionary's definition of a scuffle for those who need it: "To fight or struggle confusedly at close quarters."

You may be thinking, "what's the big deal? scuffle, kerfuffle the same difference." It's not though.

While I didn't mean anything by it, the word is racially loaded.

It's loaded because, in the past, white people and specifically white women have exaggerated, dramatized, and sometimes flat out lied about the actions of black men. The trope about Karen, who sees two black men standing together outside, or bird watching in Central Park, or having a BBQ, and decides to call the police because she deems that behavior suspicious or even worse that she makes up that he/they are "threatening her life" and to "send help" isn't just wild behavior that shows ignorance, it is so so much more.

These exaggerations and lies throughout history have led to countless men of color to be brutally beaten and even publicly executed. Large crowds gathered around to watch innocent black men killed on display. Contrary to what most people think, lynchings weren't always hangings. Some were burned alive, shot repeatedly (sometimes many times), forced to jump off of a bridge, dragged behind cars, and sometimes tortured and maimed, with their body parts sold in souvenir shops. These lynchings were celebrated and professionally photographed to be used as pictures for postcards. Sometimes even parts of the body were sold as souvenirs.

You may think I'm exaggerating, but I assure you I am not.

And given that it is clear that police continue to kill innocent and unarmed men and women to this day, (as Deontay Wilder so poignantly stated) when a white woman mischaracterizes two black men jawing back and forth as a "scuffle", it can be seen as particularly hurtful and triggering.

My point in bringing this up, and I do have a point and am aware of how easy it is to be perceived as making something much larger about myself, is there is a lesson here for all of us. For one, I almost never use the word scuffle any more in private or public because it's just such a loaded word. The example of "scuffle" in many dictionaries is "scuffle with police," which makes it even worse than I thought, even after understanding how problematic a word like this can be.

Words matter and matter even more when you are in the public eye with a platform.

Looking back, I think it was a lazy, quick decision, and I paid the consequences. As a result, I am conscious of what not only I mean, but that I need to be more mindful of how other people (strangers) will interpret what I say and how someone might respond to my words. Because no matter how diverse my upbringing, I am just as naive about certain racial hot buttons as anyone else.

I apologized to Draymond and explained how I was just speaking off the cuff and wasn't thinking. He was graceful and forgiving even though he didn't need to be. But the lesson was learned.

Words are important, and for many, many reasons, it's important we choose the right ones.