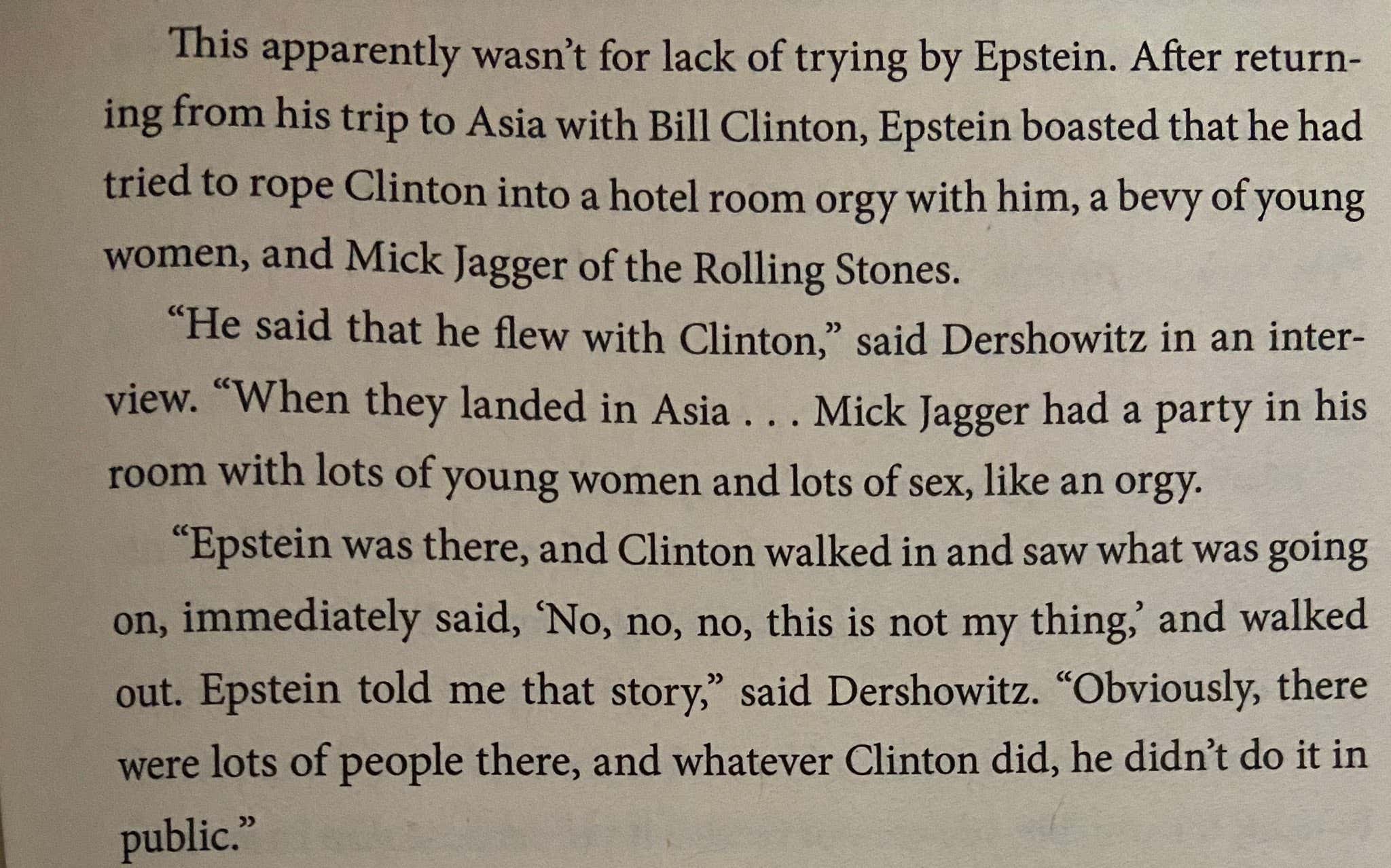 The late paedophile alleged that the incident happened in 2002 while he was ferrying the former US President around Asia on his private jet known as the ‘Lolita Express’.

Lawyer Alan Dershowitz claimed Epstein, one of his former clients, was present when the Rolling Stones frontman ‘had a party in his room with lots of young women and lots of sex’.

Mr Clinton allegedly walked in, but said, ‘No, no, no, this is not my thing’, before leaving.

The extraordinary anecdote appears in a new book called A Convenient Death: The Mysterious Demise of Jeffrey Epstein’, out next week. ...

Mr Dershowitz is quoted as saying: ‘Epstein told me that story. Obviously there were lots of people there and whatever Clinton did, he didn’t do it in public.’

Ordinarily I'd dismiss this as just the sort of material publishers want authors to include in order to make a book marketable. Unless you're JK Rowling, they prefer a little sex and celebrity gossip in there to generate buzz and, of course, sales. For all I know the authors, Daniel Hapler and Alana Goodman could be the Woodward and Bernstein of nobody's generation. But I'm totally buying this because they've got Alan Dershowitz talking about it on the record. You can't put quotes in a man's mouth without risking a lawsuit from one of the best legal minds in the country. And if you can't trust the words of one of OJ Simpson's defense team, who can you trust?

I have to say though, I didn't think either Jeffrey Epstein or Bill Clinton had it in them. First of all, as we speak Epstein is chained up in a sex dungeon in Pandemonium (the demon fortress in Milton's "Paradise Lost"), being molested by the denizens of Hell for all eternity. The fact that this monster was able to use his money and influence to do something other than sexually assault at-risk, underage girls is the one positive I've ever heard about him. Given is other despicable appetites, a hotel orgy with Mick Jagger and a bunch of consenting adult women sounds like a church picnic.

As far as Clinton, knowing what we know about him, who could've ever guessed he'd have noped out of a luxury hotel room filled with willing sex partners? The Vegas oddsmakers would have him as the odds-on favorite to be the first to show up and the last to leave. But reading what Dershowitz says, it sounds like he's the kind of guy who prefers to work in private. The sex equivalent of your friend who goes into the men's room stall to go No. 1 instead of hanging brain at the urinal with everyone else.

Still, this is a very good illustration of why famous men want to be famous. Here you have four different aging men from four very different walks of life: Rock god, President of the United States, predatory financier and Ivy League law professor. (Though it should be noted that Dershowitz says he was not at this one, he was still running in those circles.) None of them are especially attractive. And yet all of them get handed the opportunity to have casual, consequence-free, uncommitted sex with a hotel room full of willing ladies. I mean, the thought of these guys with their gross pasty, prune-like naked bodies getting serviced on a hotel sofa is a nauseatingly disgusting visual that will make you skip lunch. But you can understand the appeal for them. And it makes you hate Epstein even more - something I didn't think was possible - that he could've lived like this but instead chose to victimize teenagers. Have fun in Hell, asshole.