It seems as if everyone is a golfer nowadays. Which makes sense because there's no better time to be one than now. Golf might be one of the few sports that follows the 6 foot guidelines, allows you to get some fresh air, and clears your mind. Golfing is also one of the hardest sports in my opinion (will get to that later), but that doesn't stop some average Joes from being the next Tiger Woods. After seeing thousands of golf swings on the internet, I've narrowed it down to the best 7. Fasten your seatbelts as I present to you, "The Top 7 Best Golfers In The Country".

Eh, it's alright. Good contact, nice outfit, swing is a little generic though.

Ok, now we're cooking with fire! From the start of this swing, I could tell that boy was BENT! So I knew Trent had something up his sleeve. The transition from a swing to crouching on his knees is next level awareness. It's important to keep your body as crouched as possible so your upper back muscles don't cramp up for the next swing. Nice job, Trent!

I'm sold on Donnie's red pants. If you're not smoking a cig after launching a ball into mother nature's bush, then you're not playing the sport right. Joe Burrow smoked a cigar after winning a championship, so why can't Donnie let one rip here and there? 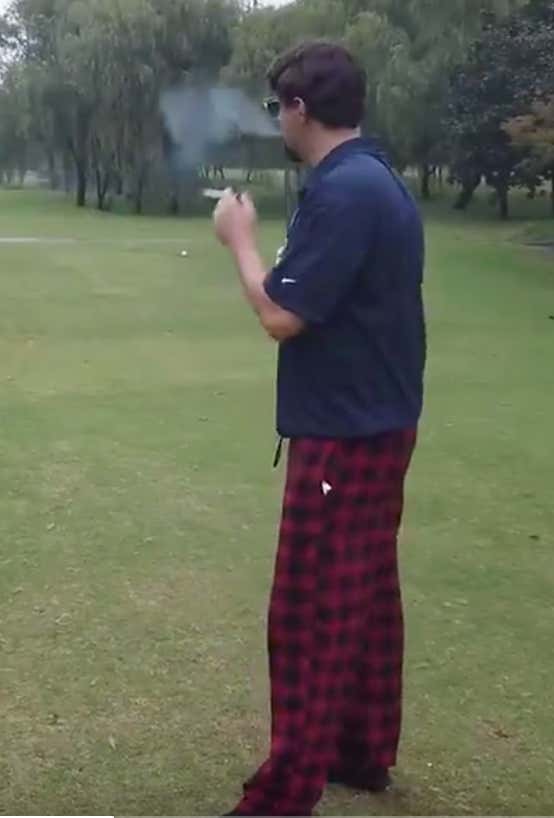 See ya later suckbag!! That shot had more arch than the McDonalds Golden Arches! Have you seen a man swing so good in sweats?? Not only is Mush a trend setter, but he's a club bender in my eyes.

I don't even care that it took me 6 tries to hit a ball. I will never forget when Barstool posted this video and the whole world thought they were making fun of an autistic kid. If it wasn't for my mental disability, that ball would've been heading to Mars on the first swing. I may not have the best swing in the company, but I sure do have the most impactful.

Everything about this swing is just about the perfect. The slow and steadiness of his swing, the American flag polo, and the way he bends his left knee are all the ingredients to the secret recipe of line driving that ball into a squirrels skull! For a guy who's been starting to get the jist of Golf in such a short period of time, I am amazed at how quickly Caleb has gotten to the swing of things. BA DUM TSS!

God forbid if I didn't include my former roommate and the hottest dude to work at Barstool Sports, Hot Sean, I would never hear the end from this kid. At first I thought he was shooting on a green screen with this blurry ass camera, but the sky is turning grey as Sean's swing is always a day of wreckoning for nature. Just like his body count, he tends to shoot around 60. Must be nice.

Don't worry, I didn't forget about Dave shooting 66 at Shineecock. But I think Dave forgot about the game of Golf because I haven't seen him swing in a long time. Probably because he's been busy the past 4 months putting the company on his back. Thank you for the job, Dave.

What?? You think golf is a men's only sport?? Of course not! I couldn't include the best golfers in America without shouting out Paige.

Is there anything Glenny Balls can't do?? The man can pound a burger, throw a knife into your nose 100 feet away in Call Of Duty, and this dude can laugh all the way to the bank after sending a ball into orbit. This is the greatest golf swing in the country and you can't tell me otherwise! This was a hard list, but I'm glad I used my experience of putt putt and Tiger Woods PGA Tour 2005 to fairly rate these athletes. Enjoy the weekend, and keep swinging.