For the 11 years I've been here I've spent a large chunk of that time being defensive about anyone who mentioned our "diversity." Or, more specifically, our lack of diversity. To me, the mere mention of it seemed like a direct attack that was nothing short of flat-out calling us racists. That I was a racist because I did not have more writers of color on the blog. It was, to use a fitting term, completely black and white: if you even hinted we were not diverse enough, you were saying we were racists.

Like most people in my position, for so long I felt like the fact that I wasn't personally racist was good enough. I'm so NOT racist that how dare anyone question me? I know my co-workers, I know Dave and Erika, I know how our company is run and how the people who run it think. None of it involves the color of someone's skin, all that matters is are you funny and can you do the job.

Not only that, but check out our blog. We relentlessly mock the assholes who are so flagrantly, blatantly racist. You know, the REAL racists. We hate them. The Stoolies hate them. Barstool and the Stoolies are regular, tolerant, 21st-century dudes who want to laugh and fuck around and not take things too seriously.

That was during the time I was blogging about things like college protests and all the classes on "microaggression" and things like that. Stuff I found ridiculous. Like everyone was such a big crybaby these days and just wanted to be a victim. First it was "safe spaces." Soon that was replaced by "privilege."

I couldn't stand that word. Just like with the diversity "accusations" against Barstool, it felt like another direct attack. Oh I have privilege just because I'm white? You don't know me or what I've been through. You don't know what anyone's been through. I worked my ass off for this job, nobody handed it to me. Ok, so no, there were no black people in my town growing up. But there were no Jews either — except me, who was half. So I was the town "Jew" and spent my whole life all the way through high school getting bullied for it. And you have the balls to tell me I'm "privileged"?

And yeah, sure, I'm a registered Republican. I think it's pretty obvious from what I've shared on my platform that my opinions are all over the political map. I've just been too lazy to change to Independent or whatever. Shouldn't I just be judged on my actions? How I and how everyone who works here makes fun of everyone equally, all colors and races and religions? We "don't see color." Shouldn't that be enough?

It wasn't until I read and edited Brandon's blog this week that I realized how it wasn't. Not even close. The term "eye-opener" is a cliche. But in this case, it was. It opened my eyes to all those race and diversity "accusations" that I took so personally. That I spent so many years being defensive and fighting back against. How I had been looking at it in the complete wrong way.

Brandon on the blog. Tyler and Willie on Token CEO and radio and Twitter. Liz sharing the DMs she receives on a daily basis. New guy Josh, who in his first week full-time, felt so strongly he publicly fired back at our boss for comments he felt were ignorant. These aren't theoretical people on our Twitter feeds. They're people we work next to and go to Happy Hours with. And they have perspectives and experiences and truths that are so different from what we've grown so used to in our Barstool bubble.

There have been a million quotes and video clips on social media that have jumped out at me. One that resonated more than most was Tyler's spot on Token CEO. It put words to exactly how I have approached situations like this, when I see a video like George Floyd: I shut down. I don't want to feel angry and uncomfortable, so I block it out and choose not to. And that itself is a privilege. Tyler doesn't have that option. People of color don't get to shut down when they are uncomfortable. They live it, every day, over and over again. 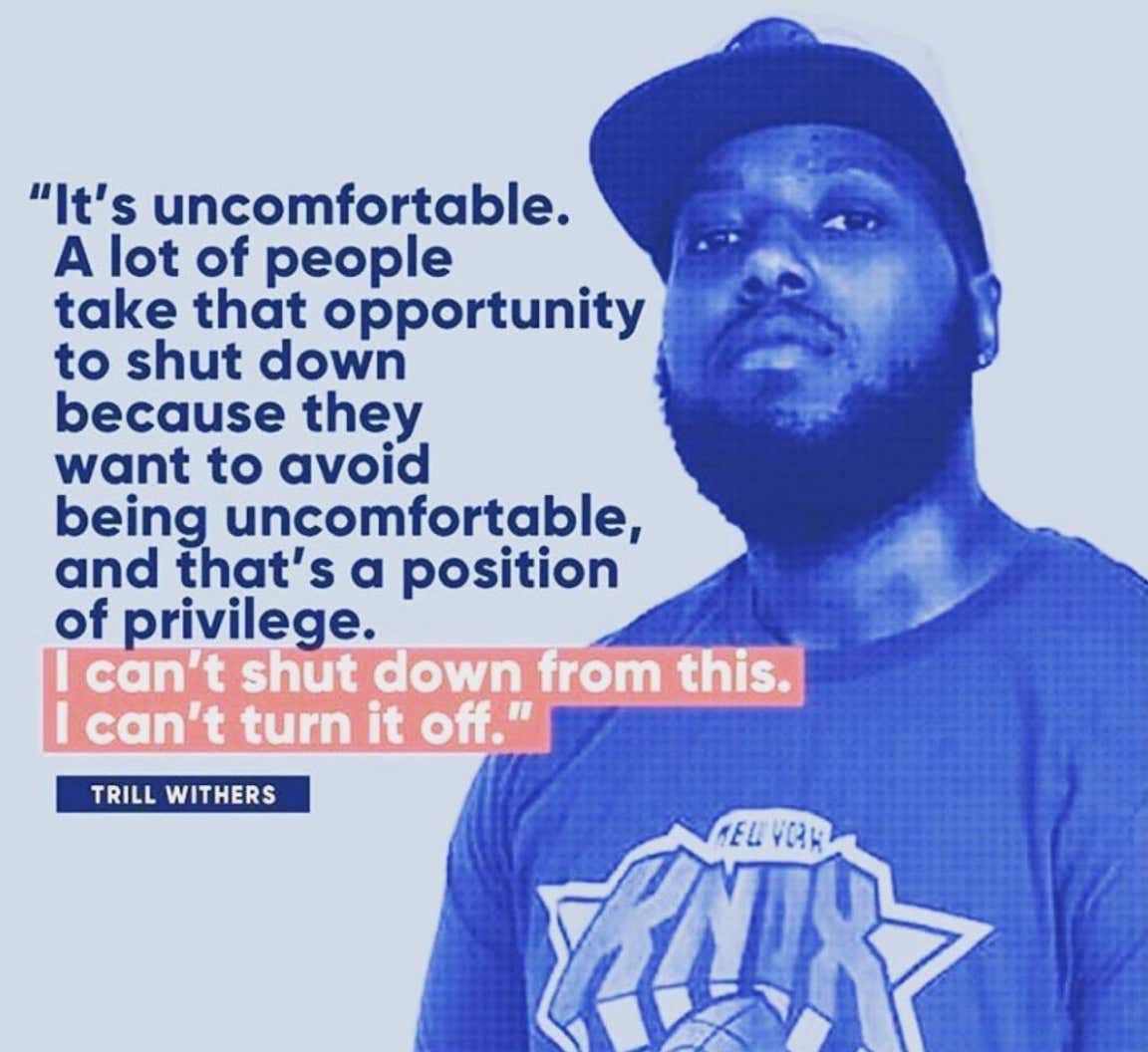 We have always needed to have more of a conversation. Something more than thoughts and prayers and hashtags. But "shutting down" has always been much more comfortable. I'm as guilty of that as anyone. I've had my own mental health to worry about, especially during this virus. Why would I add more anxiety and anger and stress to my plate for something that didn't affect me? Can't I post whatever the Instagram trend is and text a handful of my black friends then go back to my bubble?

It's selfish. But it's self-preservation. Which we all have hard-wired into us. It's too hard to have conversations like that, especially today. When everything is not just political, but rabidly so. When there are so many people waiting to rip you to shreds over it. I know how many "libtard at Libstool" comments I'll get just for posting THIS. For saying I liked Brandon's blog and saying I admire my co-workers. The people posting actual opinions, strong stances calling people out and demanding change? I can clearly see why so many good, well-meaning people have avoided this conversation for so long.

I'm grateful we have someone like Brandon to write that blog and finally force us to have it.