So this tweet hit the internet yesterday and I wanted to post a throwback of my personal ice cream truck power rankings but never got the chance to because my quarantined kids got in the way. I saw Big T blogged his definitive list of ice cream truck treats, which is fine if it's his personal power rankings list. But I ate too many snacks and added too many inches to my waistline for Barstool to allow the D word to be thrown around all willy nilly on this here website considering he didn't include even mention either of my personal Top 2 (Number 1 is likely because Big T was either Little T or Sperm T when they were actually available for purchase). 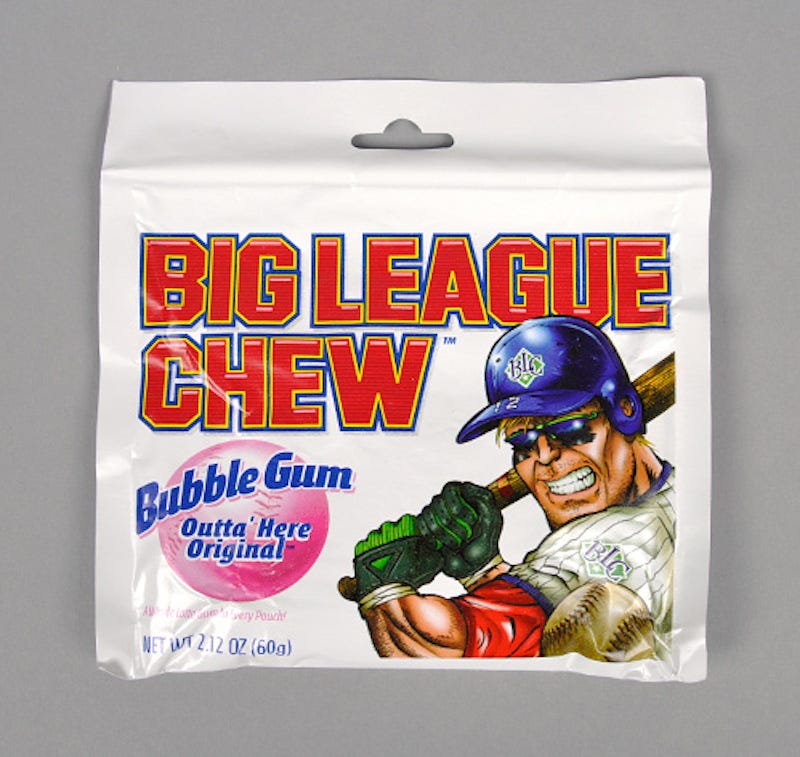 When I think of the ice cream truck, I am usually thinking summer or little league games as a kid. And if you are thinking about little league, you are thinking of packing a massive lipper like Matt Harvey with some Big League Chew. And if we are picking a specific flavor, it's Ground Ball Grape every single time.

2020 Update: Reading the name Matt Harvey makes me so sad since all the shenanigans and injuries that ended his career are going to overshadow this legendary moment that should have defined his equally legendary career: 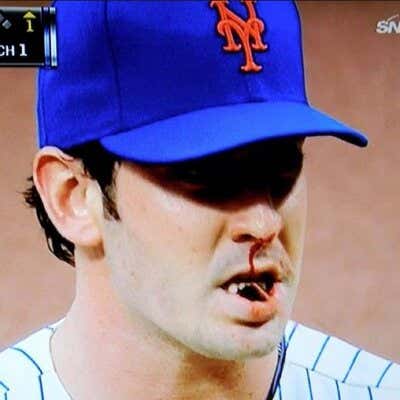 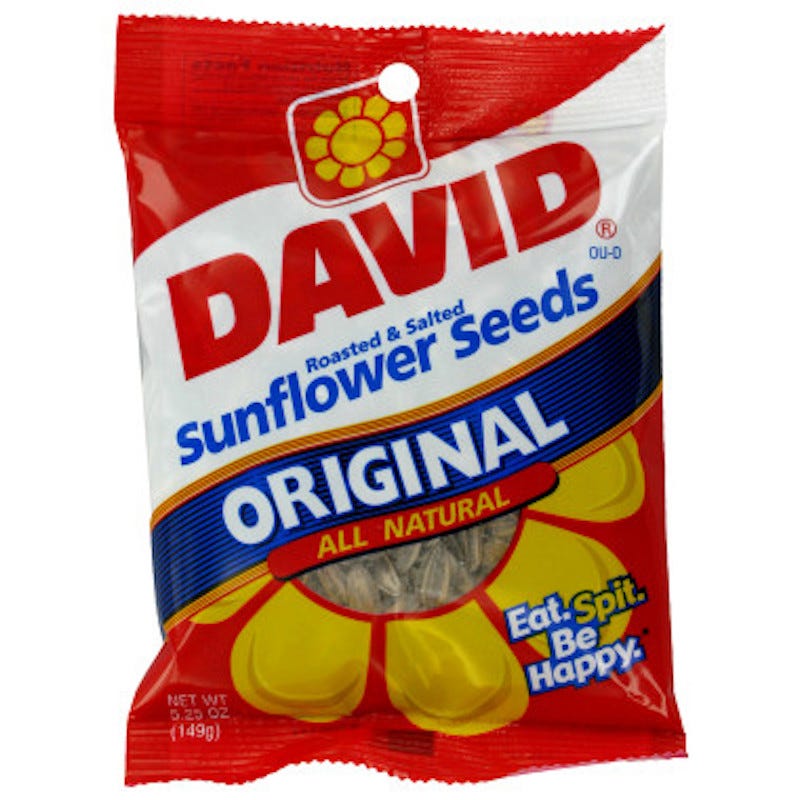 Like I mentioned on this week's KFC Radio, I love sunflower seeds. I used to get the giant Costco buckets of them for the summer and just plow through them while playing wiffle ball. As I have gotten older, I admit that I am starting to get washed up. I do love for the low salt version if possible because my mouth burns like Jimmy Douggan's dick once did. I feel like David's has tricked us by selling smaller seeds in their regular bag so we have to buy jumbo to get a good seed and that is a goddamn shame.

Now lets move on to the frozen treats since they are essentially the product that signs the ice cream man's checks. 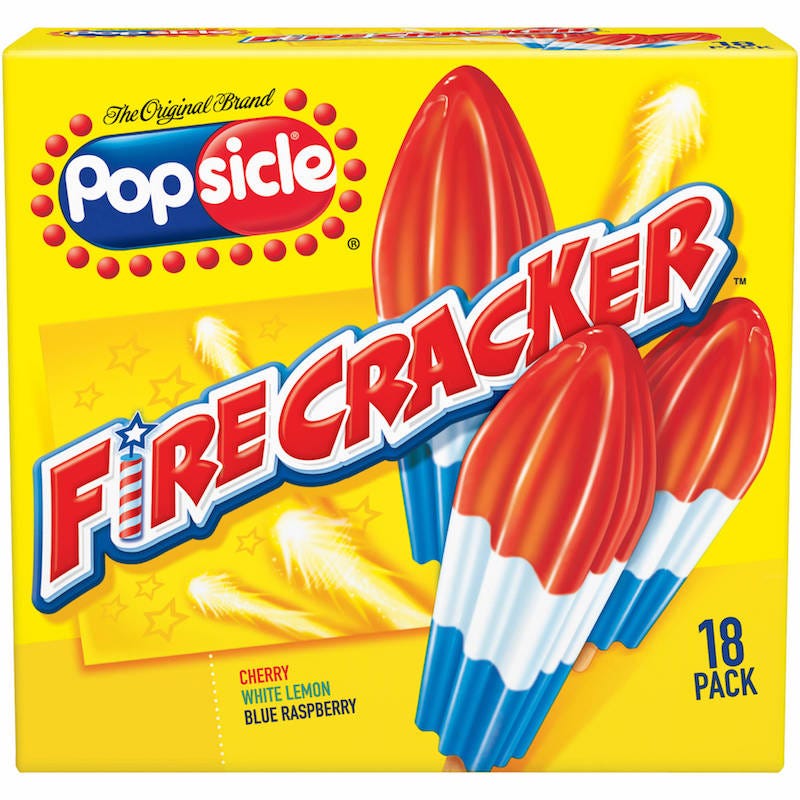 This is basically an honorable mention for me since I don't like Firecrackers. I'm not a huge blue raspberry guy and the lemon isn't great. But they are so American, I would be remiss to leave them off the list entirely.

Basically all the same, just changes on what you are in the mood for that day. I feel like back in the day, these Good Humor flavors ruled the roost. But time has pass all of them by as the ice cream industry had its revolution. But again, out of respect for America, I have included them on the list. 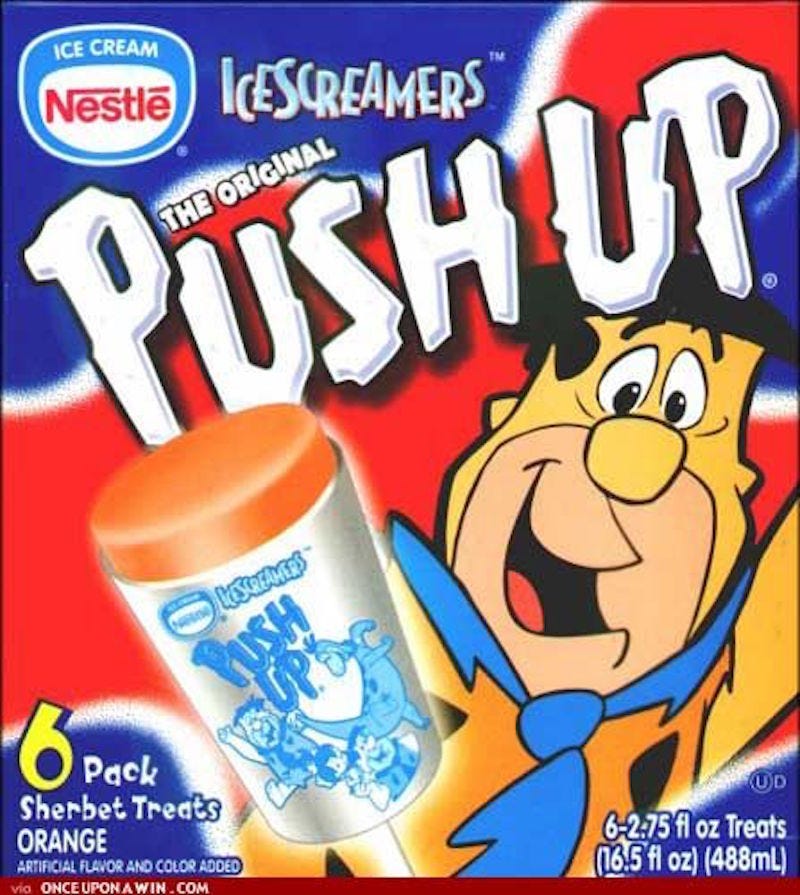 The Push Up Pop makes the list because it had such a unique consistency and made sherbert hot in the streets again. And I call it sherbert. Fuck that sherbet nonsense.

It also has to be said that the Flintstones need to be on the Push Up Pops to make them list worthy. Not sure why this is, but it just doesn't feel right without a Flintstone on that cardboard that you usually end up sucking on by the end. 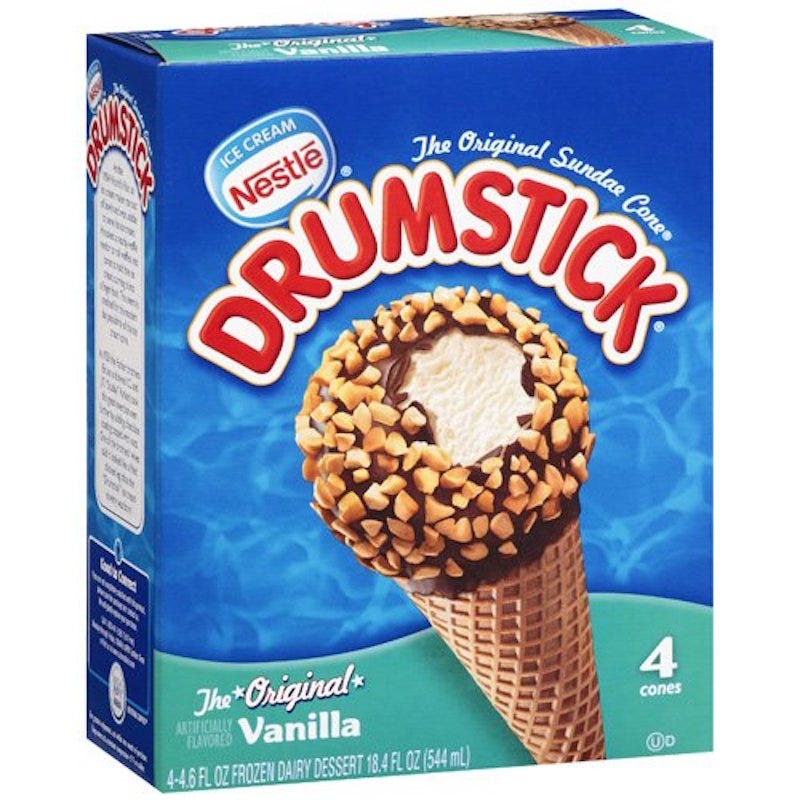 I don't think I need to do much to sing the Drumstick's praises. It is an icon in the game. But I will say that when you forget that the bottom of the drumstick has fudge inside, it gives you a feeling usually reserved when you are between the sheets with your lover.

Sorry, I just wanted to be gross and say the word lover. Such a creep word. 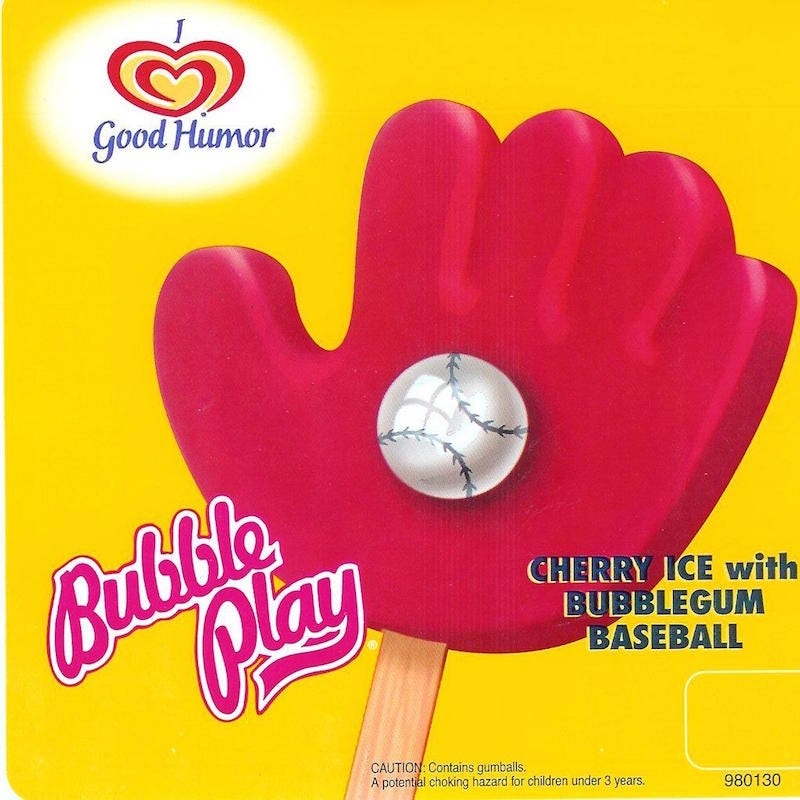 A classically underrated treat. Really good cherry flavor and the baseball gum had seams, which was appreciated. However, Bubble Play loses points because the gum would lose its flavor in 5 seconds flat and the gumball may have shattered your teeth if you bit into it while it still was frozen solid. If you weren't taught how to eat a Bubble Play the right way the first time you had one, you were probably going to the dentist later that day for emergency surgery.

And please don't chirp me about Sonic The Hedgehog, the Ninja Turtles, or Spongebob versions of this. Bubble Play owns the bubble gum + ice cream corner because I'm American. 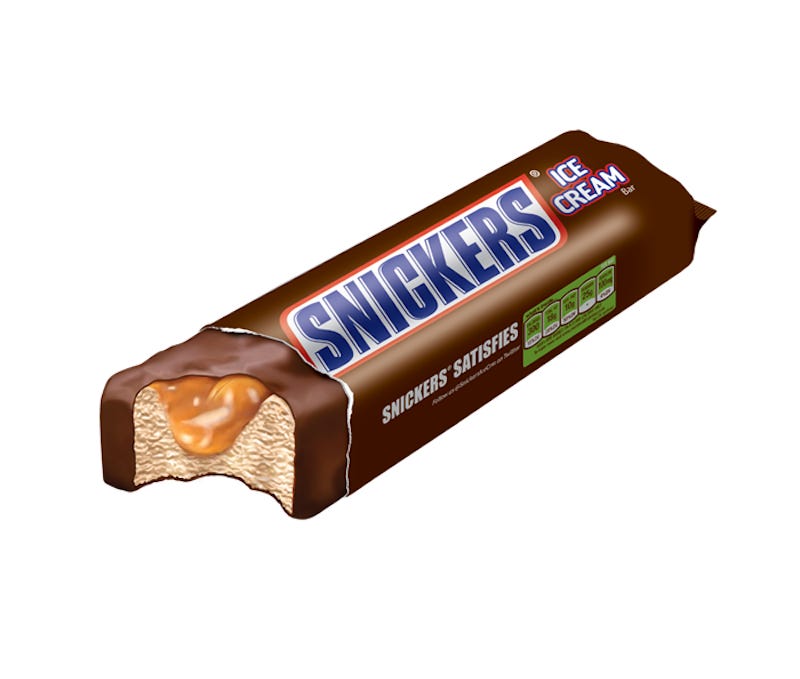 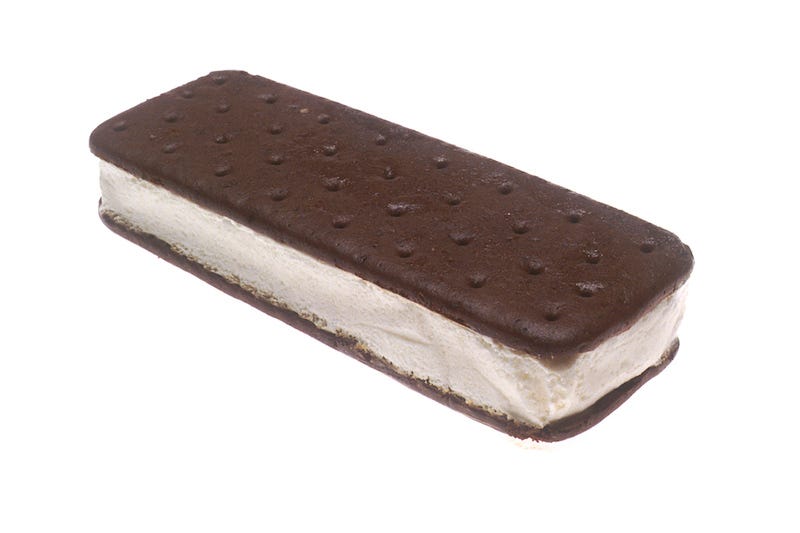 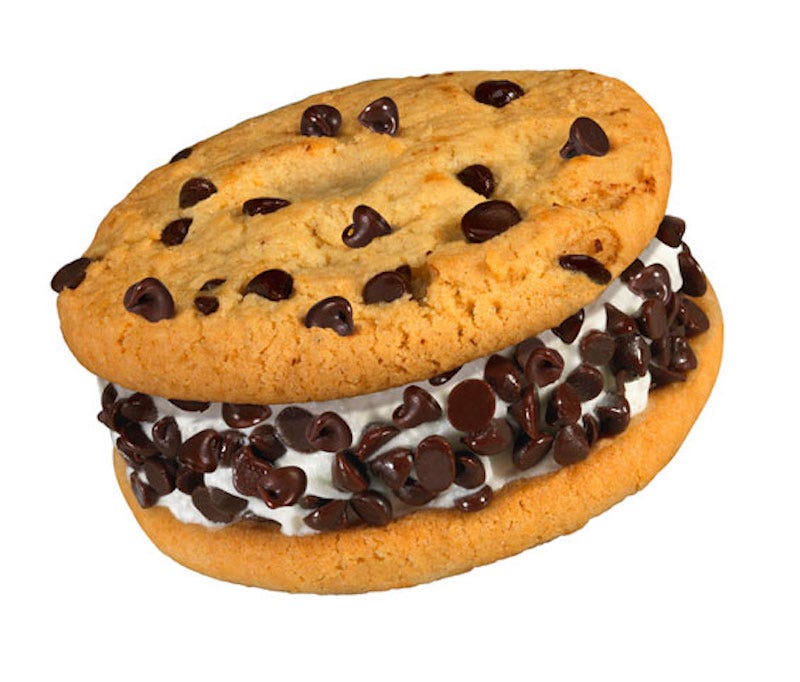 I think the Choco Taco is the best ice cream treat in the game. A+ name. A+ game. Everything you want in an ice cream treat. It would be number 1 with a bullet if not for nostalgia and such a unique blend of ingredients. But just know that I have NOTHING but love for the Choco Taco in my heart, even if it is rated 2. It is the 2012 Mike Trout of this list. 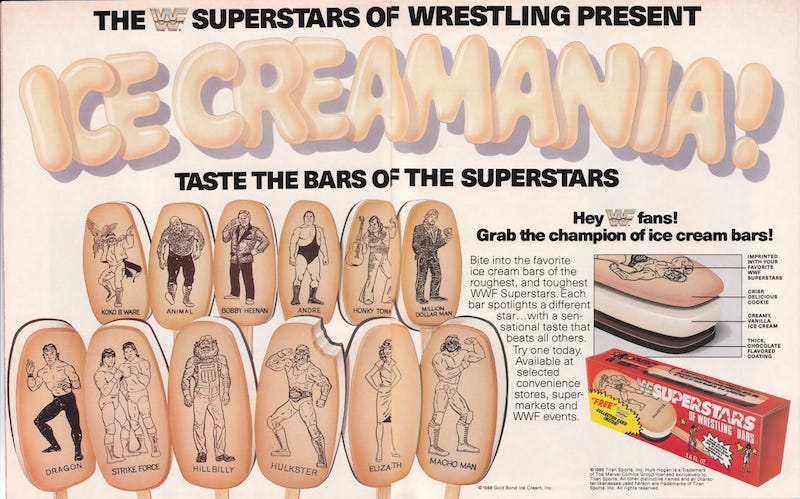 And here is our 2012 Miguel Cabrera (even though I still think Mike Trout should have been the MVP that season). The WWF Ice Cream bars were sooooo fucking good and sooooo fucking awesome just because they had the wrestlers on the pops back in the 90s. How did they have the technology for that back then? The precision of those graphics printed on a soft cookie is is the clearest proof for me that aliens exist and their technology is used in today's society. And lets not forgot that you got a free wrestling card with every bar. I'm pretty sure if you pull out one of those cards at any given moment, you instantly get laid. Actually that may not be true, but it should be. 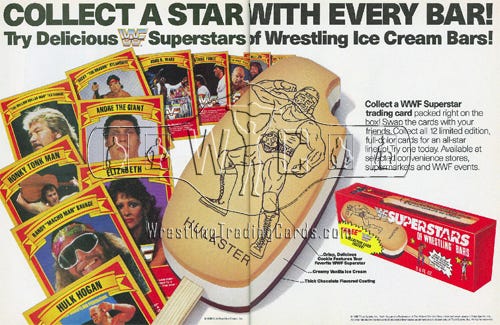 2020 Update: WWE actually rereleased these bars as a remixed ice cream sandwich without the stick, chocolate, card, or same exact cookie. As a slave the to the snack game I had them and they aren't bad but they aren't the GOAT either.

I've gotten some chirps about Screwballs. I've never had a Screwball. I'll give them a chance this summer for #content. But I doubt they are going to crack that list full of greatness and American legends

Later In The Summer Of 2016 Update: I tried Screwballs and enjoyed the ice but the gum was basura: