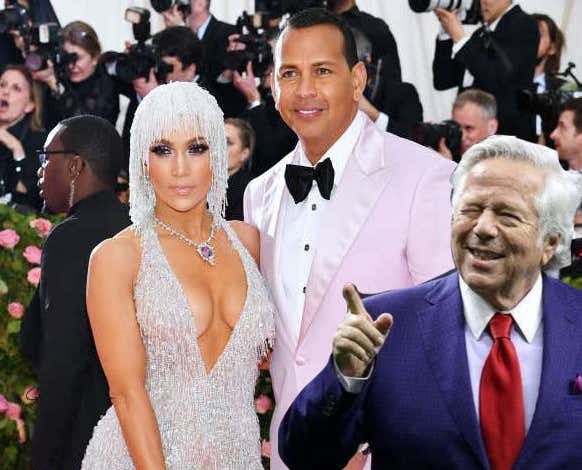 NY Post- J-Rod are re-circling the wagons on their dream of becoming the king and queen of Queens. Multiple sources close to the situation tell The Post that Alex Rodriguez and Jennifer Lopez are now working closely with very senior bankers at JPMorgan Chase on a new bid to buy the Mets after their initial approach failed to come together earlier this month.

According to insiders, the baseball legend and pop-star actress are putting in “hundreds of millions” of their own money to finally pry the Amazins’ free from the Wilpon family, who have become more eager than ever to unload the franchise thanks to COVID-19 making their precarious financial condition even more dire.

The bank’s super high-wealth banking unit gives clients access to JPMorgan’s investment bank and wealth management units. Sources tell The Post that Rodriguez and Lopez have been in daily contact with senior members of those teams as they work to find some super-wealthy investors to partner with Rodriguez and Lopez on a bid that one insider predicts will be in the neighborhood of “definitely less than $2 billion.”

Two clients whom Rodriguez and Lopez have apparently been speaking to are Patriots owners Bob and Jonathan Kraft. Sources tell The Post that the Krafts are not interested in buying a baseball team but are very intrigued by J-Rod’s plans for the Mets and Citi Field.

LETS COOK BABY! I realize that some Mets + Jets fans may be less than thrilled with the thought of A-Rod and the Kraft family taking over their team. But the enemy of our enemy is our friend and the purchasing group that finally rids the Wilpons from our lives are our saviors, no matter which teams they are/were involved with.

Now I'm personally skeptical of again getting invested in the dream of J-Rod making the Mets both literally and figuratively sexy while Robert Kraft lends his 2 cents on how to build a sports dynasty in the 21st century (along with a couple of bucks). However, I don't have anything else to root for right now outside of a Korean baseball team, a German soccer team, and hoping a bunch of dickhead billionaires aren't tone deaf enough to cuncel a baseball saeson during a worldwide pandemic where millions upon millions of Americans have lost their job.

On top that, the plans A-Rod and JLo apparently have for Citi Field that may loop in the Krafts makes perfect sense because every Mets fan with a brain has been saying this for years.

In terms of Citi Field itself, the early plans include adding some seats closer to the field. J-Rod would reportedly also want to create a field-level box area for celebrity Mets fans like Jerry Seinfeld, Chris Rock and Matthew Broderick in the mold of the Knicks’ “Celebrity Row.”

“With their connections, Willets could become a Wrigleyville in Queens,” one person with knowledge of J-Rod’s thinking said. The Krafts operated similarly around Gillette Stadium in Foxborough, Mass., building Patriot Place, an entertainment complex that contains shopping, entertainment venues, restaurants and a four-star hotel. Sources say they are intrigued by investing in something similar in Queens.

No offense to the chop shops that existed in Flushing for decades that apparently had their own ahem revenue streams. But building up a community with apartments, bars, and shit to do outside of a stadium with a successful big market baseball team will pretty much be a license to print money for the owners of the Mets and be a godsend for Mets fans who have been begging for something to do before/after their team rips their guts out in person. Loop in Big Cat as the VP of Spinzone and PR along with Davey Dave Trader as a very vocal silent partner with Mr. Kraft and the New York Mets just may end up on the moon before all is said and done.

All that being said, my first choice is and forever will be Uncle Stevie Cohen. But it's nice to dream of a world without the Wilpons as owners.