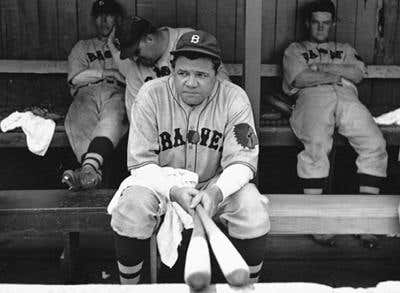 After one at-bat in the first game of a Memorial Day Doubleheader at the Baker Bowl against the Philadelphia Phillies, Babe Ruth playing with the Boston Braves, asks Bill McKechnie to take him out of the lineup. That groundout would be the final at-bat of Babe Ruth’s career as he retires after 21 seasons. Just five days earlier, Babe Ruth hit the last three home runs of his career, retiring with 714 dingers.

George Herman Ruth was born on February 6, 1895, in Baltimore, Maryland. Learning to play baseball in a boarding school. Making his debut a pitcher, Babe Ruth quickly established himself as one of the top lefthanded stars, as he helped the Boston Red Sox win three World Series in four years. He was also a strong hitter, and in 1919 he set the major league record of home runs in a season. The Red Sox would sell Babe Ruth to the New York Yankees in 1920.

With the New York Yankees, Babe Ruth became larger than life as he continued to set home run records, taking baseball out of the dead-ball era. The Yankees would get a grand new stadium due to Babe Ruth and became the premiere team in baseball. Ruth became one of the most famous men in the world and the face of sports and America in the 1920s.

Babe Ruth led Yankees to seven pennants and four World Championships, the first in the franchise’s history. He called his own shot in the 1932 World Series and hit the first home run in the first All-Star Game in 1933. However, by 1934 it was clear the end was near. At the age of 39, Babe Ruth hit 22 home runs the fewest since 1918, when he was still primarily a pitcher. He also hit .288, one of only two seasons as a full-time hitter that he did not hit .300. Babe Ruth had expressed interest in managing but was rebuffed by Yankees Owner Jacob Ruppert. After turning down a chance to manage the Yankees top farm club in Newark, Babe Ruth was given his release.

Babe Ruth had wanted to retire but was lured into playing one last season with the Boston Braves with the promise he would have his chance to manage from Braves’ owner Judge Emil Fuchs. The offer was a lie, as they wanted Babe Ruth just to sell tickets. Not having his heart in playing for a terrible Braves team, the Babe struggled. He had wanted to walk away after the first month but agreed to stay on until Memorial Day.

On May 25th, Babe Ruth had one last great moment. Toiling with a .153 average and just three home runs, Babe Ruth had three home runs in one game against the Pittsburgh Pirates at Forbes Field. One of the blasts was the first ball hit out of Forbes Field. Despite Babe Ruth’s exploits, the Pirates won 11-7. Those would be the final hits and home runs of Babe Ruth’s career. He would finish with 714 career home runs, a record that would stand for four decades. His .342 average is also ranked among the best in baseball history.

After retiring, it became clear that Babe Ruth would not get his chance to manage as the Braves had one of the worst seasons in National League history at 38-115.