Small businesses all over the country are doing what they can to survive during this pandemic. That includes breweries like Departed Soles in Jersey City. In order to create a little bit of a spark, make some noise, and have some fun they created the 'Trash Can Banger' IPA to troll the cheating Houston Astros. Brilliant. It's got the Astros orange, yellow, and red stripes as a throwback to their old jerseys. The IPA has 2,017 grams of hops per barrel as a nice little dig to the year they cheated their way to a World Series title in what may go down as the biggest scandal in baseball history. Remember they did that? Cool don't forget.

So this was clearly a fun little thing these guys had going on right? The IPAs are only available for pick up right now it looks like, but I've had a few of my friends take the drive and get some. I'll probably have to get over there this weekend.

Unfortunately in classic Astros fashion, their fans had to continue to be the absolute worst people in sports and took this too far. Their butt hurt fans are still salty for being branded cheaters and are leaving nasty reviews for Departed Soles which is something that could really fuck over their business. Looks like they're even trying to sue them. Lunatics. Put them all on an island to live out their remaining days away from the rest of the world. 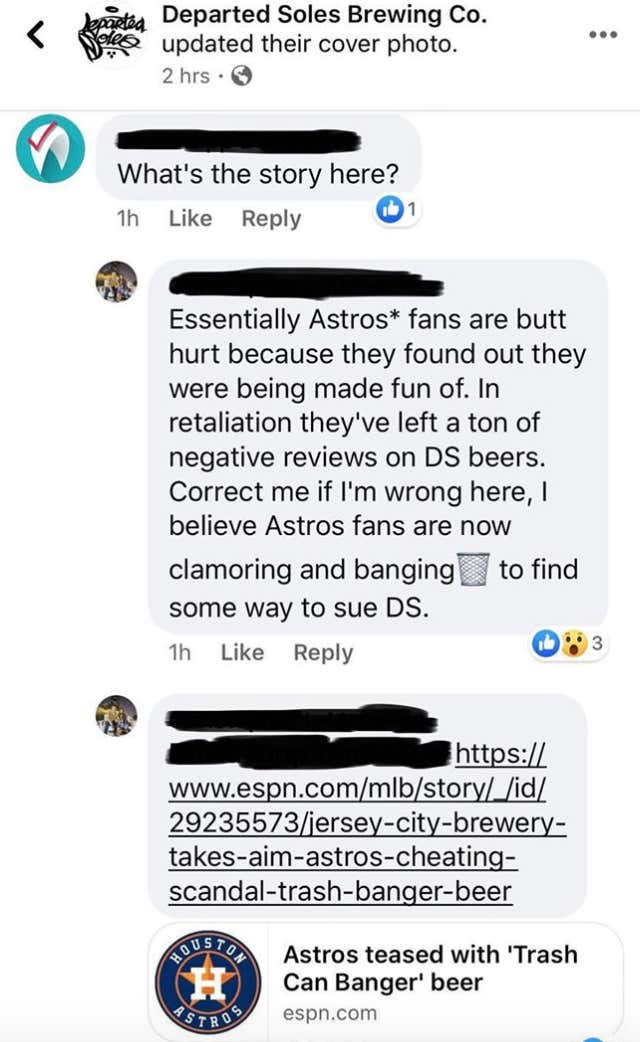 THREATEN TO KICK THE BREWERY DOG INTO THE RIVER??? Absolutely not. No one worse than Astros fans. No one. I hate every last one of them. If I were Rob Manfred and saw these actions by the fans I'd relegate the Astros to the minor leagues immediately and strip the title. We can't be threatening dogs. Fuck every last one of these people.

Shout out to Departed Soles Brewery for being creative and funny during all this shit. Hope you guys end up on your feet when we're back to normal. Looks like they're run by some pretty awesome people if you ask me.