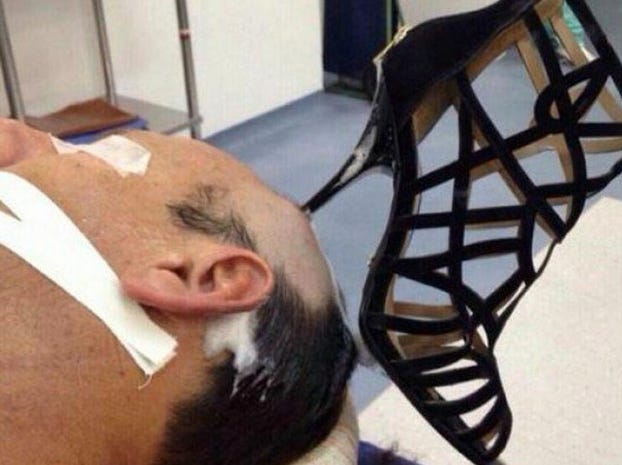 Tribune – SAUDI ARABIA: In a first of its kind medical case, a man in Saudi Arabia was admitted to a hospital with the stiletto of a heel lodged in his head . Local media reports said that the incident took place following a dispute between the man and his wife which led her to hit him in the head with the heel of her shoe. Upon his arrival at the hospital, doctors said they had never encountered such a case before.

On the other hand, the High Heel can be your mortal enemy. First it starts at the beginning of the night when your girlfriend is trying on 4 different pairs. “Do you like this one? Or this one?” 3 minutes later emerges from the closet “or this one?” I dont know babe! Wear whichever pair you arent going to be complaining about 30 seconds into our night after we’ve walked half a block. Like I said I appreciate the notion that high heels can work wonders for a girl’s look, but when your ankles are wobbling and you look like a baby deer trying to walk on ice that sexiness kind of disappears. Sex appeal completely out the window when you’re drunk and barefoot complaining that your feet hurt.

And do you know what absolutely murders the sex appeal? When your chick gets mad at you and stabs your brain with her shoe. That is the biggest buzzkill boner poison. Here I am thinking about you leaving your heels on in the bedroom and next thing I know I’ve got a stiletto through the cerebellum. Thats actually probably how he ended up in this situation? Told his wife they were going home to the bedroom to do butt stuff with her heels on and next thing you know, high heel to the dome. My new answer next time my chick asks me which shows I like is “Whichever ones you wont stab me with.” “Whichever ones can’t penetrate the human skull.” Chicks and their shoes man. Just crazy.