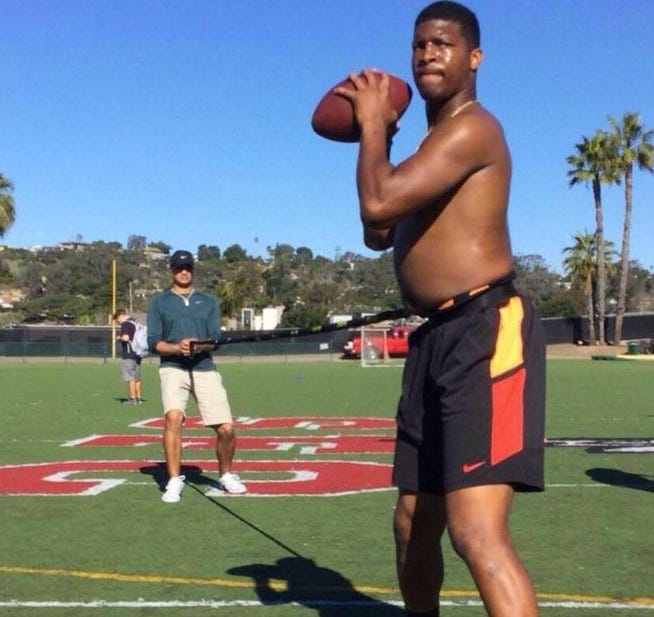 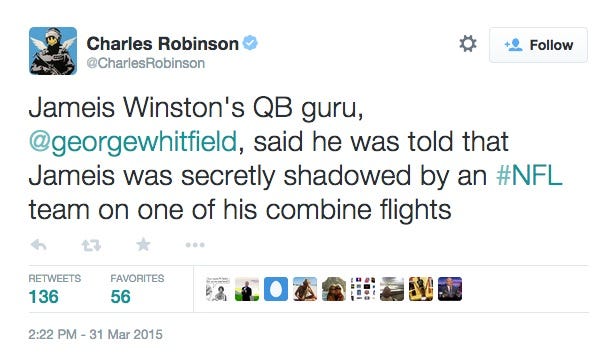 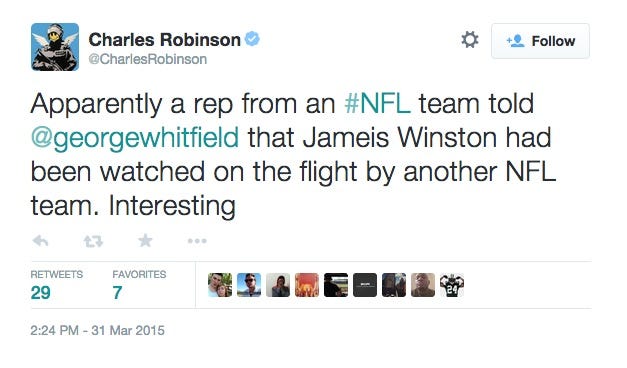 TALLAHASSEE, Fla. – Florida State’s pro day was supposed to be one of the final boxes for NFL teams to check off in their ongoing assessment of quarterback Jameis Winston. And now we’re starting to find out exactly how deep that evaluation has gone. Shadowing Winston – in essence, spying on him – apparently has fit into at least one team’s equation.

That revelation comes from Winston’s quarterback guru, the highly respected George Whitfield Jr., who ran Winston’s passing performance during Tuesday’s pro day. According to Whitfield, teams have been very aggressive in their vetting process, including watching Winston when he’s least likely to be looking.

“They’ve staged people,” Whitfield said. “Yeah, there are teams that have staged people on different flights he had, just to kind of be in the midst – a fly on the wall. No [Jameis wasn’t aware of it], but I had a team official tell me that. They were aware of another team that said they wanted to do that.”

How could a team know Winston’s flight plan?

“When you go to the [NFL scouting] combine, the league has a flight deal, a flight manifest,” Whitfield said.

Kind of crazy/funny when you think about it – some hardened, street tough P.I. tailing a college kid around, spying on him on cross country flights after he threw footballs and ran some sprints in nothing but some tiny spandex. Picturing like 1000 movies right now of cop stakeouts, except instead of some massive drug or human trafficking ring leader, it’s the goofy Florida State kid who stole king crab legs and yelled a viral Youtube phrase.

But at the same time, it makes perfect sense. An NFL team is about to make a HUGE investment on Jameis. An investment that, if we’re being honest, is going to be very risky considering his documented past. So yeah, following him around and observing how he is when he has his guard down, when he doesn’t think anyone is watching that closely, you can learn a lot about a person like that. Anyone can say the right things and act polite in a professional team meeting that’s going to decide his future.

PS – Airport/airplane are definitely the most unfair places to do this though if we’re being honest. Personally I’m my worst self when traveling. Like you’re really going to judge Jameis on getting pissed at the foreign dude in front of him on the security line who keeps trying to go through the scanner with a massive belt buckle and 15,000 coins in his pocket?