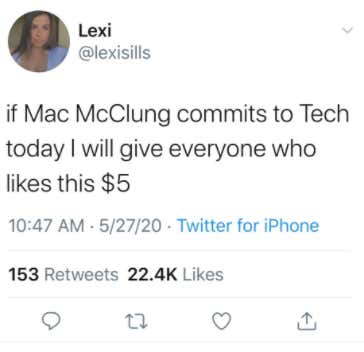 Alright so this tweet started blowing up last night as more and more people liked it. It didn't help that Mac McClung quote tweeted it too:

Alright so here's the thing that I really wanted to talk about. I respect the viral tweet game. As Riggs famously said, check the timestamps. She was ahead of the game. She tweeted it at 10:45 in the morning when it was very much up in the air where Mac was going. People still thought he was going to Wake to play for Steve Forbes, who heavily recruited him out of high school. She just put it out there.

Like every other time this happens it blows up and it doesn't matter. You get a bunch of followers, a bunch of like and RTs and interactions. There needs to be an executive order placed today that if you say something like this, you have to pay the amount owed at the time of the commitment. The moment Mac tweets out that he's transferring there, it's done. No more likes, you owe that amount of money. We need to start holding people accountable for things like this. Sound familiar?

The point is there needs to be consequences for going viral for this. You can't just delete Twitter. You can't just not pay anybody. Rules are rules. You say you're going to do something, you do it. Words matter! Either these tweets to stop going viral or they need to start paying at time of announcement.

Also what's the point of going viral if you're just going to delete Twitter?