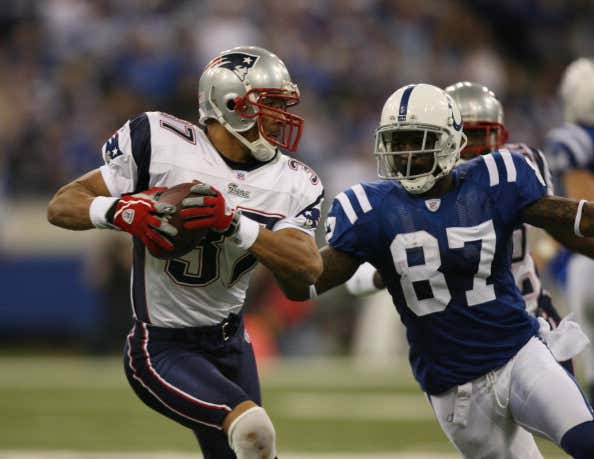 We don't do a lot of lists here at Barstool. There are exceptions, but as a general rule we prefer to leave those in the clickbait/slideshow hell of the internet along with "Why Hollywood won't cast [fill in formerly hot actress] any more," beauty secrets and quizzes that tell you which "How I Met Your Mother" character you are. But in the back of my head I've got a list called "Well known players you forgot were with the Patriots." Albert Haynesworth. Vinny Testaverde. Tim Tebow. Doug Flutie. John Lynch and so on. But it's more of a barroom discussion (if we ever get to have barroom discussions again) than a blog topic. And when I have it, the name Reggie Wayne might be the most obscure.

I've mentioned this before: Wayne is the pluperfect example of a guy who came to Foxboro, got a taste of the amount of work ethic, time, attention and commitment that is demanded, and noped his way out of town in short order. That was in 2015. After he spent 14 seasons in Indy. And he lasted days in Foxboro.

I bring it up because Wayne was just on NFL Network's Dan Hellie’s podcast and told the story:

"So I get out there, they had some other guys there working out, but I didn’t work out with those guys, so I already felt like, OK, this is some ball stuff right here. So I worked out by myself and Tom Brady is the one throwing me the passes. So I went out there and I had a pretty good workout. They ended up signing me third week into the preseason.”

Wayne said he told Belichick weeks later, before the roster cut to 53 players, that his heart wasn't into playing and it was time for him to retire.

The Patriots gave Wayne a $450,000 signing bonus as part of his contract, and let him keep the money despite his retirement. When Johnson retired a few months later with the Lions, the team came after a prorated portion of his signing bonus and forced him to repay $1.6 million.

If you're at all surprised that Belichick would turn down an offer of getting almost a half a million bucks in money and cap room back so that he could spend it on Reggie Wayne's replacement, I'm with you. But I suppose we shouldn't be.

Yes, Belichick the salary structure is the rock upon which his church is built. He inherited a cap mess when he got here that would've put Marie Kondo into therapy. Climbing out of it was an essential part of winning his first Super Bowl the following year. And he's tracked every dime like the accounting department at a casino ever since, as a hundred or so restructured contracts of his core veterans will attest.

Conceding all that, he still gets that these guys are human beings. Especially 14 year veterans who don't have the fire down below any more to pay the price and sacrifice for him in order to win. So I guess that 450 grand he's out is an investment toward the next respected veteran who wants to come in for the minimum and chase a ring. A Martellus Bennett or a Chris Long, say. In the long run, he's a manager of football players, not Scrooge bitching about how much coal Bob Cratchit is using in the office. Which I suppose is part of the reason why he continues to attract veterans and win, while the Lions shook down Wayne to pay them back and are 0-1 in conference championship games in the entire Super Bowl era.

So good for Belichick. And good for Wayne. Though I still think the best job he ever had was being the entertainment at Andy Dwyer's bachelor party.