This might be my favorite video of the last two months. No matter where you come down on the issue of Masks vs. No Mask, you have to appreciate the sweet, sweet hypocrisy of the reporter singling out the guy in the Davante Adams jersey for not wearing one. Then Packers Guy points out "Including the cameraman," and the reporter is just so caught off guard all he can do is repeat "There ya go. Including the cameraman," and take a deep, crestfallen sigh because he's been busted. Then jump cut to the anchor who puts on her deeply concerned Journo voice to add, "Striking images." It's perfect. Like a great sketch. The set up. The ironic twist. The punchline. The callback. All done with broad physical comedy and precision timing. You just can't teach that. It has to happen organically or not at all.

And it gets even better from Packers Guy's angle:

Half the guys in the camera crew hoping against hope no one who Cal busted would turn around and hit them on the dreaded re-bust. That the unmasked public would just accept their lecture silently, ignore the 275 pound teamsters standing out of camera range and walk away in shame. And you can just see the looks on their faces, thinking that maybe Packers Guy's iPhone's visual acuity is based on movement like a T-Rex's. And if they freeze long enough, it won't see them and just go away. It's priceless.

Remember a couple of months ago, in the early, early days of the shutdown, there was a part of all of us wondering if the social fabric would hold, or if it would tear apart like the second act of every "end of the world" movie, with people tearing each other apart for dwindling resources? I'm talking about those simple days when we were filling shopping carts with toilet paper and hand sanitizer and worrying that the whole system would collapse and we'd be smashing the windows at the bank and looting the CVS.

Obviously that never happened. The supply lines held. My local supermarket has paper products piled to the ceiling. The next riot we have will be the first.

But the pandemic has finally produced a battlefront: The Covid mask. This thing. 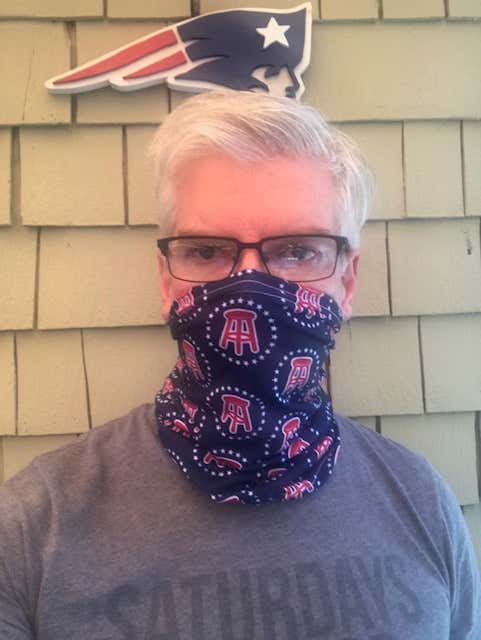 (Excuse the hair. The barber shops in Massachutopia are only now starting to open.)

Like the most boring apocalyptic video game ever designed, the civil war we are now waging against our fellow man is over the issue of whether you need to wear a mask outside. That's where the line is currently drawn. And as you'd figure, much of the war is being waged on TV. Take as another example, this report from Alabama, where a reporter went around the beach in Alabama, nagging an of the maskless who'd talk to him about their masklessness:

Until - and I'm sure you can see where this is going - inevitably he got bagged once his own cameras were off, but nobody else's were:

I was talking to my brother about this earlier, and we were talking about how you react to the shutdown is a window into your soul. Helpers are being revealed as helpers. Optimists are being optimistic. People prone to negativity are being exposed as negative. And I've realized that one of my favorite things in this life is ridiculing hypocrites. I'm starting to feel like it's what I was put on this Earth to do. It gives me joy. And for better or worse, the current state of affairs has given me a target rich environment. Until further notice, I'll be wearing my mask. But believe me when I say I'm smiling ear to ear underneath it.