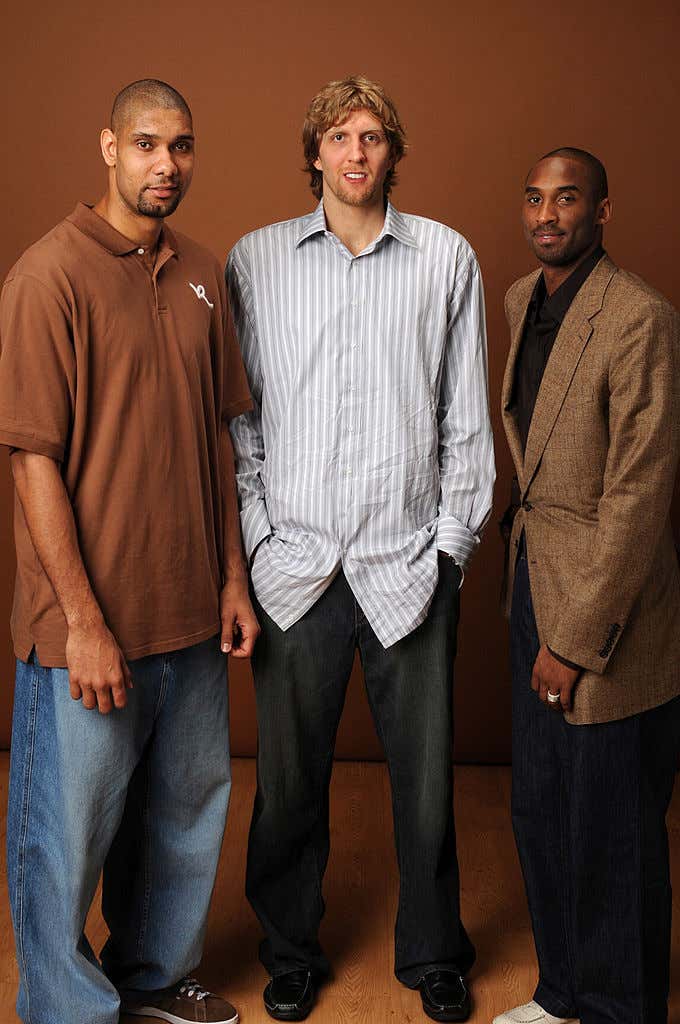 The thumbnail to this blog doesn't do the picture justice, you have to see the whole thing. When I saw that tweet come across my timeline I couldn't look away. It might be one of the greatest pictures in NBA history. If you showed someone this photo who just woke up from like a 30 year coma and had no idea who these people were or what has gone on in the NBA over that timeframe and you told them these were three of the coldest motherfuckers to ever play the sport, no chance they'd believe you.

I then became curious. I had to know when this photo was taken. You might think that given how they are dressed, especially Duncan, that this was just some weird late 90s picture. Nope! This is from the 2008 All Star game! That's not that long ago at all. Was that really how we looked just 12 years ago? Kobe may look the least outrageous, but I'm pretty sure he's wearing moccasins of some kind? What a power move. Duncan is his usual self and looks like pretty much like every teenager at that time. A way too big polo, even bigger jeans and some Vans (?). Close your eyes right now and you'll remember people from your own life who dressed like that. Maybe it's even you. Dirk is every business casual bro who is finally out of the cubes and hitting up happy hour with his buddies. Untucked massive button down with the classic baggy black jeans and black shoes, just a hilarious look from all three.

Don't forget, this is a group with 11 rings, 42 All NBA teams, 4 MVPs, 6 Finals MVPs and 3 HOF inductions. Some of the best the league has ever seen which is why this photo is so funny to me. I will say though, I do have some problems with what that tweet says. Most loyal? I dunno about that. Kobe basically tried to leave the Lakers for the Bulls multiple times and was always demanding trades, Tim Duncan would have been a member of the Magic if Doc Rivers allowed his fami to fly on the team plane. None of that ended up happening so they all spent their entire careers with one team, but it's not because they were super loyal and never considered leaving. Maybe that's the case with Dirk, but certainly not the other two.

Either way, I just wanted to brighten up your day with a photo that made me chuckle to myself in the blogging station. Now, as a thank you for the click, here's a little taste of what these three did on the hardwood