I am a man who, like many, experiences debilitating hangovers. I actually got such a bad hangover after a night out with the St. Louis BattleHawks during XFL training camp in Houston at my previous job, I haven’t really drank since. There’s something about vomiting between your legs while sitting on the toilet on day 20 of a work trip for a startup football league in a horrible hotel that just forces a man to change...for a little while. 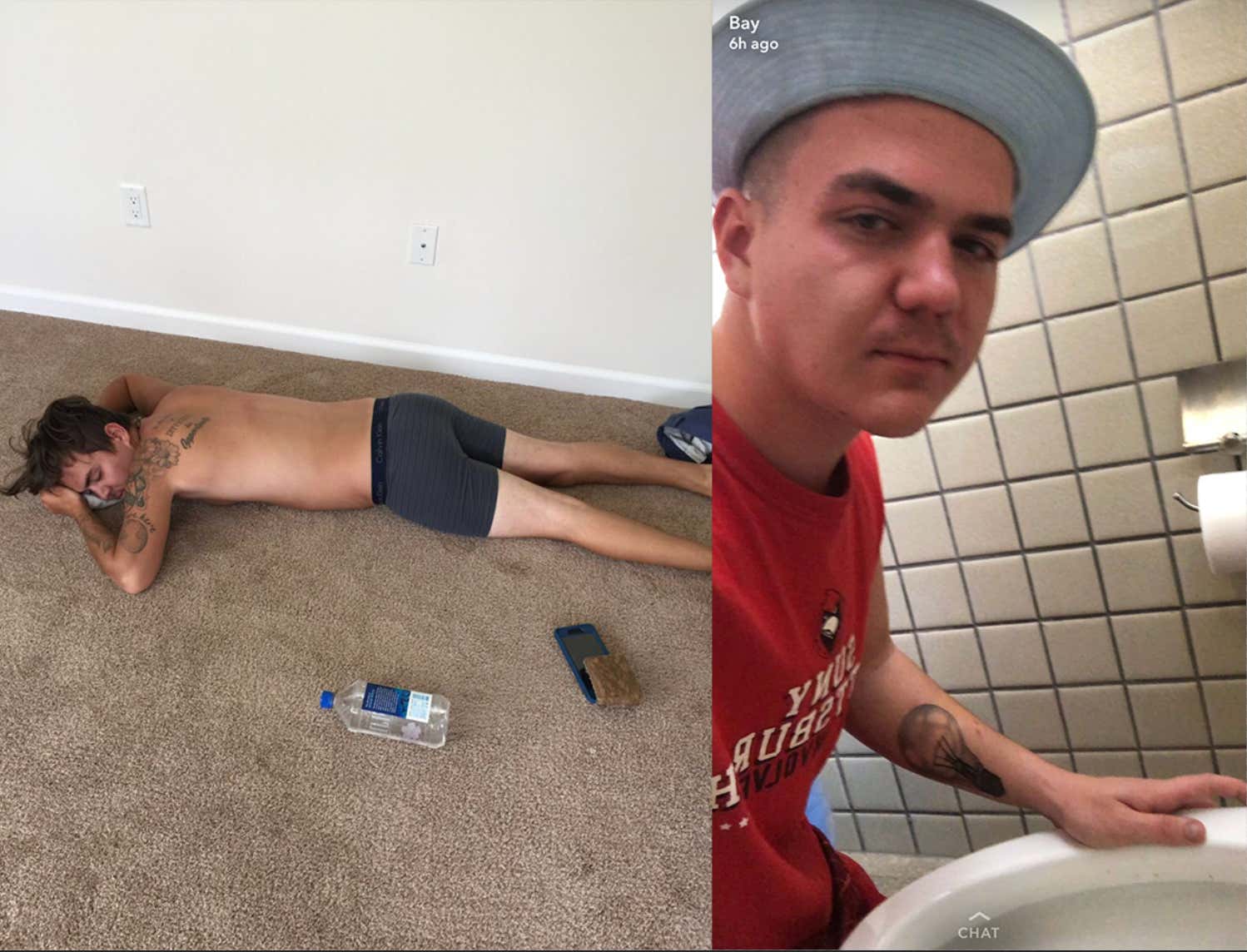 Enjoy these two pictures of me my brother was kind enough to pass along when I told him I was writing this blog. The first was me ruining my parents moving into their new home with my inability to move or dress myself after drinking multiple bottles of wine at a family wedding, the second after a night of VRBs in Thailand, where I'm pretty sure the alcohol just hits you 10x as hard. Sidebar: If you're one of those hardos (liars) who says you just absolutely never get hungover, you midas whale stop reading now. This is not for you.

To get to the point. Today’s Token CEO episode had on new Barstool hire Brianna Chickenfry, also known as the “CEO of Hangovers.” In the episode, Brianna talked about how she suffers from debilitating hangovers while most of her friends don’t (she’s 21) and it got me thinking about what drinks provide the worst hangovers.

So, with express written permission from Coley himself to do a little tiering, here are the definitive tiers of the drinks that provide the worst hangovers, assuming you are drinking a similar, large amount of each, and the quality of the liquor is all comparable. 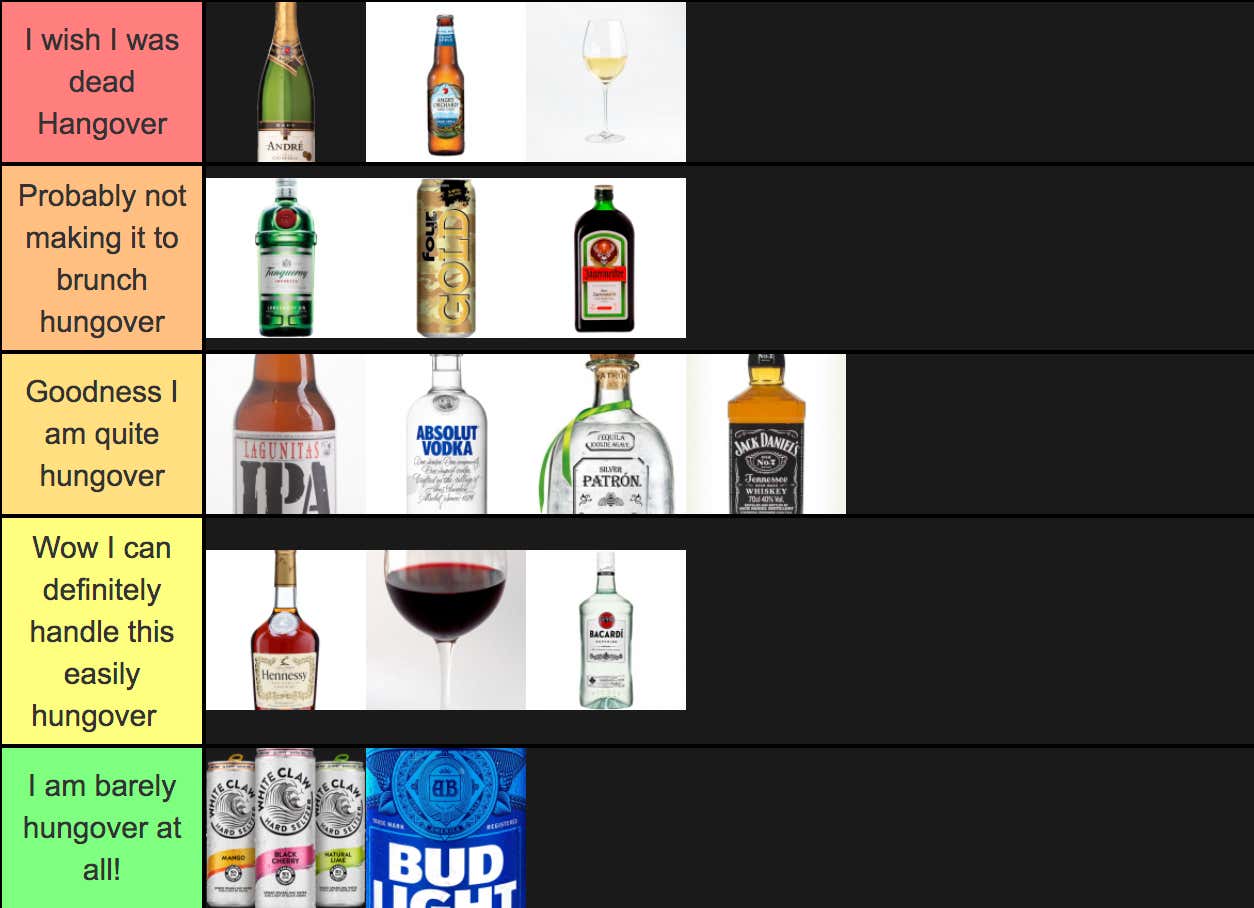 I wish I was dead hangover: Champagne, ciders, white wine

I have had champagne hangovers where I have actually convinced myself I was going to die. A night of exclusively drinking champagne is akin to stepping into the ring with a prime Mike Tyson. The sugar content in ciders just absolutely ruins your brain and leaves you with a major headache (well my dad told me this once I will admit I don’t have the scientific evidence to back up my claim but I do have the experience)  and I’m 99% sure white wine is actually just poison.

Did you know gin is flavored with juniper berries which is a diuretic and makes your body get rid of more water, leaving you more hungover? You do now. There’s that science literally no one asked for. The original Four Loko of the early 2010s would have been in it’s own tier atop this list, as it was truly the most horrifying alcohol concoction ever to hit gas station shelves, but the newer Four Loko, while still riddled with toxins, leaves you feeling slightly less dead. Jäger was a tough one to rank because I have not once drank a responsible amount of Jäger. I think the fact that I almost exclusively combine it with Red Bull with Jäger bombs likely adds to the hangover, but I just didn’t feel comfortable with it falling below this tier.

Goodness I am quite hungover: IPAs, vodka, tequila, whiskey

What IPAs lack in hangover headaches, they make up for in me nearly pooping myself if I try to do anything the morning after drinking way too many of them. I’m sure many of the grizzled, super-masculine men who are reading this have guts of steel that can handle these IPAs, but I do not and the impact a handful of 8%+ beers has on my intestinal system is truly horrifying. Vodka, tequila, whiskey all fall into the same category for me, in that while they have the ability to sometimes punch up into tier 4 and 5, more often than not I find nights dominated by these liquors to leave me feeling shitty, but not contemplating all of my life choices up to that point. Likely because they are all processed almost identically (more science).

I think Hennessy being many individuals’, as well as my, cognac of choice likely puts it in this less devastating tier because it is a quality product. I hope this fact doesn’t sacrifice the integrity of my list. Red wine just doesn’t pack the awful punch its white brethren does. I’m now realizing, paired with cognac, this is a pretty classy tier if you ignore the times in college where I was slapping the bag of a dark red Franzia. I do most of my rum drinking when I am on a beach vacation. Everyone knows nothing is better for a hangover then getting up, hitting the beach and flopping around in the ocean a bit, so these two are likely connected, but facts are facts.

I am barely hungover at all!: Spiked seltzers, light beer

Spiked seltzers spot on this list is obviously due to the high water content in the drink. There may not be an alcoholic drink less likely to provide a debilitating hangover in history. I'm not sure if my lack of hangovers attached to light beer is due to the fact that I started drinking them when I was 15, or also the higher water content and lower alcohol percentage compared to say, IPAs. I am not a man of taste, and I very much still enjoy a cheap, low-quality beer because I can drink a zillion of them and not wake up feeling like death.

This was fun. Can't wait for everyone to agree with me!