Today Major League Baseball's owners submitted their first financial proposal in hopes of striking a deal and starting the season. The original blow back of the rumored second pay-cut and 50/50 revenue split seemed to have caused the owners to rethink their plan and offer something they thought would be better for both sides. Great! That sounds promising since that plan had 0% chance of working.

After hearing what they decided on there's a very real chance Peter Nelson is telling these guys what to do.

Instead of the rumored deferred payment plan of the originally agreed upon pro-rated salaries, the owners went ahead with a pay scale option that would divide the rich and "poor" players. The richest in the league would be hurt the most while the cheaper contracts would take far less of a blow. For example Gerrit Cole's 36 million salary would turn into about $8 mill. Now I'm not out here crying poor for Gerrit Cole, I'm just telling you what this will look like for guys like Cole, Harper, Trout, etc. Not sure how you tell these guys they're taking a 75% pay cut and get them to agree to it with a smile on their face.  That's not how this is going to work. 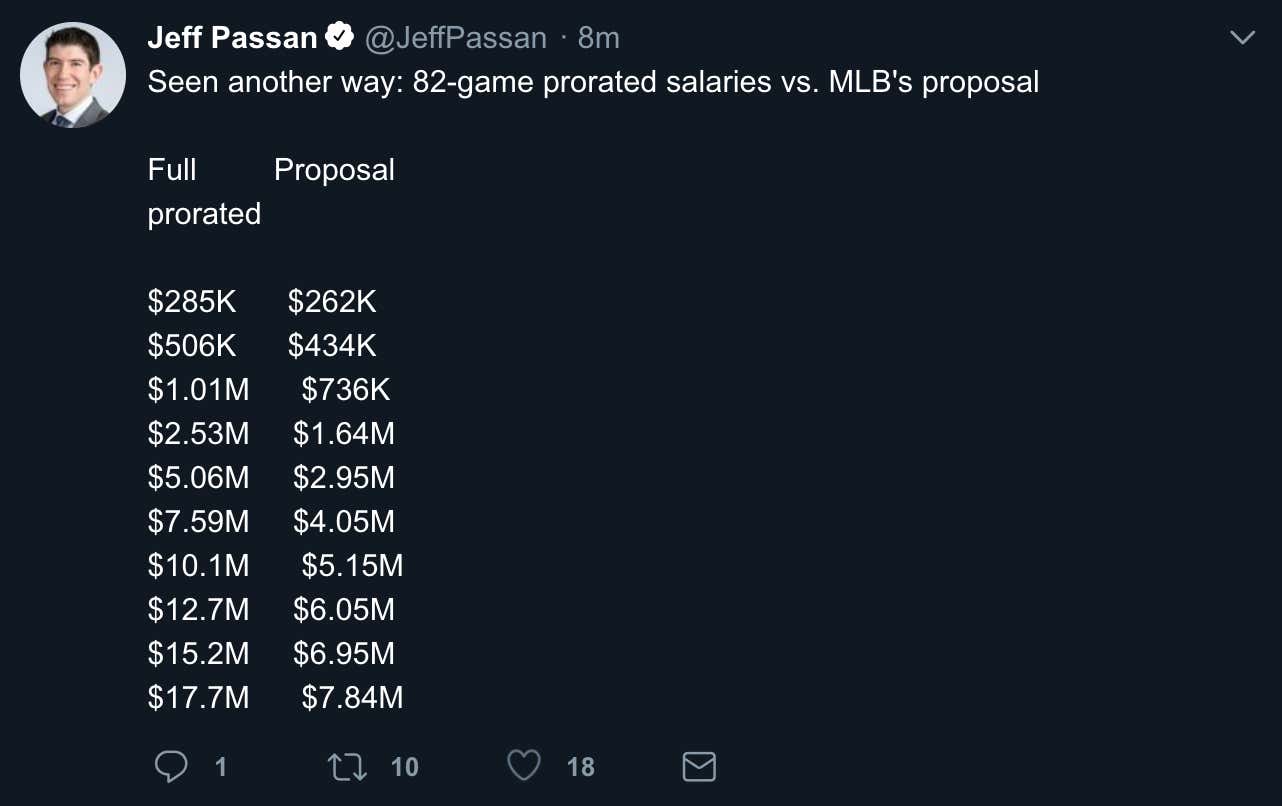 What the owners are attempting to do is divide the union and pit themselves against each other. The same shit happened with the NFL and their CBA. What are the owners going for here? Force majority of the league that doesn't have a mega contract to agree with this and outnumber the minority rich. About 65% of the players make a million or less. The owners are going after those players here and giving them the better end of the deal in hopes they don't have to pay the Gerrit Cole's of the league anywhere close to their big number. Sure $7.84 million looks like a ton of money to you but that big of a pay-cut is insane. These guys already agreed to a pay-cut in March. Why should they have to do it again? Because billionaires are greedy? Where is the logic there? Why should the players have to fall heaviest on the sword? Makes no fucking sense to me.

This is a disaster of a first offer. The reports of a deferred contract plan were extremely promising, but of course another day brought on a completely different situation. Every day is different. Tomorrow could be good, who knows. This is the first offer and it won't be the last. This week will be filled with tons of back and forth. We're for sure not off to a great start with this bullshit, but hopefully it doesn't muddy the waters too much that a compromise can still be had.

I still go back to the same thinking. How could Major League Baseball watch the NBA, NHL, and NFL come back and play while they sit out because of a money disagreement. I just don't see how at the end of the day they don't come together on some sort of middle ground where both sides are taking a loss and just play the season. The repercussions of having no season in 2020 because of millionaires and billionaires fighting over money is something they can't come back from. It's a death sentence in my eyes. You don't have a season in 2020 that could further fuck up the 2021 CBA negotiations and force baseball out of the picture until 2022.

This is by far the most frustrating sports story I've ever witnessed. Baseball just can't get out of their own way to help boost the popularity of the sport. If they're the first sport back they'll be fucking heroes to all of us sitting at home twiddling with our dicks with nothing to do. How do you grow a sport? Well how about being the only sport playing their sport???

Figure it the fuck out for the love of God.

P.S. If the billionaire owners really want to cry poor then open up your fucking books and let's see how bad it is. Don't want to show us them? Well good luck getting any sympathy here, not that you care about that.