I'm not sure if I have to pay Skip Bayless royalties for saying this, but I am officially awarding this kid the clutch gene. It doesn't matter that most bears have no interest in fucking with humans. For every 100 stories of a bear ignoring any sort of conflict with a person, there is one of them ripping apart human flesh and bone like our dearly departed Danny Boy Cane #RIP (though I have heard those rumors are absolute garbage, rubbish and UNTRUE).

However, while the entire world is praising this kid, I instead choose to admire the true hero of this video and the person that passed along that clutch gene: His father. Anybody can walk slowly down a mountain when their only other alternative is becoming bear food. But not anybody can calmly coach a kid down a mountain and recording with professional precision because you can't go viral with just a good story. Most importantly, this dad ignored his Fight Or Flight response that was definitely smashing the Flight button to talk his son down that mountain. I know that parenthood makes you a big ol' softie that has you crying at commercials and trading every ounce of what was once your life for some little person that is only half of your DNA. But not booking down that mountain knowing damn well that bear wasn't going to pass up the appetizer in its sights for the entree with the running head start is true king shit and the reason dad still gets the big piece of chicken at the dinner table after this whole fiasco.

P.S. If you asked me what year this video was filmed, I would have guessed no earlier than 1986. What a fit and what I hope is a quarantine hair cut. 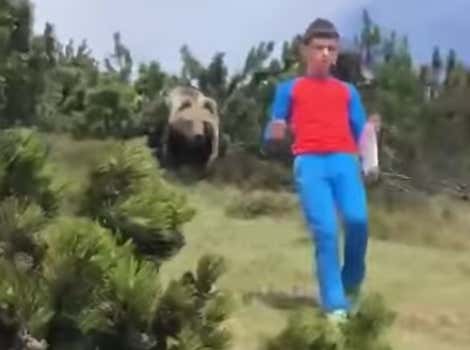