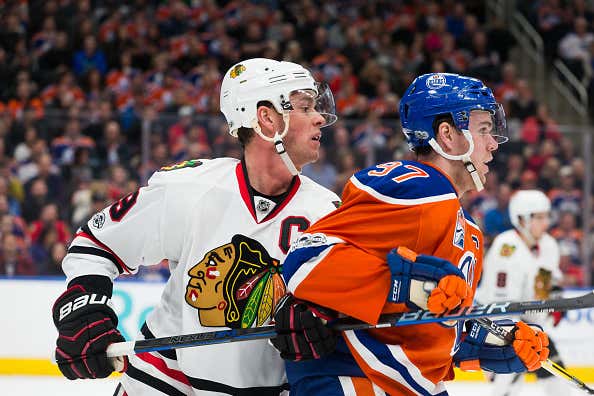 I've been DYING for a big game and now...it looks like we will have some. Or at least we might. Possibly. If other things get worked out

Pierre Lebrun and that noodle arm goalie, Dubnyk are trying to throw cold water on this whole thing, but it's too late. I am on to Edmonton in my brain. Where there is a will there is a way and I would bet that the league and the NHLPA get this worked out which leaves me in a position to dream about a run by your Chicago Blackhawks. Short series. No home-ice advantage. Just our guys, vs your guys, and…I have a hard time betting against our guys in this format.

The Oilers have two of the best three players in the series, that is true. BUTTTTT what if you just put Toews and Duncan Keith out there against McDavid and Draisaitl or one of them if they're not skating together. Then Kane can feast on their doughy underbelly. I don't hate that one bit. I don't even mind going best on best either. You don't want to trade chances against Patrick Kane, I promise.

That would allow Kane to have a favorable matchup against literally anyone else on the Oilers because the rest of the team is just not that impressive. Everyone talks about how much the Hawks' defense sucked. Well Edmonton gave up 215 goals in the regular season and the Hawks gave up 214 with just one fewer game played. So they're basically even AND…the Blackhawks might be able to add both Calvin deHaan back from injury and Ian Mitchell back from college to a defense corps. So some combo of Keith-Boqvist, de Haan-Murphy, Maatta-Mitchell. That might not be soooo bad. It's probably better than what the Oilers will run out there. And if that fails…give me Corey Crawford over any of the Oilers goalies.

I want you to close your eyes, put yourself on the patio at Declans which will be loaded up with more TVs, a delicious great tasting, less filling Miller Lite in your hands as 50-100 of us about 6 ft apart celebrate a Patrick Kane OT winner that sends the Hawks to the next round against Dallas. If you can't get there mentally then you haven't been paying attention. The Hawks aren't a Cup team but I will take them in a short series against Edmonton all day long. Might throw down a value play too

If Penn National's mobile betting app comes out before the Stanley Cup playoffs I would have to advise that they adjust these numbers. I don't want to bankrupt my own company.