Last week, when the Patriots introduced their newest free agent acquisition, former Cleveland and Green Bay fullback Dan Vitale, he was asked about having to replace a legend in James Develin. And he sounds under no delusions about the magnitude of the task before him. "It’s definitely some pretty dang big shoes to fill," he said.. "James is a hell of a player. I’ve enjoyed watching him, really since I got into the league now. He was really a role model at the position, which as a fullback, a lot of people don’t typically notice how important that role can be. I think it was pretty clear how important James was to this Patriot team over the last however many years. Definitely have some really big shoes to fill, but I’m really looking forward to that opportunity."

Well if you're going to try to fill Develin's shoes - as well as his titanic, manly neckroll - and the season is four months away and the start of training camp is anyone's guess, there's no better way than the way Vitale's doing it.

The Murph Challenge this: 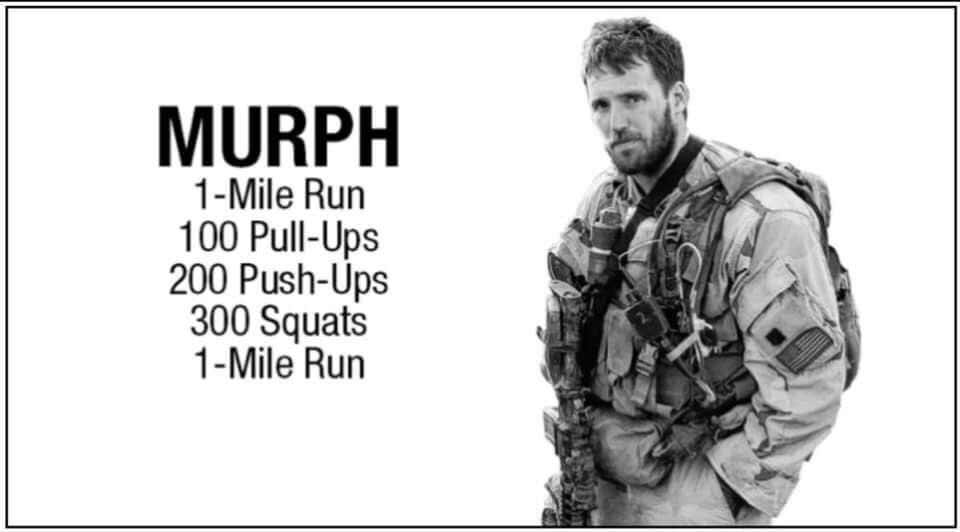 And if reading that doesn't make you want to put down the remote, take your lips off the Pringles can, start working off that Chris Farley belly and B-cups you've been developing since Thanksgiving and reclaim some of your lost manhood, note that the challenge is done in a 20 pound vest.  You can then post your time to the official website, and the proceeds raised so far have awarded over a million dollars in scholarships and a quarter of a million toward the construction of a Navy SEAL museum and cadet training center. all in honor of LT. Michael P. Murphy, who was killed in action in 2005. From the website:

LT. Michael P. Murphy (SEAL) was the officer-in-charge of a four-man SEAL element in support of Operation Red Wings, tasked with finding a key anti-coalition militia commander near Asadabad, Afghanistan. Shortly after inserting into the objective area, the SEALs were spotted by three goat herders who were initially detained and then released. It is believed the goat herders immediately reported the SEALs’ presence to Taliban fighters.

A fierce gun battle ensued on the steep face of the mountain between the SEALs and a much larger enemy force. Despite the intensity of the firefight and suffering grave gunshot wounds himself, Murphy is credited with risking his own life to save the lives of his teammates. Murphy, intent on making contact with headquarters, but realizing this would be impossible in the extreme terrain where they were fighting, unhesitatingly and with complete disregard for his own life moved into the open, where he could gain a better position to transmit a call to get help for his men. ...

At one point, he was shot in the back causing him to drop the transmitter. Murphy picked it back up, completed the call and continued firing at the enemy who was closing in. Severely wounded, LT. Murphy returned to his cover position with his men and continued the battle.

LT. Murphy fought on, allowing one member of his team (Marcus Luttrell) to escape, before he was killed. For his selfless actions, LT. Michael Murphy was posthumously awarded the Congressional Medal of Honor on October 27, 2007.

As far as Vitale, I usually wait until the start of camp before I start jumping to conclusions about new Patriots and emotionally attaching myself to guys like an irrational, needy "Alien" face-hugger. Many of whom barely see the field or even make it out of camp. (Gunner Olszewski last year, anyone? How about Zach Sudfeld in 2013? Ah the memories.) But I'm wasting no time getting on Team Vitale. There's a hole in my soul shaped like a tough, punishing, bruising lead blocker who can break through defensive fronts like Kook-Aid Man and make life easy for Sony Michel and Damien Harris. And run routes pick up yards after the catch while we're at it.

And his sacrifice to help out a great cause created to honor a true patriot who made the ultimate sacrifice helps a ton, believe me. I  think I found my next Patriots jersey purchase. And my new spirit animal.