The New Jersey Devils become the first team to overcome a 3-1 series deficit to win a Conference Finals in the NHL. New Jersey completes the comeback with a 2-1 win over the Philadelphia Flyers at the First Union Center. Patrik Elias scores twice for the Devils, including the game-winner with 2:32 left. The game is best remembered for Scott Stevens knockout blow to Flyers’ star Eric Lindros.

It was a new age of the NHL as they celebrated the new millennium with a new patch as the league was in the middle of a three-year expansion with four new teams being added. Since winning the Stanley Cup in 1995, the Devils had been among the top teams in the Eastern Conference. However, they had experienced nothing but disappointment, missing the playoffs in 1999, losing in the second round in 1997 and falling in the first round in 1998 and 1999. All three playoff exits came after winning the Atlantic Division.

The Devils went down to Georgia to open the 1999/00 season beating the Atlanta Thrashers 4-1 in the first game. The Devils would spend most of the season atop the Atlantic Division, as they held a record of 36-11-6-4 on February 15th. Over the next month, the Devils went into a deep slump as they won just six of their 20 games. Coach Robbie Ftorek would pay for the slump, as he was fired on March 24th. He had by then alienated himself from the team by benching Ken Daneyko. Assistant coach Larry Robinson would lead the team for the rest of the season. The Devils would lose their division lead, finishing second with a record of 45-24-8-5. When the playoffs began the Devils again found their game, as they swept the Florida Panthers in the first round and beat the Toronto Maple Leafs in six games to reach the Eastern Conference Finals. The Devils defense was up to its old tricks with the neutral zone trap working to perfection as they held Toronto to six shots in the clinching 30 victory in Game 6.

The Philadelphia Flyers were also playing with an interim coach, as Roger Nielson was forced to step down after being diagnosed with bone cancer. Craig Ramsey took over in February and led the Flyers to the best record in the Eastern Conference at 45-22-12-3. The Flyers had plenty of turmoil as Rod Brind’Armour was traded to the Carolina Hurricanes for Keith Primeau. Brind’Amour had been a fan favorite but the Flyers sought a second center to go along with Eric Lindros who was having trouble staying on the ice with a series of concussions. The Flyers would strip Lindros of the captaincy as he began to fall out of favor with management.  The Flyers beat the Buffalo Sabres, the reigning Eastern Conference Champions in five games and beat the Pittsburgh Penguins in six games to reach the Eastern Conference Finals. In the series with Pittsburgh, the Flyers lost the first two games at home and rallied to win the next four games, including an epic Game 4 at the Igloo that went to five overtimes, won 2-1 on a goal by Primeau.

The Devils got off to a good start in the Eastern Conference Finals, winning 4-1 at the First Union Center as Martin Brodeur turned aside 35 shots. The Flyers responded with a 4-3 win in Game 2, as Rick Tocchet and Daymond Langkow scored 52 seconds apart in the third period to give Philadelphia the lead. At the Meadowlands in Game 3, were firmly in control, winning 4-2 to take control of the series. Things would not go much better for the Devils in Game 4, as the Flyers won 3-1 with third-period goals by Craig Berube and Simon Gagne. 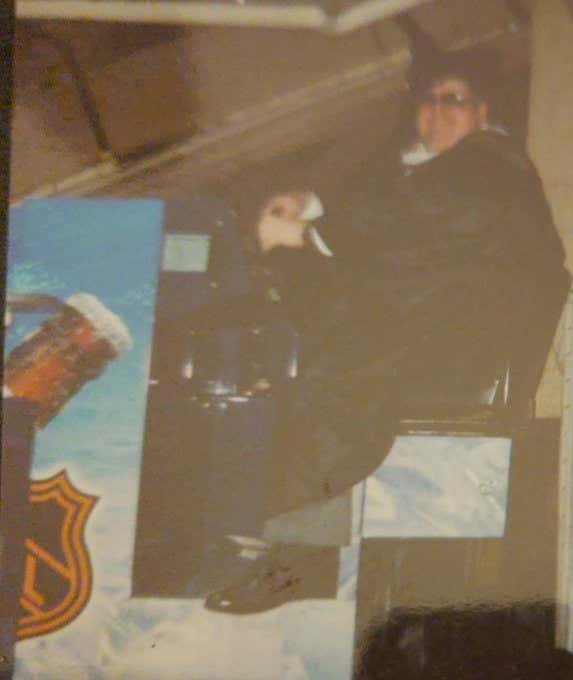 Down 3-1 in the series, the Devils went to Philadelphia for Game 5, facing elimination they need a change of luck, they need a spark as the Flyers were one win from the Stanley Cup Finals. The day of Game 5 Montclair State University held its commencement at the Continental Airlines Arena. As they waited to walk in for graduation, the MSU students stood in the back lining up near the Zamboni, one student climbed on the Zamboni for a picture. Maybe it changed the Devils’ luck. That night in Philadelphia, the Devils dominated, winning 4-1. Game 6 in New Jersey would be the Devils trap at its best, allowing 13 shots as they won 2-1 to force a seventh game. The Devils got goals by Claude Lemieux and Alexander Mogilny in the third period, as Lindros’ last-minute goal was all that Martin Brodeur would allow.

In Game 7, in Philadelphia, the Devils jumped out to an early 1-0 lead on a power-play goal by Patrik Elias. Six minutes later, the Flyers were rocked when Scott Stevens delivered a devastating check to Eric Lindros. Lindros had been skating with his head down when he was nailed by Stevens at the blue line. Eric Lindros would suffer a severe concussion and missed the entire 2000/01 season before he was traded to the New York Rangers never playing with the Flyers again. The Flyers would tie the game on a goal by Rick Tocchet in the second period. In the third period, the Devils would get the game-winner with two and half minutes left went Elias beat Brian Boucher to win the game 2-1 and send the Devils to the Stanley Cup Finals.

While Eric Lindros was in dreamland, the Devils were in neverland winning their second Stanley Cup Championship by beating the reigning champion Dallas Stars in six games. Scott Stevens would go on to win the Conn Smythe as playoff MVP.