We're having a good old fashioned debate on the Twitter because honestly, what the fuck else do we have to do? Buffets: Let's talk about them.

When would you (reader) feel comfortable going back to eating at a buffet-style restaurant? This also includes salad bars, open-air food, and anything where people can self-serve, like Whole Foods. This does not include places like the food is open-air but only the employees have access to it, like Chipotle. This is a safe space so you can vote candidly and choose to defend your vote publicly if you choose. As of this publication, the voting broke down as follows: 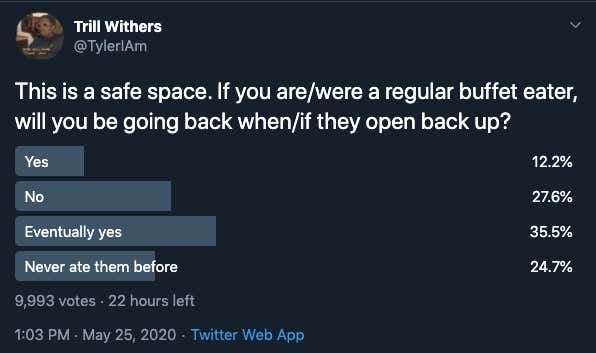 With nearly 10k votes, we've got a pretty even split here. The people that voted yes (as in they would still eat at a buffet today or never stopped eating at them) or eventually yes (as in they are looking to wait and see how things go but eventually they will be back) is about 48%. The votes for no (as in maybe they ate at buffets before the pandemic, but they're out now) and votes for never ate at them before (people that stayed away from buffets before pandemic) is about 52%.

The only thing that shocked me here is the "Never ate them before" votes. I didn't know that nearly a quarter of you were too high falutin to break bread that everyone in the establishment has breathed upon with your sisters and brothers in unity. You've never pumped your own gas either, have you? No apple pie for you savages either, I bet!!!

No, I completely understand. I'm fine with buffets. They're not something that I ever think to myself I need to go eat there but in a family or group setting, it's a pretty easy way to satisfy everybody. This is a major key if you have small children or the elderly in your squad. I'm not too good for Golden Corral's Saturday morning breakfast buffet but I am way too good for this shit here:

This is disturbing to watch. It's even more disturbing to know that this may or may not have been our own WhiteSoxDave. We didn't really get a good look at the lad and differing camera angles paint an unflattering story for Dave:

Let's all agree to view this picture but not to share it in any way. Thanks.

This article is a solid read on what will become of the self-serve industry. I do have an idea for any buffet company that is looking to collaborate and thrive. Hear me out.

The food is still all out as normal. The food is still self-serve, as normal. The difference is that I have armed bodyguards by each station. You want some soup? Cool, you gotta check in with Ramone. A slice of pizza? No problem, just let Cru watch you to make sure you aren't getting handsy with the pizza pie. Every time hot food comes out, clean utensils are coming with it. And may God help you if one of my guards sees you trying to sip soup from the ladle. You looking at Guantonomo, buddy. The money for the security guards comes because we're not serving as MUCH food at a time. Maybe there doesn't need to be 75 chicken breasts falling out of the hot tray. Maybe we start with like 34 chicken breasts and swap them out more often, along with the utensils. That and my guards are on a zero-tolerance policy, meaning that WhiteSoxDave and soup-sippers of his ilk would be looking at federal time. I think this could work.

How'd you vote in the poll?