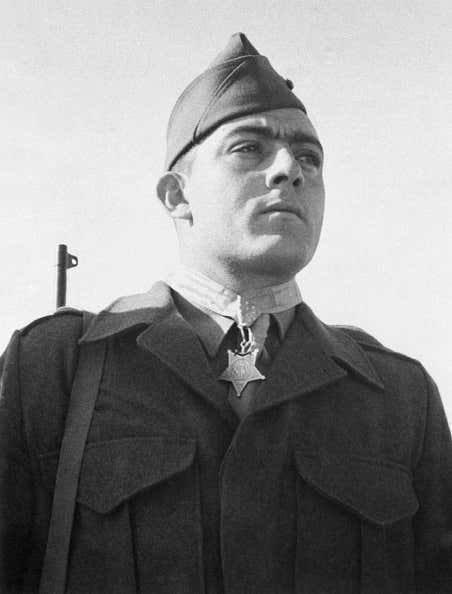 This Memorial Day, with most observances canceled and most of the cable networks doing their usual holiday tributes to the brave men and women who've served in America's parking wars, I feel like I'd be derelict in my duty if I didn't take a few moments to ... well, memorialize. To pay homage to the people who gave what Lincoln called "the last full measure of devotion" defending the rest of us. The ones who paid for the liberties we enjoy with their lives.

And the first name that came to mind was U.S. Marine Corps Sgt. John Baslone of Buffalo, NY. If you're like me, everything you know about Basilone you learned from the "Band of Brothers" follow up series, "The Pacific." But there hasn't been a Marine in the last 75 years who hasn't regarded him as a kind of secular saint. When my son was on leave in DC a few years ago, he and his friend found Basilone's headstone among the thousands at Arlington, as it's something of a pilgrimage site.

Basilone first served in the Army, enlisting a good seven years before the US entered World War II. He served three years in the Philippines, earning the boxing nickname "Manila John," and then reenlisted for another three. Upon his discharge he returned stateside and entered civilian life, but wanted to go back to Manila so he enlisted as a Marine, figuring that would be his fastest way to get there.

Months after the Japanese attack on Pearl Harbor, Basilone was sent to fight at Guadalcanal as part of 1st Battalion, 7th Marines. His D Company was pinned down, surrounded and cut off from supply lines and reinforcements by a contingent of 3,000 enemy soldiers. I'll let the text of his Medal of Honor citation take it from here:

While the enemy was hammering at the Marines' defensive positions, Sergeant Basilone, in charge of two sections of heavy machine guns, fought valiantly to check the savage and determined assault. In a fierce frontal attack with the Japanese blasting his guns with grenades and mortar fire, one of Sergeant Basilone's sections, with its guncrews, was put out of action, leaving only two men able to carry on. Moving an extra gun into position, he placed it in action, then, under continual fire, repaired another and personally manned it, gallantly holding his line until replacements arrived. A little later, with ammunition critically low and the supply lines cut off, Sergeant Basilone, at great risk of his life and in the face of continued enemy attack, battled his way through hostile lines with urgently needed shells for his gunners, thereby contributing in large measure to the virtual annihilation of a Japanese regiment. His great personal valor and courageous initiative were in keeping with the highest traditions of the U.S. Naval Service.

Or I can just show you, with this scene from "The Pacific," where he was played by Jon Seda:

He kept up the fight for three straight days with no sleep, food or break of any kind. According to the Marine Corps Times, the distance Sgt. Basilone had to cover, under heavy fire, was 200 yards. The ordnance he was lugging back and forth weighed 90 pounds. And he was picking off enemy soldiers as he went with his Colt .45 pistol. Think about that next time you're feeling all manly because you ran a 3K.

After the battle was won and the Medal of Honor was awarded, Basilone was sent on a tour of the States to sell war bonds. And as much as he appreciated the break, the war was still very much raging, and he wanted back into the fight and reenlisted. He was assigned to Camp Pendleton, turning new recruits into Marines. And while I have no idea if this moment ever happened, fictional Gunnery Sgt. Basilone produced one of the great speeches in TV history.

Eventually, serving with C Company, 1st Battalion, 27th Marine Regiment, he was part of the invasion of Iwo Jima. As a Japanese  emplacement was sweeping the beaches with machine gun fire, Basilone single-handedly went around the bunker, stood on top of it and started dropping grenades into it, killing everyone inside and neutralizing the threat. He later spotted a tank trying to navigate a minefield and taking withering fire from Japanese mortars. So he ran to it and guided the tank driver through the minefield and out of range of the shells, dodging artillery all the way.

Not long after, Manila John was mortally wounded by rifle fire, one of the 6,821  Marines to die on Iwo Jima, becoming the only Medal of Honor recipient in US history to return to action and be KIA. And he's nothing less than one of the bravest men who's ever lived, though by no means is he alone in that. As Admiral Nimitz famously said, "Among the men who fought on Iwo Jima, uncommon valor was a common virtue.” And for almost two and a half centuries, America has produced generations of men like Sgt. Basilone, willing to display feats of uncommon valor, with no regard to their own lives and safety, to protect the men they fought alongside and defend the freedom of millions of people they've never known. And all we can do in return is to value their sacrifices. Respect what they fought for. Dedicate ourselves to making sure they didn't die in vain by preserving those liberties as well. And to honor the fallen whenever we can. Especially on Memorial Day, but really every day. God bless.