Coronavirus has been especially hard on the olds. According to a May 11th article in the New York Times one-third of all U.S. Coronavirus deaths are nursing home residents or workers. Most nursing homes and assisted living facilities across the country have been completely off limits to visitors since mid March, so really the only thing that's changed is who is making the excuse for why no one is coming to see grandma on her birthday.

But there is good/bad news depending on how you look at it, because some enterprising brown-nosers have figured out a work around to visit their elder loved ones...  Air-Filled Hippo Suits.

This is fucking creepy.

According to The Winchester Star:

On Wednesday, Karin Rein was told she had a visitor. The woman in her 70s expected to wave to someone through a window, but instead, staff members handed her a face mask and gloves and led her outside.

Waiting at the main entrance was a big, gray hippopotamus with a pink tutu and a familiar voice who said, “Mom, come here. Let me hug you.”

The article didn't say how long it took to convince the septuagenarian that she wasn't dead or having a stroke. It turned out it was Karin's weird ass daughter inside of the costume; she claims she came up with the idea after remembering her son’s inflatable T-rex costume from Halloween.

Problem was, the arms on the T-rex were too stubby to allow for proper hugs, so Putnam went online to find more suitable inflatables. She bought a hippo, shark, pink unicorn, two minions from the movie “Despicable Me” and two giant Stay-Puft Marshmallow Men — Initially, staff envisioned the residents wearing the costumes. After reaching out to family members, though, they decided to put visitors inside the inflatables so residents would be free to fully embrace their loved ones.

I imagine after getting that phone call you're not feeling great about the level of care Grandpa is getting.

Apparently this tend is really catching on. TMZ talked to the owner of HalloweenCostume.com who have been seeing a run on inflatable costumes.

Holding the top spot is the "Jurassic World" T-Rex inflatable suit, which is currently out of stock. Owner Tom Fallenstein tells us only 20 of the air-filled $89.99 dino costumes were purchased in 2019 … but it came roaring back this year with 600 units sold.

Bummer so many of the popular costumes are sold out. Luckily this bad boy is still available. 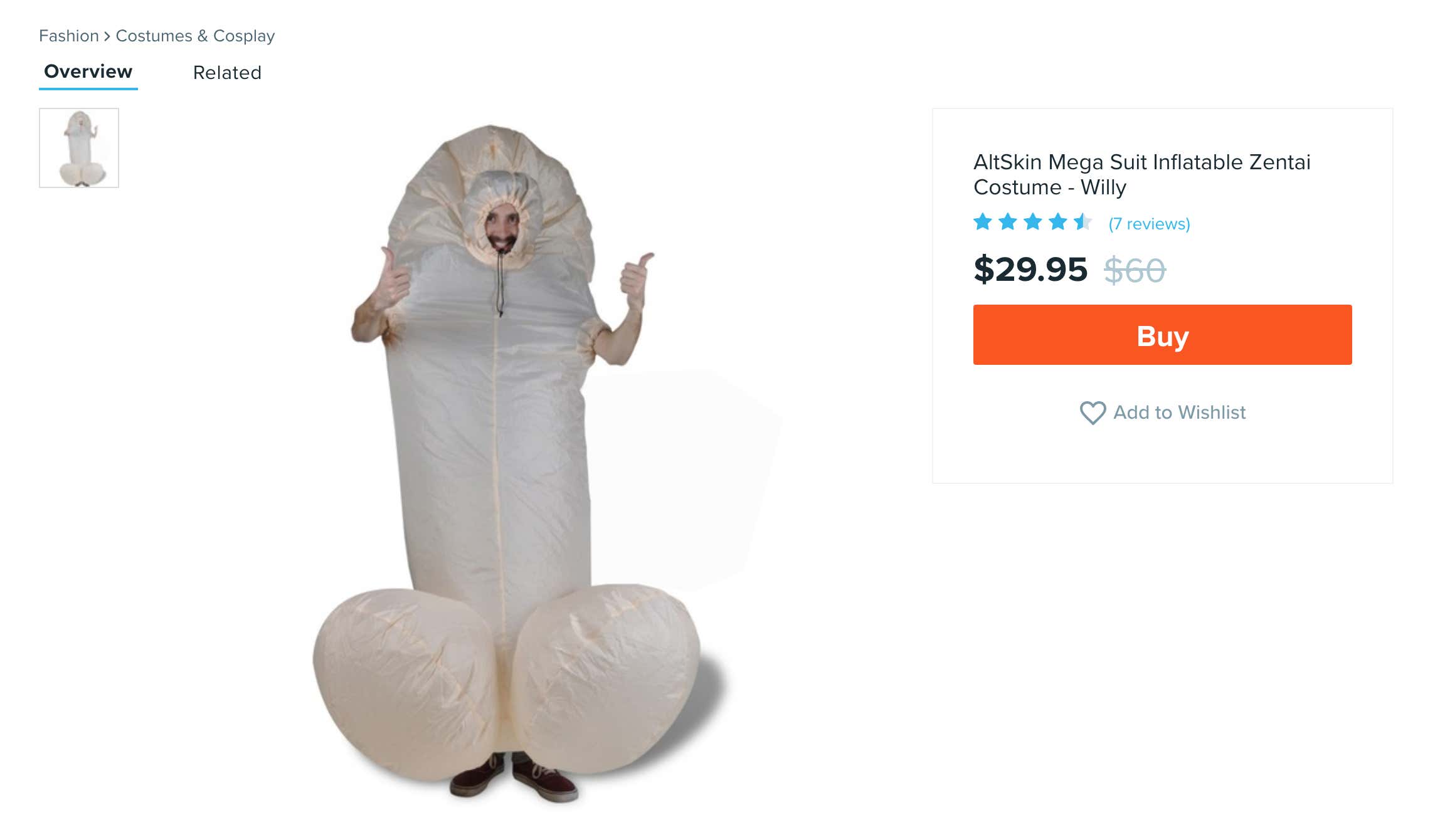 Just a thought… I would only rock this beauty when visiting Grandma and NOT Grandpa. It might be insensitive to be parading around as a giant erect penis in front of a man that is no longer able reach full mast. Respect your elders.

I get figuring out a way to hug old people is important, but I am going to go out on a limb here and say this is going to end up doing more bad than good. It's hard enough for these olds to hold on to their diminishing ability to differentiate between reality and dementia fueled delusions, now you're going to have a bunch of furries running around nursing homes offering free hugs. This movement is going to do as much damage as reverse mortgages.