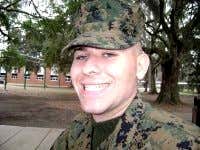 I did not know Marine Lance Corporal Kevin T. Preach. I do know his younger brother Dan. He was a senior at Bristol-Plymouth Regional Technical High School in 2008 and one of my plumbing students, where, in the shop he was called “Preach” by his friends.

From everything I read about Kevin, Dan has much in common with his older brother. From the pictures, it’s easy to see the physical resemblance and similar smiles. Dan admits looking up to Kevin since he was a little kid and "following him around and trying to do exactly what he was doing".

As a high school student, Dan was always a go-to guy in the plumbing shop. He would help any way he could. On the football field for Bristol-Plymouth, as a tight end, Dan was a spirited competitor, like his older brother had been for Bridgewater-Raynham.

After graduation, Dan had ideas of attending Bridgewater State College and also working part-time as a Plumber’s Apprentice. He also mentioned the military as another option and that his brother had enlisted in the Marines after he graduated high school. He spoke about Kevin often and the admiration he had for his older brother was obvious and sincere.

Dan came into BP in September of 2008 and asked me for a letter of recommendation. I knew that would be an easy task, Dan had earned all the praise my letter would contain. I prepared the letter immediately, not wanting to hold him up.

I concluded my letter with, “Dan is an honest young man, puts integrity into all that he does, can be trusted to complete a task, is respectful of his teachers and employers, and is well-liked by his peers. Without a doubt, I believe Dan Preach will be successful in any endeavor he chooses and an asset to any organization.”

When he finally returned to pick up the letter he had already realized the difficulty he would have finding steady work as an apprentice plumber in the current economy and decided on enlistment. His decision between the Army and the Marines came down to a matter of family tradition; his late father Daniel Mark Preach, had been a Marine, and his brother was in the Corps. Dan enlisted in the Marines.

While Dan was in boot camp in Parris Island, South Carolina, his older brother, a machine gunner assigned to Camp Lejeune’s 3rd Battalion, 8th Marines, was in Afghanistan fighting a war, his first combat deployment.

As Dan neared the completion of his basic training, statements that Kevin had been gravely wounded on Jan. 24 2009 when his Humvee was hit by a roadside bomb in Farah province, were being released by the Defense Department.

While Kevin was on life support at Brooke Army Medical Center in San Antonio, Dan completed the “Crucible”, a 54-hour endurance test in which Marine recruits survive on just three meals and four hours of sleep.

Just hours after completing his endurance test, Dan flew to San Antonio to be with his brother and family. Kevin was taken off life support that evening. He was just 21 years old. 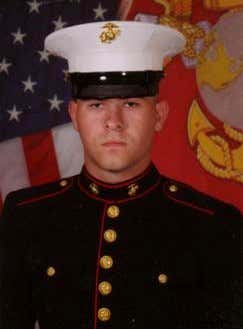 At the wake, the visitors proceeded silent, in long lines that wound their way through the crowded parlor. Uniformed Marines, some who did not know Kevin Preach personally, were there to show their support. While in that line I stood behind two young Marines. As we edged closer to the family, a graying Marine Major talked briefly to each Marine in attendance. I listened as he introduced himself and asked each soldier his name and where he was stationed. He concluded with a heartfelt “thank you for being here”.

I could see from the show of support that the Marine Corps is a close-knit brotherhood, one that is genuinely protective of its membership. It made me wonder if there is a tighter bond between men and women in any other organization…

As I approached Dan, he looked very strong, mind and body, with straight posture and clear eyes. We smiled at each other briefly and I said, “Sorry for your loss. You’re looking good Marine.” As I continued down the receiving line I knew that “Preach” had made the right decision. The maturity I saw in him was a direct result of his Marine training. I’m not sure English 101 could have prepared him for this type of tragedy the way the Marine Corps had. 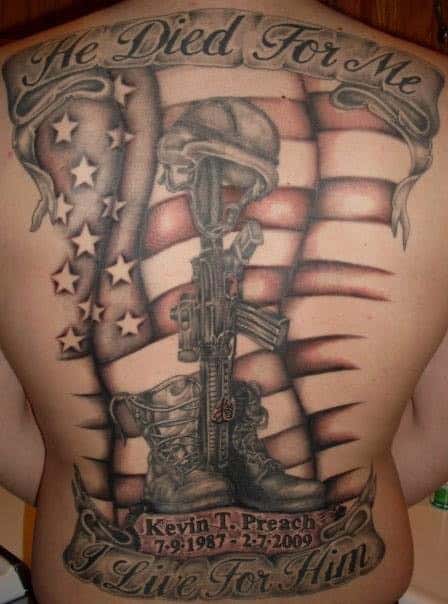 While speaking at Kevin’s funeral, Laurie Hayes’ younger son, 18-year-old Marine Private Daniel James Preach said of his older brother “He’s the guy you want your son to grow up to be and your daughter to date, and for me, he was the perfect brother.”

One thing is certain, Kevin and Dan’s mother Laurie Hayes did an incredible job raising her two sons. They both became outstanding young men.

UPDATE: On May 25th, 2022 at 12:24 a.m., Dan and his wife Tasha welcomed their first child into the world, Kevin Julian Preach (7lbs. 2 oz, 19.5"). Kevin Julian was named in honor of his Uncle Kevin and the other Marine who was KIA in the Humvee. With the addition of Kevin Julian Preach, Tasha and Dan now have The Perfect Son. Congrats!