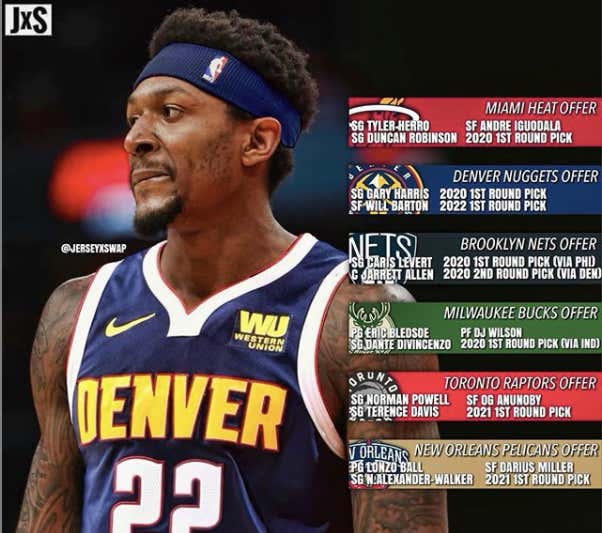 Happy Memorial Day! Before anything, even #pickems, I have to say thank you to all the brave women and men that gave their lives to protect this country.

Now, we've got ourselves a bit of a new #pickem courtesy of Jersey Swap's IG page: You’re the Wizards GM and Bradley Beal has requested a trade. These are the six best offers you get... which deal are you making assuming he wouldn’t come back?????

Love it. With that said, let's rank these in reverse order.

This one is comfortably last for me. If I'm trading Bradley Beal, I'm looking for young, cheap talent and picks that could potentially end up in the lottery. This trade provides me neither of those. Will Barton is 29 and on his third contract. Gary Harris is only 25 but he's owed $40 million over the next two seasons and is coming off his worst offensive season since his rookie year. I know you have to have at least one big salary come back in the trade to make the deal work, but I can do better. The Nuggets winning percentage has gone up each of the last three seasons and that figures to continue with Beal in the fold so those picks will be in the mid-to-late 20's range. No thanks.

We're getting warmer. Bledsoe is coming off of another All-Defensive team caliber year but he's 30 and on his third contract. I know he's friends with John Wall, but he's also battled injury concerns. DiVincenzo had a nice campaign and could break out in a bigger role but DJ Wilson took a step back after a solid sophomore season last year. The draft pick is projected to be #19 in this year's draft. Again, no thanks.

I'm usually against trading stars for stuff, but this is some pretty good stuff. Norm Powell followed up a season where he came off the bench for a title team by stepping into the starting role and having a lights-out shooting season (50/40/84 splits). Anunoby bounced back from an injury-plagued season to defend across the spectrum, as well as hit 38% of his treys. Davis had a home run of a rookie season after being undrafted somehow. These three guys will make around $15 million combined next season. I like them all in theory, but are they bringing the Raptors system with them? Are Nick Nurse or any of the player development guys the Raptors have coming along? The 2021 pick will be in the late 20s.

Lonzo is the reason this trade is ranked higher than Toronto's. As much as I love those three guys, I'm not sure if any of them makes an All-Star team. That's not the only way to measure their value of course, but it helps. And I think Lonzo could definitely make an All-Star team. He's shown he can run an offense or play next to another PG. He's shown he can defend multiple positions at a plus level and he answered questions about his durability/3P shot this season. He can fit in on just about any team and make them better, but he also has All-Star/All-Defense/All-NBA potential.

NAW had a predictably up-and-down season as a rookie but showed some promise on both ends of the floor. Miller is rehabbing from injury but has shown to be a plus shooter (39% from 3P on five attempts per game since 2017) when he's healthy. The pick here is interesting, as well. Like the Raptors pick, it comes in the 2021 draft which is projected to be much better than the 2020 draft. Unlike the Raptors pick, I think it has some potential to land in the lottery. A Pelicans team with Beal and a healthy Zion will absolutely compete for the playoffs but it's a much tougher slate than in the East. The Lakers, Clippers, Nuggets, Rockets, Mavericks, Thunder, and a healthy Warriors team feel like pretty safe locks. Who knows what happens with Utah, but that still leaves NO competing with them, Portland, Memphis, San Antonio, Sacramento, and Phoenix for one spot. There's a chance that pick ends up in the lottery and with the reformed odds there's a decent chance it ends up in the top half of the lottery.

Rumor has it that if you go into TD Garden at night and close your eyes, you can still hear Caris Levert giving the entire Celtics team buckets:

Levert was well on his way to an All-Star selection last year before injury and bounced back this year with career highs in points (17.7), rebounds (4.1), assists (4.1) and 3P percentage (38% on five attempts per game). Allen (11/10 on 65% FG shooting in just 26 MPG) is dying for a bigger role with a team after DeAndre Jordan came to town to split minutes with him. The hope is that both players thrive in bigger roles and alongside a healthy John Wall. Those draft picks are projected to be #20 and #55 in this year's draft.

I think which trade you select tells how you feel about Wall getting healthy. I am deliriously optimistic and thus I am looking for a trade to complement what Wall does well. This isn't to say that a 29-year-old Wall coming off of serious injury dictates all your decisions going forward, but you're not moving that contract anytime soon. You might as well try to capitalize off of it by putting guys that fit with him.

Herro is my piece with All-Star potential. In his head, I think Herro already believes he's a six-time All-Star and I like that kind of confidence. Before The Rona stopped everything, Robinson was on pace to eclipse 300 made three-pointers (only Harden and Steph have accomplished this).

In fact, you'll see that he and new Wizards teammate Dāvis Bertāns were two of the best 3P shooters in the league. Imagine the spacing they'd provide together knowing that each of them has 25+ foot range (Bertans hit 40% of his threes from 25-29 feet, Robinson hit 42% on a combined 12 deep attempts per game). Consider that Herro would be the third-best shooter of the three and he hit 39% of his triples (5 attempts per game) as a rookie. We'd get absolutely slaughtered on defense but we just traded our best player so we're not necessarily looking for immediate title contention.

Imagine Wall after a year and a half of rest getting to run with three of the best shooters in the league. It would be drive-and-kick euphoria. I can't imagine Iguodala would want to stay around in Washington but I do believe you could flip him to a contender for a future pick. The draft pick is projected to be #23 in this year's draft.

How do you rank the proposed trades?