I don't know when or why it happened, it was some point last year. I became consumed by tiers. It became my life, my passion. To be so correct in such a public forum on such a wide variety of topics ranging from  teachers at high schools I'd never even heard of all the way to planets, fine art and birds.

So today, on the sabbath no less, I was tasked by a Twitter user to tier brick walls.

That's the tier life. You never know for when or why the bell will toll, only that you can bet your bottom dollar that it will - in fact - toll. And this brick wall tier tolled so goddamn loud I couldn't ignore it. What am I to do? Have people living their lives unsure how Weathered Edge and Cut Fieldstone stack up against Bavarian Castle and Tumbled? There's enough uncertainty in the world these days, check your email right now. Every company whose mailing list you've signed up for is telling you just how uncertain these times are. I don't need to add to said uncertainty. So I went into the lab, went deep in my bag, and (correctly) tiered brick walls. 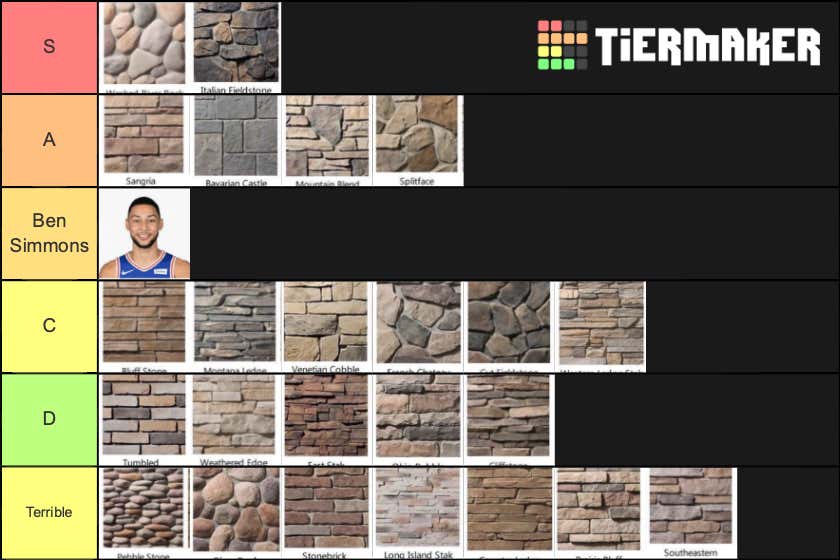 Self-explanatory. They don't make brick walls better than these.

The people taking this as some sort of dig are clearly unfamiliar with basketball jargon. Being a brick wall in basketball is a good thing. It means you're a defensive force. You can't get by him. That's Ben Simmons in a nutshell.

Middle of the pack stacks. You wouldn't kick any of these out of bed but there are better options on the table as well. This is like having the fifth pick in the NBA Draft. You'll get someone who has a long career and will contribute but probably wont turn your franchise around.

Not going to say anything too mean about these but, I mean, c'mon. Grow up.

Imagine being River Rock, thinking you're hot shit, and then washed pebble stone shows up on the scene and basically puts you out of a job? Embarrassing. Pebble stone? Are you kidding me? Fuck you. Long Island Stak is maybe the most accurately named piece of trash in the history of trash and names. Prairie Bluff... please. I've had enough. Sorry for ending this blog on such a low, unbecoming note.