Shawn Green of the Los Angeles Dodgers has the game of a lifetime, going six-for-six, with four home runs. Green’s performance leads the Dodgers to a 16-3 win over the Milwaukee Brewers at Miller Park. Green, who also had a double set a new major league record for total bases in one game with 19.

Shawn Green was born November 10, 1972, in Des Plaines, Illinois. Green’s family often moved when he was growing up, finally settling in Tustin, California, located in Orange County. Shawn Green had a scholarship to Stanford but chose to sign with the Toronto Blue Jays, who drafted him 16th overall in the 1991 draft. He attended college in the offseason and made his debut in 1993 as a September callup.

In 1995, Shawn Green finally made it to the majors for good, hitting 15 homes runs as he finished fifth in Rookie of the Year balloting. Quietly Shawn Green developed into a consistent hitter for Toronto, with his best season to date coming in 1999, as he was named an All-Star for the first time, with 45 doubles and 45 home runs, with 123 RBI. That season Shawn Green won the Silver Slugger and a Gold Glove and expressed a desire to play closer to home. Due to become a free agent after the 2000 season, the Blue Jays were forced to deal Green to Los Angeles Dodgers.

With the Los Angeles Dodgers, Shawn Green continued to bud into a star, slugger with 44 homers and 24 doubles in 2000. A year later, Shawn Green hit a career-best 49 home runs. Shawn Green was off to a slow start in 2002. Through 42 games, Green was hitting .231 and had just three home runs. On May 21st, things began to turnaround for Shawn Green as he had a pair of home runs in an 8-6 loss to the Milwaukee Brewers at Miller Park.

The Dodgers and Brewers split the first two games of the series, with the series ending with a Thursday Afternoon game. The Dodgers managed by Jim Tracy sat at 26-20, while the Brewers already changing managers from Davey Lopes to Jerry Roster were floundering at 15-31. Glendon Rusch made the start for Milwaukee, while Kaz Ishii got the start for the Dodgers. Los Angeles jumped out to a 3-0 lead in the first inning as Shawn Green doubled home Cesar Izturis. Green later scored on a single by Brian Jordan, while Eric Karros scored on a sac fly from Marquis Grissom. The Brewers got a run in the bottom of the first as Alex Ochoa walked with the bases loaded.

In the second inning, the Dodgers added five more runs to chase Rusch from the game. Shawn Green hit a three-run homer, and Brian Jordan hit a two-run shot to make the score 8-1. In the fourth inning, Green hit his second home run, leading off the inning against Brian Mallett. Shawn Green hit his third home run in the fifth inning to make the score 10-1. Ochoa knocked in a run in the fifth to make it 10-2. In his fifth at-bat in the eighth inning, Shawn Green had single and scored on a home run by Hiram Bocahica.

The ninth inning saw Dodgers holding a 12-2 lead, with Jose Cabrera trying to end Milwaukee's misery. With two outs and a runner on base, Adrian Beltre homered to make it 14-2 in favor of the Dodgers. Next up was Shawn Green, who became the 14th player in MLB history with four home runs in a game. As Green was celebrating, David Hansen made it three consecutive home runs to finish the Dodgers scoring with 16 runs. Alex Ochoa would hit a home run in the ninth to make the final 16-3. 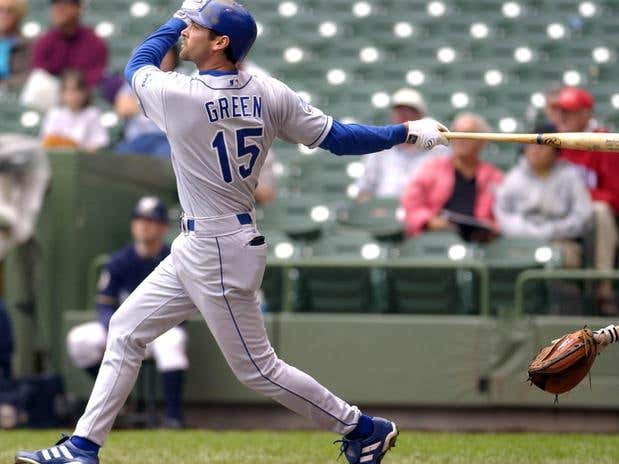 Shawn Green’s day saw him get six hits in six at-bats, with four home runs double and a single for 19 total bases setting an MLB record. Shawn Green scored in each at-bat and had seven RBI in what is one of the greatest single-game performances in MLB history. Shawn Green would finish the season with 42 home runs and 85 RBI as he returned to Miller Park to play in his second All-Star game.