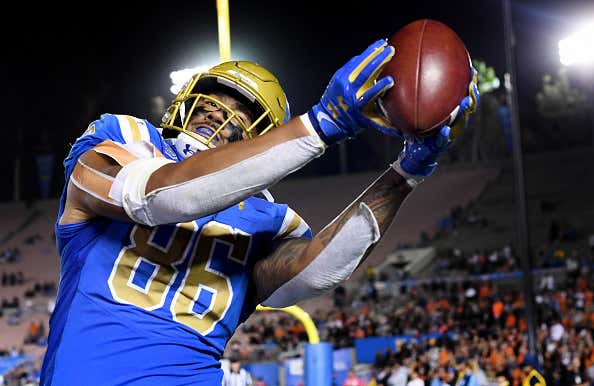 It's Memorial Day weekend. Which means that ordinarily I'd be following the natural rhythms of the calendar and be at a cookout, drowning myself in Summer Ales that haven't passed my lips since August and cueing up the playlist of Buffett music and reggae and country songs about getting drunk in a beach chair. But since cruel fortune has decided to put up a detour before I got to that particular exit of happiness, I have to improvise. And my internal GPS is directing me toward the Patriots 2020 rookie class to make me feel that drunken cookout feeling until I can feel human again.

Which brings me to my question about third round pick (91st overall) Devin Asiasi and whether he can fill the gaping hole in the Patriots offense that has been there really since Rob Gronkowski's last healthy, productive season, which was 2017.

There have been a few profiles of him in the last couple of weeks. Some video breakdowns. Reports quoting his old coaches and some scouts, that sort of thing. And as they are with any draftee at this time of the year, they're all wildly positive. And tend to build on some of what I wrote about him on draft weekend:

Asiasi was the second tight end to come off the board after consensus No. 1 Cole Kmet. And he's the highest tight end selection by the Pats since the took Gronk in the second round in 2010. The first thing you do is look at his size/speed combination and it's hard not to position-profile him into one of those third tackle types Belichick says he's not interested in. But he's a more athletic and dynamic route runner than his tank-like build would suggest. And he's the best YAC guy in the Class of 2020, with the ability to not just run through tackles, but around and, at times, leap over them. As a matter of fact, on his 44 receptions last year, he broke six tackles. … He's also 23, having spent a whole year at Michigan where he made all 13 starts before transferring back to his home state, with Jim Harbaugh's coveted seal of approval. He also played in multiple systems at UCLA, first being recruited by Jim Mora with his pro-style offense, and then transitioning to Chip Kelly's, and was productive in each. He's still relatively inexperienced though, with only 148 career receiving yards before having a breakout final season with 641. And for all his relative lack of top end speed, he still averaged 15.2 YPC.

My favorite profile of Asiasi is from The Athletic (paywall) last week, before the Pats signed him to his rookie deal:

The rookie third-rounder was already loaded up on new responsibilities – note cards and play sheets with schematic principles, route concepts and blocking assignments that can often be confused for a foreign language. Asiasi was still euphoric over the idea Bill Belichick liked him enough to trade up for him. …

But Asiasi wasn’t thinking of any of that, not for that moment at least. Instead, he asked his former coach at De La Salle High School, Justin Alumbaugh, if he could join a Zoom call to share some inspirational words with their offensive linemen.

Alumbaugh couldn’t help but share his favorite Asiasi story. De La Salle needed a third-and-5 conversion to run out the clock in the 2015 state championship with a 28-21 lead against Corona Centennial, which had the most prolific offense in California history, and Alumbaugh’s staff was scrambling for the right play call when Asiasi made a proclamation.

It was De La Salle’s most basic triple-option play, and it required Asiasi to seal off the defensive end to procure a running lane. …

Asiasi didn’t want the ball and the individual spotlight. On the final play of his high school career, Asiasi wanted the block and the team glory. …

Everybody knew right then and there we were going to win. We ran it, and he literally picked up the (defensive end) and drove him 9 yards. We got a 9-yard gain. Our runner tripped on the pile that he created. He looked over at the sideline and all of us, and it was like, man, that was great.”

Look, I get it. A block in high school isn't going to matter a rat's taint if Asiasi whiffs on a Frank Clark blitz in Week 4 and puts Jarrett Stidham in the blue tent. But there's something "Remember the Titans" about the story. Or a football Jimmy Chitwood. Only instead of "I can make the shot" it's "I can make the block" and delivering it for the win. It's that kind of thing that no one in the stands would ever notice unless Asiasi got earholed by the defensive end, but his teammates ate it up and his coach is still talking about it years later.

Anyway, there was a more applicable piece on him in The Athletic before that, quoting two NFL executives:

"Oh, I love him,” an exec said. “I think they hit a grand slam, but he fell to them for a reason. He was suspended. The character is concerning. (Editor’s note: Asiasi was suspended for three games to start the 2018 season for a violation of team rules.) But he is better in and out of his breaks than (Cole) Kmet and a better blocker right now. He is a more vertical, wider-angle cut receiver.”

Another exec used the “G” word when describing Asiasi.

I imagine we can go around America door-to-door and get 330 million co-signatures on that "No one is Gronk" statement. And given the recent history of this franchise, there's a reason to be leery about a big school tight end with some character issues in college. Ahem. But there's nothing not to like about these other assessments.

These clips are like an IPA, backyard cheeseburger and a paper plate piled high with Cape Cod chips for my soul. Even bearing in mind that few tight ends come in an have hugely productive years as rookies. Gronk himself was a matchup nightmare the day he first stepped onto a field and every game after that. And still his rookie numbers were by far the lowest for a full season of his career, with just 42 catches for 542 yards and 13.0 YPC. Though he still produced 10 touchdowns.

Though Asiasi is three years older. He's already played in three different systems. And the bar is so incredibly low after the Patriots offense had almost zero production from the tight end spot last year. And limited production the year before that because Gronk was so banged up. Such that a season out of Asiasi even approaching Gronk's 2010 rookie year would be a godsend. If he somehow surpasses it, he'd have one of the most important rookie seasons this team has had in a decade at a crucial spot.

Gronk's retirement left a crater in the Pats offense so deep they should offer donkey rides to the bottom. Maybe it's just the lack of alcohol talking, but I believe Devin Asiasi is the guy who can fill it. And watching his workouts doesn't hurt my case one bit.