So it looks more and more like we are going to get this 24 team playoff/tournament thing at some point this summer. I am glad we are getting sports back, I am thrilled that we are getting our economy back, and hopefully we are going to have our normal life back too. I've blogged about the potential format like a half dozen times now, but last night talking it our on Marina's podcast was the first time I let it sink it that maybe this won't be such a good thing. Everything that I LOVE about the NHL and the NHL playoffs will be stripped away. I don't know the financials. Maybe this re-start hub city bubble hockey is really needed for the viability of the league. The more I think about it, the more I wonder if having this tournament is worth the risk and worth impacting next season. Think of all the things that we are going to miss out on this summer and tell me if these playoffs will be enjoyable

A time honored playoff tradition. Thousands of Maple Leafs fans make the decision to pour into the square to stand and watch the game outside instead of from the comfort of their own couch just so we can see their hearts get ripped out of their chest and punted to the moon on live TV. I am sure we will get reaction videos from inside individual homes when the Leafs inevitably lose to the Blue Jackets in the first round of the playoffs, but it won't be the same without seeing thousands of souls crushed all at once.

The Winnipeg White Out 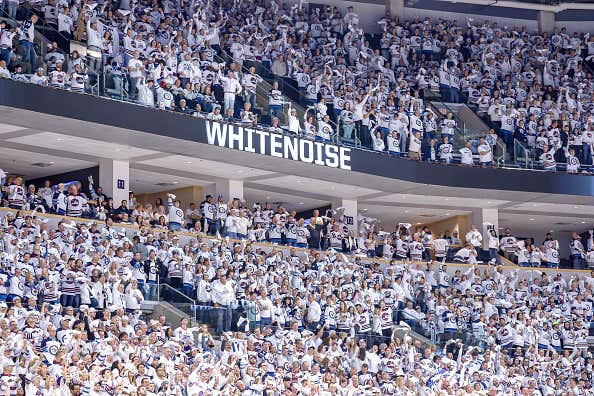 The Winnipeg White Out is so sweet. When the fans show up like this it makes every game feel just a tick bigger and more intense. Thousands of people, an entire community, in lock step with each other. It matters more in places like Winnipeg and the fans are a huge reason why the NHL playoffs are so special. Watching a Winnipeg crowd give their team momentum in real time is incredible. Home-ice advantage is just gone league wide. I've seen fans from Boston and other top teams complaining about the bye week mini tournament to determine seeding and it's like...who cares if you drop from 1 to 4? It's not like you'll have home ice advantage. It's not like you know who will even show up at full strength or intensity as your opponent. It's not the same thing as getting to face a normal 8 seed if you're the #1 team in your conference. It's a crap shoot and a big part of that is because you won't have to go to barns in Winnipeg, Colorado, Boston, Chicago, Montreal, Philly, etc that would be absolutely ROCKING under normal circumstances.

And when I say fighting, I am really talking about the emotional and physical intensity that boils over into fights over the course of a 7 game series. Teams grow to hate each other. They go to war against each other. Every hit, every face wash, every whack, every snow of the goalie. It adds up and then you get this raw, organic, spur of the moment fight and it is absolutely electrifying. Anyone who says otherwise is lying. Fighting in the NHL, under those circumstances, is fantastic. I have a hard time imagining the players ramping up the intensity to 11 this summer. I mean, how can they? It's not going to be the same. They're not going to feed off of that energy from the crowd. I can't believe the emotion will be anywhere close to what we normally see in the playoffs

The handshake line has become a joke people make about hockey to the point that people think it isn't cool or special or a good tradition. It is. It's funny how much some people over play it, but it is definitely still cool. Definitely still has it's place. Or at least it did until dead fish Faucci said he wanted handshakes canceled forever. I'd miss the post-series handshake line.

There's nothing better than an OT playoff goal and the mayhem that ensues. The dog piles, the hugs, the fans going crazy. I don't know if the celebrations will be gone completely, but they'll definitely be different.

Both Montreal and Chicago are getting into to the playoffs in this format. Those two teams being the playoffs is always a great thing, but not having Big Jim and that woman who kind of reminds me of Ursula from The Little Mermaid is going to sting

What is she saying? I have no idea, but it's beautiful and it'll be missed.

The best part of this proposal is the schedule. There will be games all hours of the day, every day, for like 2 months. A March Madness style schedule for the NHL. You go to bed at 3AM after a triple OT game, you wake up, make some coffee, and then boom 11AM rolls around and it's time to do it all again. Your eyes are going to be bloodshot. That natural rush you get from typical NHL playoffs isn't going to be there because of all the things I mentioned. You're going to need some skin in the game. You're going to gamble and you're going to lose because 1) you always do and 2) this is going to be even more unpredictable than ever. Are the Blues even going to be good? How about Boston? How have these guys been training? Are lower seeded teams even going to try? Are teams like Dallas going to find the motivation? Nobody knows. Nobody knows if the players will even take this seriously. They risk life and limb and step in front of 100mph slapshots and play with broken bones in the regular playoffs. Will they do that for this? No idea. It's unpredictable and that is going to be expensive.

A moment that has always been revered is now going to be met with "eww gross, germs". Every player that wins might have to put on those white gloves the keepers of the cup wear. Steals a bit from the moment. Not to mention this Cup will never be fully respected. It's tainted. Yeah you won it…kinda.

This whole thing reminds me of the Seinfeld pitch to NBC

Then why am I watching it?

BECAUSE IT'S ON TV

I am going to watch. I am going to enjoy it, but it won't be close to being the same. I am not sure this is better than just bagging the season and starting 2020-21 on time in October. In my head, this neutered version of the playoffs is going to feel like the IIHF World Championships that usually happen in May. It's on in the middle of the day. I watch. The hockey is good, a lot of the stars are there, but fans typically aren't, and the players try, but only sort of. When you watch one of those games during the day and then the NHL Playoffs at night it looks like a different sport all together.