My fourth blog calls for a story.

The other day a fan posted a couple photos of a game jersey of mine. Little did he know, I was actually a little tight when seeing the photos. I thought, "how in the fuck did he get that jersey? I want that jersey." I'm actually not as pissed off as that sentence sounds. I have ZERO BEEF with this person and I hope he takes care of my jersey for life.

I want Preston Penn to know that the jersey he has was the only jersey I got to wear during my rookie year. I was on p-sqaud (practice squad) for 16 weeks and was finally called up to the active roster for the last game of the season. S/O THE P-SQUAD BOYS. That life is a grind and I'm sure I will write about it someday.

That particular jersey also has a funny story behind it. I call it my "Pee Game."

I feel like any football player worth their salt has a Pee Game. A game when you piss your pants to keep warm or because your options are limited. My Pee Game came on December 29, 2013.

We lost the game to end our season with a WHOPPING record of 3-13. Total shitshow of a year and an awful finish to the season. Not for the boy, though. I felt like I was the ultimate winner getting to finish the season on the active roster and playing backup for London Fletcher during the final game of his 16-year career (s/o Uncle Fletch). I was oblivious to the reality of our season. I'm actually laughing out loud while doing my research on that game. Jeff Gray at SB Nation wrote, "Two of the league's worst teams saved their worst performance for the final game of the season. The New York Giants beat the Washington Redskins, 20-6, in a rainy, injury-riddled, turnover-marred embarrassment of a football game that mercifully brings a close to both teams' seasons." Holy shit we were bad.

Your boy had a total of eight special teams snaps that game and I padded my stats with one tackle on kickoff. I was so hype seeing my tackle posted on NFL.com and my Wikipedia stats page: 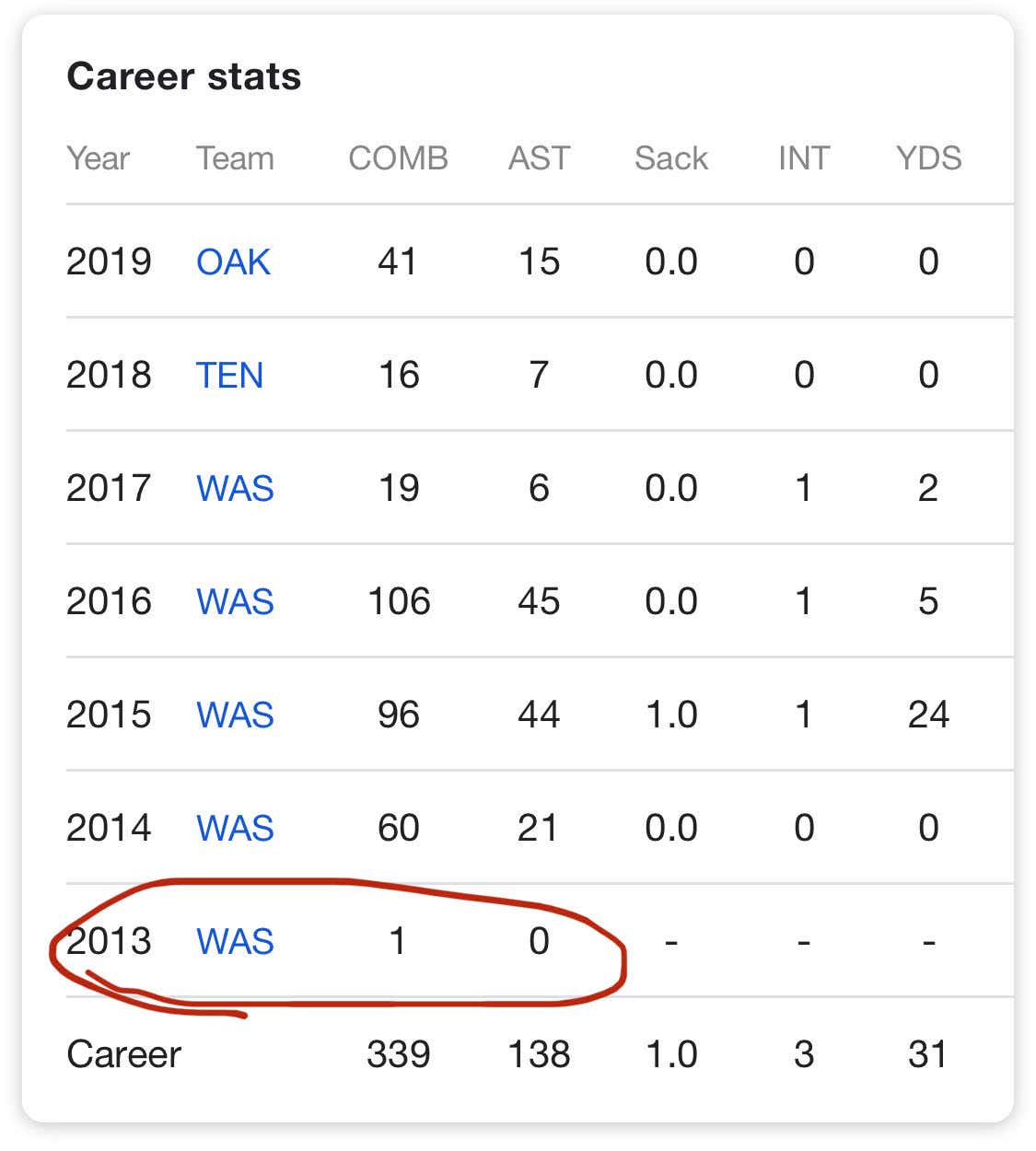 It officially became my Pee Game midway through the third quarter. The boys were cold as hell on the sidelines and I started to feel that urge. You know, that urge when you're unsure if you're going to have to pee soon so you give it a little push to see where you're at. Push too hard, a little fart squeaks out... that means you got a while. Push and feel that flowing sensation... you know it's coming soon. I had the sensation.

What do I do? I had just been activated onto the active roster that week. I was in a spot where I wasn't going to do anything to mess up my opportunity, and that included not being some practice squad guy walking up to someone in charge and asking where I can go to the bathroom when we are getting our asses beat in cold, rainy weather. When you're a young rookie you picture everything that could possibly go against you in a coaching staff meeting. I imagined a coach asking, "what'd you think of Compton?" And then someone responding, "he asked for a bathroom break in the middle of the third quarter. Kid has no clue. Cut him." Lol that's how nervous I was. So I improvised. I was under one of those big coats that you see us wearing over our pads on the sidelines during games, and I told my teammate I was going to piss myself and ride it out. The sensation came. I gave it a push and let it flow. I actually had to start pushing harder and hurrying because it was third down and I was going to have to go out onto the field for the next play. I pushed hard, farted mid-flow, and trotted onto the field to finish the game.

Plus, you don't ever want to risk pulling your little soldier out mid-game. You never know who's watching. Just ask my old Special Teams Coach Ben Kotwicka (any Redskins fans reading this will understand that joke).

So congratulations, Preston Penn. That jersey holds a good memory. Maybe even a stain somewhere deep in the material.

Jordan can have his Flu Game. I got my Pee Game.