NY Post- Embrace the awkward. That was part of Eli Manning’s message to the Class of 2020 in a sincere and heartfelt commencement speech to graduates who did not experience an on-site ceremony amid the ongoing COVID-19 pandemic.

“You see, I don’t mind being in awkward situations or doing things I don’t necessarily want to do,’’ Manning said. “Like becoming the Giants backup quarterback after winning two Super Bowls and walking away with the MVP. Embracing awkward is worth cultivating, because life, like this graduation, rarely goes as planned.’’ Manning, recently retired after 16 years as the Giants quarterback, spoke as part of iHeartMedia’s campaign “Commencement Speeches for the Class of 2020.’’ Other celebrities to participate include John Legend, Hillary Clinton, Tim McGraw and Bill and Melinda Gates.

Manning’s 11-minute address was filled with self-deprecation, words of inspiration and his acknowledging his own failings and fears. “Am I the only one that thinks this is kinda weird?’’ he asked. “Virtual graduations?’’ Manning took a trip down memory lane, to his years in college at Ole Miss, alluding to something he almost never addresses — an arrest for public drunkenness as a 19-year old freshman. “The dreaded 8 a.m. classes,’’ he said. “Then there were Scantrons. I still have a recurring nightmare where I show up to take a test and I don’t have a freaking Scantron and nobody will give me one. I remember the first time I saw my future wife. And I remember the first time being in the back of a cop car.

“There were group study sessions and of course the Sunday scaries after the weekend without getting any work done and facing that stressful 12-hour window to complete assignments before Monday. And yeah, I remember trying to remember how long it has been since the last time I washed my sheets.’’

Manning admitted he had difficulties in school. “I’m not the smartest person you’ve ever met, not by a longshot,’’ he said. “School was hard for me all my life, from elementary through college. But I showed up and I was present. That doesn’t take skill. It takes commitment.’’

THAT'S. MY. (former and forever) QUARTERBACK! Out of all the great messages a super successful, underratedly handsome, downright wonderful human being like Eli Manning could deliver, telling a group of kids entering an already uncertain time of their lives during the most uncertain time of all our lives to embrace the awkward is absolutely perfect.

It doesn't matter if you are graduating college, high school, middle school, or even elementary school. Going from the top of the totem pole in life back to the bottom leads to some awkward moments and nobody likes feeling awkward. But you gotta embrace that shit. Being awkward or a little weird or slightly different is nothing to be ashamed of. Those qualities are likely what your true friends like about you the most. I wish I knew that shit when I was younger so maybe I wasn't so scared to take chances or talk to girls until I started relying on booze to help do the job for me. Hell, I didn't even embrace the awkward side of my sports content brain until I saw Big Cat dress as Goldust in a packed bar or Portnoy judge a gerbil contest. Luckily the Class of 2020 has a two-time Super Bowl MVP to let them know it's okay to not only steer into the skid of awkwardness but enjoy the ride because he wouldn't have become the legend he was without the awkward side.

Since this speech appears to be getting so roundly applauded, it begs the question of whether anybody that ever made fun of an Eli Manning for making a funny face or looking awkward on TV should feel ashamed of themselves with the answer being of course! It's 2020 baby. Making fun of someone for being awkward is pretty much a hate crime these days. But our guy Eli never complained from all the haters and hyenas on the internet, likely because he barely knows the internet exists. The fact of the matter is he didn't miss a game due to hurt feelings or hurt body parts. He just kept doing his job and let all the haters snicker at him from their glass houses. Even when the Giants brought in a younger, just as good looking, potential clone of Eli that will win at least as many Super Bowls, Eli didn't run from the awkwardness. He embraced it like Bane embraced the darkness before riding off into the sunset until Canton calls his name in a few years.

What a man. What a legend. What a role model. But what else would you expect from the first ever entrant in the Human Hall of Fame? 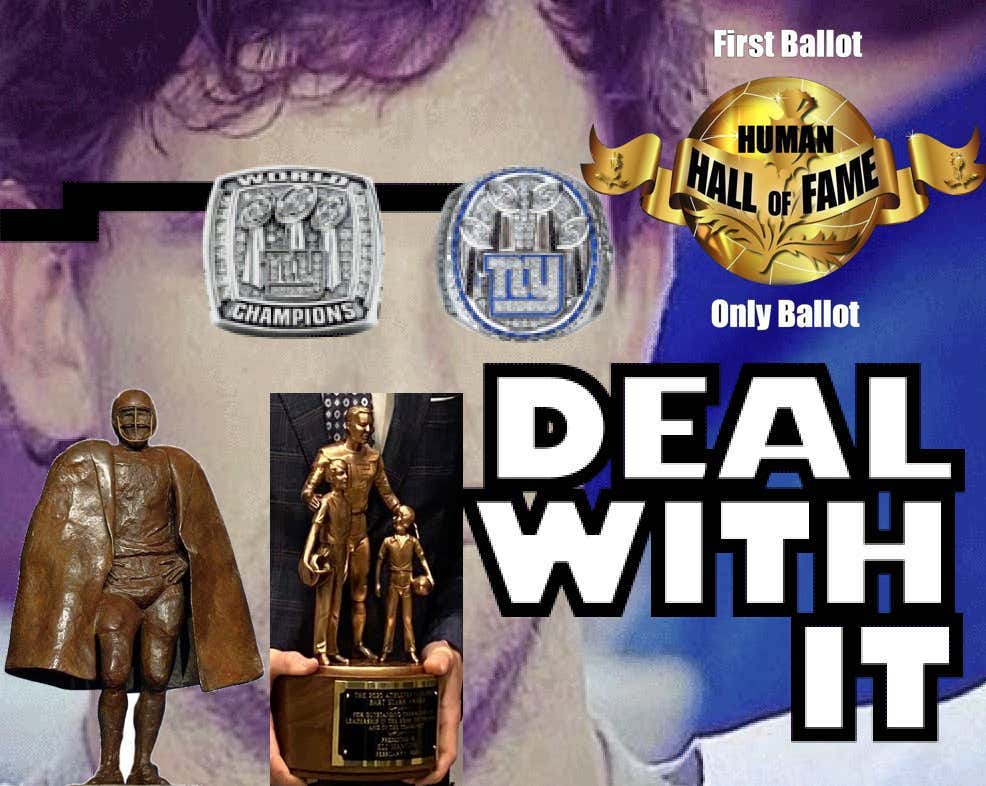